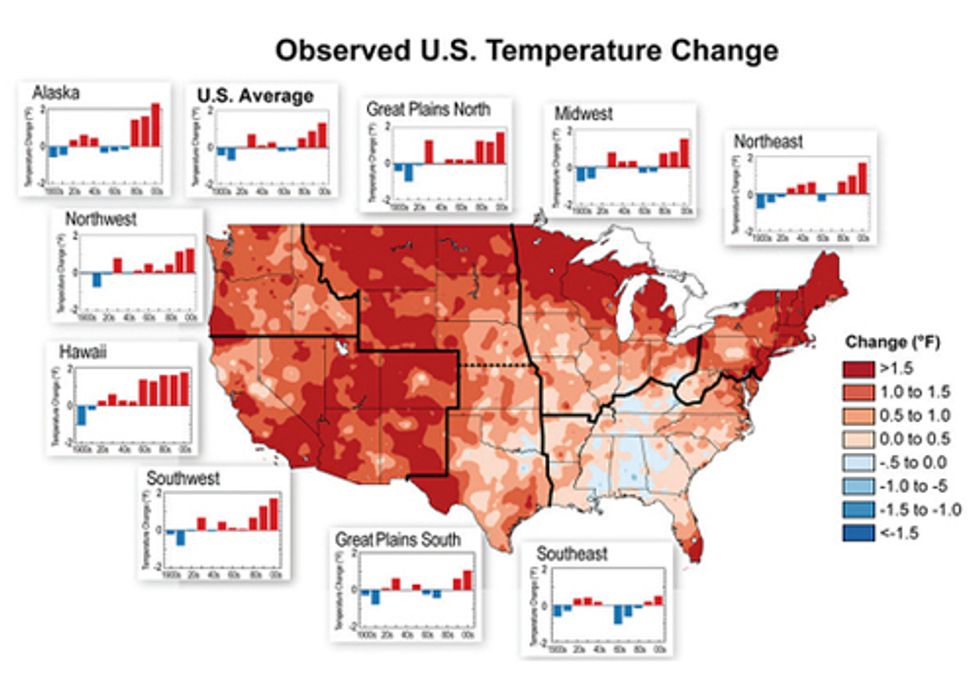 A map depicts temperature changes over the past 20 years, compared to the average between 1901 and 1960. "The period from 2001 to 2011 was warmer than any previous decade in every region," according to the National Climate Assessment.

According to the Letter to the American People provided with the report:

Climate change, once considered an issue for a distant future, has moved firmly into the present. This report of the National Climate Assessment and Development Advisory Committee concludes that the evidence for a changing climate has strengthened considerably since the last National Climate Assessment report, written in 2009. Many more impacts of human-caused climate change have now been observed. Corn producers in Iowa, oyster growers in Washington State, and maple syrup producers in Vermont have observed changes in their local climate that are outside of their experience. So, too, have coastal planners from Florida to Maine, water managers in the arid Southwest and parts of the Southeast, and Native Americans on tribal lands across the nation.

Americans are noticing changes all around them. Summers are longer and hotter, and periods of extreme heat last longer than any living American has ever experienced. Winters are generally shorter and warmer. Rain comes in heavier downpours, though in many regions there are longer dry spells in between.

The report fulfills the requirements of the Global Change Research Act of 1990, which says an assessment of climate disruption must be provided to the President and Congress every four years. The report is coordinated by the USGCRP, a 13-agency working group. But it is written by the National Climate Assessment Development Advisory Committee (NCADAC), an advisory committee that consists of 60 scientists and other experts.

"Climate alarms continued to blare in 2012, which was the hottest year on record in the United States. And destructive superstorm Sandy was one of 11 storms, floods, droughts and heat waves last year that each caused at least $1 billion in damages. The draft assessment warns us that the loss of lives and livelihoods will only get worse, and no part of the nation is safe," said Browner.

According to the Union of Concerned Scientists (UCS), while the report is in draft form and will not be finalized for months, it integrates developments in climate science since the agency’s last report in 2009. The impacts of climate change—including increasingly high temperatures and rising sea levels—are more apparent and extreme impacts are becoming more likely as global emissions rise. At the same time, scientists have been able to more definitively link climate change to human activities and have found that human-induced climate change is causing some weather extremes to worsen. The draft assessment includes a number of new scenarios and maps that examine the consequences of a warming climate for various regions, including increased heat and shifting precipitation.

Scientists continue to study the effects of climate change on specific sectors, such as agriculture and water management, and are producing assessments designed to help policymakers understand their options in the context of other factors, such as economic development and differing needs for rural and urban communities.

“Climate change is already affecting us and there’s a growing demand at the local level for information about what it means for our present and our future,” said Todd Sanford, a UCS climate scientist. “The climate conversation always starts with science. Because policymakers have generally supported policies that increase emissions, successfully adapting to climate change is becoming more difficult.”

A final assessment is expected to be released in 2014. Around the same time, the Intergovernmental Panel on Climate Change will release its fifth assessment report of global climate change through the United Nations.

During the 90-day public review period, local officials, scientists and citizens can make a comment on the assessment. If you have important considerations and comments on the draft assessment, you can comment via the online comment form. The USGCRP will host at least eight town halls in the coming months to gather feedback for its final report.

“The evidence is clear and mounting. The United States sits at the center of the climate crisis. Record heat is devastating crops, rivers are drying up, and storms are bearing down on our cities," said President of World Resources Institute Dr. Andrew Steer. "Climate change is taking its toll on people and their economies, and will only become more intense without a strong and rapid response here in the United States and around the globe. It’s not too late to take action, but given lags in policy and geophysical processes, the window is closing."

“In his second term, President Obama has a chance to ensure his legacy as a leader on climate change. Now is the time for the Administration to move forward with new standards on power plants and other actions to put America on course to a low-carbon future.”