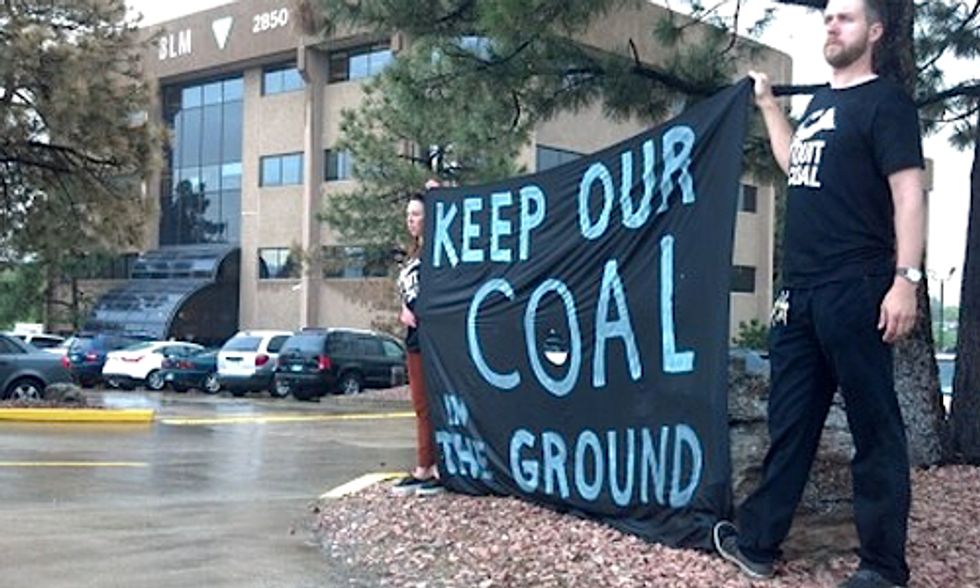 The federal coal leasing program has many flaws, such as cheating taxpayers out of billions of dollars, increasing mining that damages nearby land and water resources, and subsidizing the coal mining industry’s efforts to boost exports. But the biggest problem is that the Bureau of Land Management (BLM) pays almost no attention whatsoever to the very obvious fact that when burned, coal will release carbon pollution and contribute to climate change.

However, thanks to an important recent court ruling, the BLM may now have a tougher time denying its role in unlocking huge amounts of carbon pollution. A federal court last week blocked Arch Coal’s plans to expand a coal mine in Colorado, on the grounds that the BLM failed to consider the impacts of climate change when it approved the mine expansion.

Activists at the Bureau of Land Management's Office in Colorado. Photo credit: Greenpeace

“This decision means that these agencies can’t bury their heads in the sand when confronting the very real impacts of climate change,” said Ted Zukoski, an attorney with Earthjustice, which brought the case along with WildEarth Guardians, High Country Conservation Advocates and the Sierra Club.

Jeremy Nichols, WildEarth Guardians’ Climate and Energy Program director added, “This mine expansion was a lose-lose-lose proposition. We stood to lose our backcountry at the expense of our climate. Thankfully, the feds will have to take into account the costs of carbon pollution before approving more coal mining.”

One key component of the court ruling points to the BLM’s failure to incorporate the federal government’s “social cost of carbon” in its review. InsideClimate reports:

The decision was a significant judicial endorsement of a policy tool known as the “social cost of carbon,” which economists and climate scientist use to put a price in today’s dollars on the damages from drought, flood, storm, fire, disease and so forth caused by future global warming due to our emissions from burning fossil fuels.

The BLM has tried to defend its head-in-the-sand approach to coal leasing and climate change with a variety of excuses, and it’s worth reading through the court ruling for the judge’s rebuttals (key sections are pages 16-32). One that deserves particular attention is the judge’s rejection of BLM’s argument “that the same amount of coal will be burned whether or not” this particular coal lease is approved.

This is a familiar argument from fossil fuel companies and the federal agencies that too often favor their interests, and it has been debated at length in regard to fossil fuel projects such as the Keystone XL pipeline and coal export proposals—check out KC Golden’s post for a good explanation of some of the reasons why this is a weak argument, such as that it:

b.) ignores the x-factor: economic “lock-in” to dangerous climate disruption

This court ruling highlights yet another simple reason why this argument is so absurd when it comes to federal coal leasing – coal competes with other, less polluting forms of generating electricity. The judge writes (page 30):

The production of coal in the North Fork exemption will increase the supply of cheap, low-sulfur coal. At some point this additional supply will impact the demand for coal relative to other fuel sources, and coal that otherwise would have been left in the ground will be burned.

That gets to the core of why the federal coal leasing program is in such need of reform, and why community, health and environmental groups have called on Interior Secretary Sally Jewell to establish a moratorium on coal leasing. Even as the U.S. Environmental Protection Agency moves forward with rules to limit carbon pollution from power plants, the BLM is simultaneously leasing coal at cheap rates, ignoring the enormous damage it will do to our climate and undermining progress toward cleaner forms of energy.

President Obama knows that when it comes to fossil fuel reserves, “We’re not going to be able to burn it all,” and it has been over a year since he reminded us that “someday, our children and our children’s children, will look at us in the eye and they’ll ask us, did we do all that we could when we had the chance to deal with this problem and leave them a cleaner, safer, more stable world?

Instead of heeding those words, the BLM continues to do all it can to subsidize the coal industry at the expense of everyone else. Right after the court ruling came down, it announced plans to hold yet another coal lease sale in Colorado, which would likely give more than 8 million tons of publicly owned coal, at subsidized rates, to the reserves of Bowie Resource Partners—a company that is aiming to boost coal exports from the West Coast.