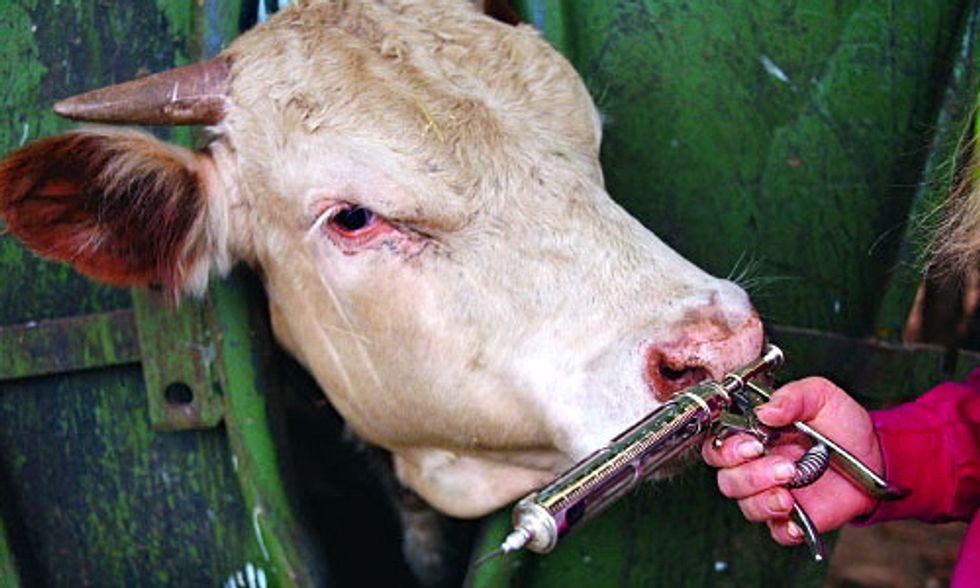 The U.S. Food and Drug Administration (FDA) released a progress report this week on its voluntary approach to reducing the use of antibiotics in farm animals, which relies on collaboration with the pharmaceutical industry, according to the Natural Resources Defense Council (NRDC).

Advocacy groups said the FDA needs to go even further to curb animal antibiotics abuse, including limiting companies that use them for disease prevention when confining animals in crowded conditions. Photo credit: Organic Fitness

The news appeared to be encouraging as the FDA announced 25 major pharmaceutical companies had agreed to voluntarily phase out the use of antibiotics for growth promotion in animals processed for meat.

However, the NRDC publicly voiced its concerns saying the partnership won't do enough to curb antibiotics overuse or stem the spread of antibiotic-resistant germs known as "superbugs."

“There is still no evidence that the FDA’s voluntary plan will do anything to limit the increase in the antibiotic-resistant bacteria that endanger all of us," said NRDC attorney Avinash Kar. "Animals will still be fed antibiotics daily even though they aren’t sick. While it’s good to see FDA and corporations coming to the table on this, their solution doesn’t cut it. Fixing the problem means curbing the misuse of these drugs. This plan is likely to lead to label changes, not a reduction in use."

Kar explained that the FDA guidance does nothing to limit the routine use of antibiotics to compensate for crowded conditions.

“The FDA is just limiting antibiotic use for growth promotion, but the same animals are given the same antibiotics because of the crowded conditions," he said. "Current levels of antibiotic use are likely to continue, but just with a different justification and label. That won’t do anything to protect human health. The bacteria don’t care about the justifications.”

“We don’t add antibiotics to the cereal of kids to prevent diseases in daycare centers, and we shouldn’t be doing this with animals. FDA needs to dramatically reduce antibiotic use in animals. Until that happens, the rest is just window dressing.”

As it stands, about 80 percent of the antibiotics sold in the U.S. are for use in cows, chickens, pigs and other farm animals.

Specific weaknesses in the FDA's Guidance 213 implementation plan include:

According to a 2013 National Centers for Disease Control report, antibiotic-resistant infections sicken at least 2 million Americans per year and kill more than 23,000.

The Associated Press reports the biggest risk to people are germs spread in hospitals, and it's not clear how much of the problem is related to the use of drugs in animals that become meat. Regardless, the FDA contends this is one step toward addressing the problem.