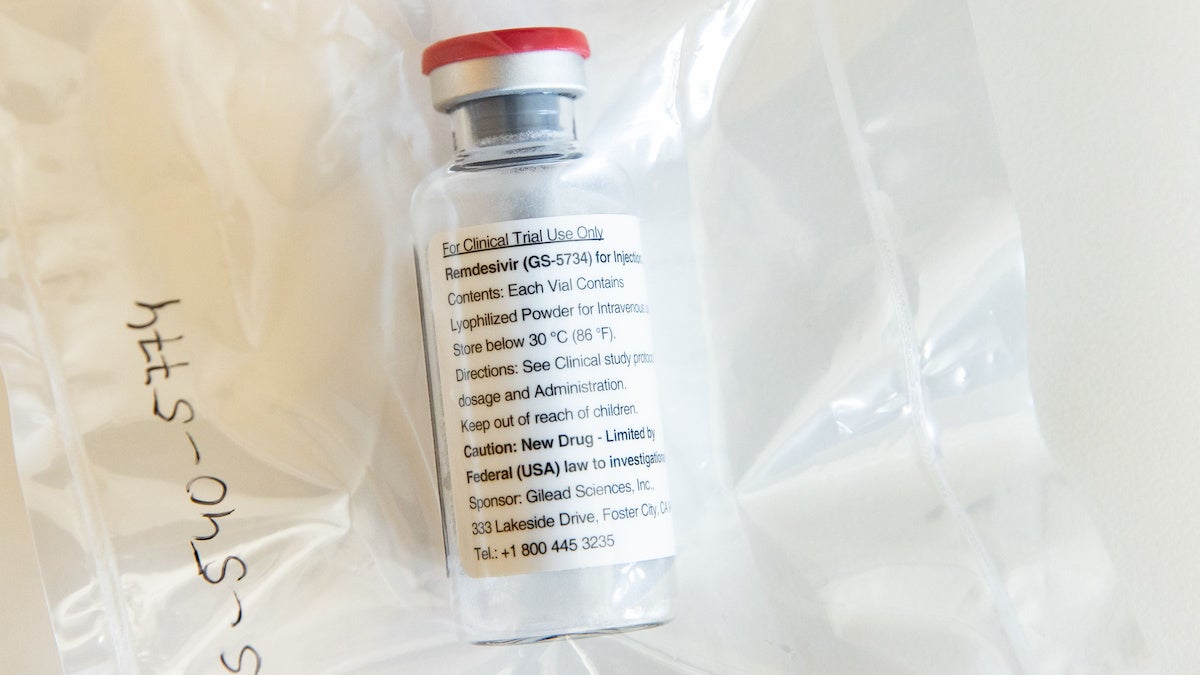 A vial of the drug remdesivir at a press conference at the University Hospital Eppendorf in Hamburg, Germany on April 8, 2020, during the new coronavirus COVID-19 pandemic. ULRICH PERREY / POOL / AFP via Getty Images

Even though the death toll from COVID-19 in the U.S. topped 60,000 on Wednesday, there was a glimmer of good news as a small trial for the drug remdesivir showed promise in helping patients recover faster, as The Washington Post reported.

The FDA said it is in talks with Gilead Sciences, the maker of remdesivir, about making the drug available to patients, according to statement provided to CNN.

“As part of the FDA’s commitment to expediting the development and availability of potential COVID-19 treatments, the agency has been engaged in … discussions with Gilead Sciences regarding making remdesivir available to patients as quickly as possible, as appropriate,” FDA spokesman Michael Felberbaum said in a statement, as CNN reported.

The study showed that patients treated with remdesivir were able to leave the hospital within 11 days, on average, compared with an average of 15 days for patients who had received a placebo. The trial, which was sponsored by the National Institute of Allergy and Infectious Diseases, enrolled 1,063 patients. It gave the patients either the drug or a placebo, as The New York Times reported.

There were also fewer deaths in the remedisvir group, but it was a large enough discrepancy to be statistically significant.

“The data shows that remdesivir has a clear-cut, significant, positive effect in diminishing the time to recovery,” said Dr. Anthony S. Fauci, the National Institute of Allergy and Infectious Diseases, at the White House on Wednesday, as The Washington Post reported. “That is really quite important.”

Fauci admitted that the drug is not a cure, but it opens an important and promising avenue for future study. “Although a 31 percent improvement doesn’t seem like a knockout 100 percent, it is very important proof of concept,” Fauci said of remdesivir, as CNN reported. “What it has proven is that a drug can block this virus.”

The effect that remidisvir has is similar to what Tamilflu does to the flu. It doesn’t cure the flu – it just helps reduce how long people are sick, according to CNN.

Fauci did warn that the results still need proper peer-review, but he was optimistic that remdesivir would become “the standard of care” for patients with Covid-19, according to The New York Times.

It’s highly unusual for data about a drug’s efficacy to be released this early from a preliminary trial. But “whenever you have clear-cut evidence that a drug works, you have an ethical obligation to immediately let the people in the placebo group know so that they can have access,” Fauci said, as CNN reported.

That didn’t pass muster with many in the medical and scientific community. The disclosure of trial results in a political setting, before peer review or publication, is very unusual, said Dr. Steven Nissen, a cardiologist at the Cleveland Clinic who has conducted dozens of clinical trials, to The New York Times.

“Where are the data?” he asked. “This is too important to be handled in such a sloppy fashion,” Nissen said.

Dr. Michele Barry, a global health expert at Stanford University who expressed confidence in Fauci, told The New York Times, “It is unusual to call a drug the ‘standard of care’ until peer review of data and publication, and before studies have shown benefit in mortality.”