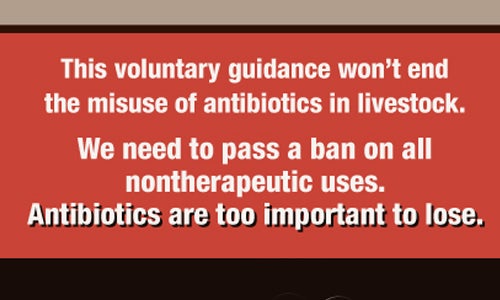 The widespread practice of giving low doses of antibiotics to healthy livestock on factory farms is contributing to an increase in antibiotic-resistant bacteria, which is a growing public health concern that’s making antibiotics less effective in treating infections in both people and animals.

The Food and Drug Administration (FDA) released voluntary guidelines last December to address this issue known as nontherapeutic use. However, a Food & Water Watch analysis released Tuesday reveals that 89 percent of antibiotic drugs that the guidelines advises against using to speed growth can still be given to healthy animals for other reasons.

To assess the overlap between growth promotion uses, which the FDA is limiting, and prevention uses, which remain unchecked, the environmental watchdog analyzed the FDA’s list of more than 400 drug products affected by the federal guidelines.

The FDA’s list includes 217 medically important antibiotic drugs that are known to accelerate animal growth. Of those drugs, 63 percent can also be applied to disease prevention, meaning the drugs can continue to be used nontherapeutically, which will continue to promote the development of antibiotic resistance.

Of the remaining antibiotics used for growth promotion, 59 can still be used for “disease control” in healthy animals. That leaves only 23 drugs—11 percent—with no approved nontherapeutic uses under full implementation of the guidelines.

The analysis comes as the comment period on the Veterinary Feed Directive comes to a close. Currently, most antibiotics sold in livestock feed are available over the counter without veterinary oversight. Under the guidelines, vital antibiotics will be put under the guidance of a veterinarian, but the directive is voluntary.

“Flawed, voluntary guidelines will not stem the tide of antibiotic resistance. We need Congress to take action towards banning the misuse of antibiotics on factory farms.”

Roughly 80 percent of antibiotics purchased in the U.S. are fed to livestock, which helps breed resilient superbugs that are able to spread in the environment, contaminate food supplies and undermine the effectiveness of antibiotics.

These antibiotic-resistant infections sicken at least 2 million Americans per year and kill more than 23,000, according to a 2013 CDC report. The superbug infections can appear practically anywhere, but they’re especially deadly when they’re spread in hospitals, nursing homes or other health care centers.