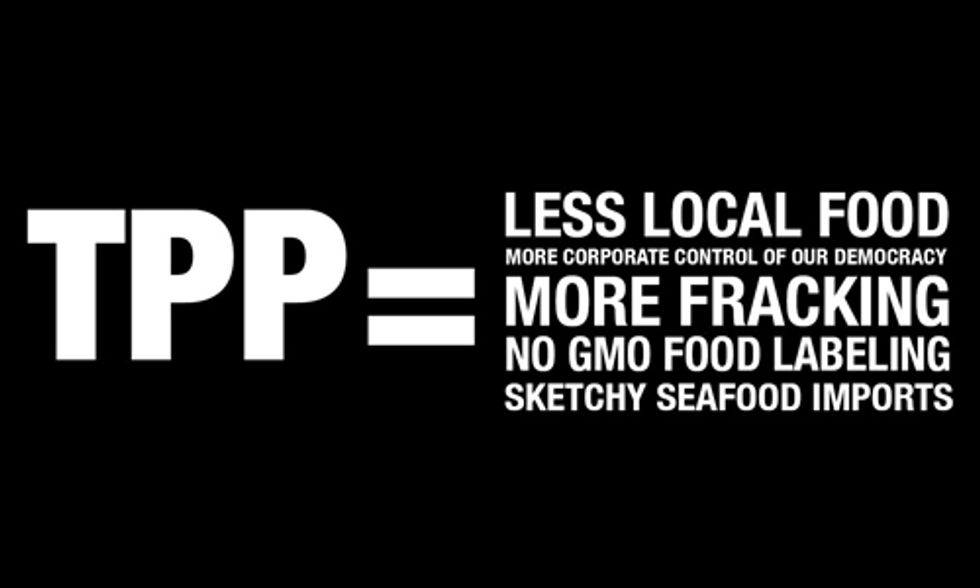 Do you care about having access to local and sustainably produced food or protecting your drinking water? Are you concerned about corporate influence distorting our elections?

If you answered yes to either of these questions, you should be worried about legislation Senator Max Baucus and Rep. Dave Camp recently introduced that would grant the Obama administration fast-track authority.

Those measures would allow the White House to quickly push the Trans Pacific Partnership (TPP) and another trade deal with Europe through Congress with a simple up or down vote.

Fast-track authority would give the Obama administration the unchecked power to promote future trade deals. Those pacts would allow corporations to challenge any democratically enacted federal, state or local laws and regulations that would limit their narrow financial interests.

The TPP and the U.S.-EU Free Trade Agreement are really corporate power grabs disguised as trade agreements containing provisions that would undermine basic consumer rights, including issues related to our food, water and local sovereignty.

The TPP threatens the very essence of our democratic process by promoting the privatization of public resources and corporate self-regulation. It would give companies the ability to overrule local governing bodies on decisions about fracking, food safety, public health and the environment.

It would have disastrous implications for U.S. consumers.

Think corporate lobbying power goes mostly unchecked now? Under the TPP, things would look far bleaker. If a town council voted to ban fracking, the TPP would enable a multinational oil company to sue the local governing body and overturn the ban.

If American consumers demanded that food products containing genetically engineered ingredients be labeled, the TPP would grant a food corporation authority to interfere if the company's profits were limited as a result.

And all of us who have been demanding more sustainable and locally sourced food could see our efforts challenged when big food companies increase the amount of imported food we receive from countries with a history of food safety violations.

The TPP would make it harder for governments to establish their own regulations to protect the environment, rein in financial interests, protect food safety and support renewable energy while protecting us from risky practices like fracking for shale gas.

Undermining the democratic process for making decisions that affect public health and the environment, many of these decisions could be challenged in international pro-corporate trade tribunals, allowing financial interests to dictate how we manage public resources or dismantle the system of federal protections we currently have in place to regulate food and water.

Despite the far-reaching implications of these negotiations, the TPP has mostly been negotiated in secret. More than 600 official corporate "trade advisers" are privy to the specifics in the agreements, even though members of Congress, governors, state legislators, the media and the public haven't had access to the text—well, no access other than excerpts of working drafts on intellectual property and diluted environmental protections that WikiLeaks has released.

It's deplorable that Congress would consider giving up their oversight role and allowing the White House to push for an accelerated timetable for something as critical and far-reaching as the TPP.

Visit EcoWatch’s ENERGY and FOOD  pages for more related news on this topic.