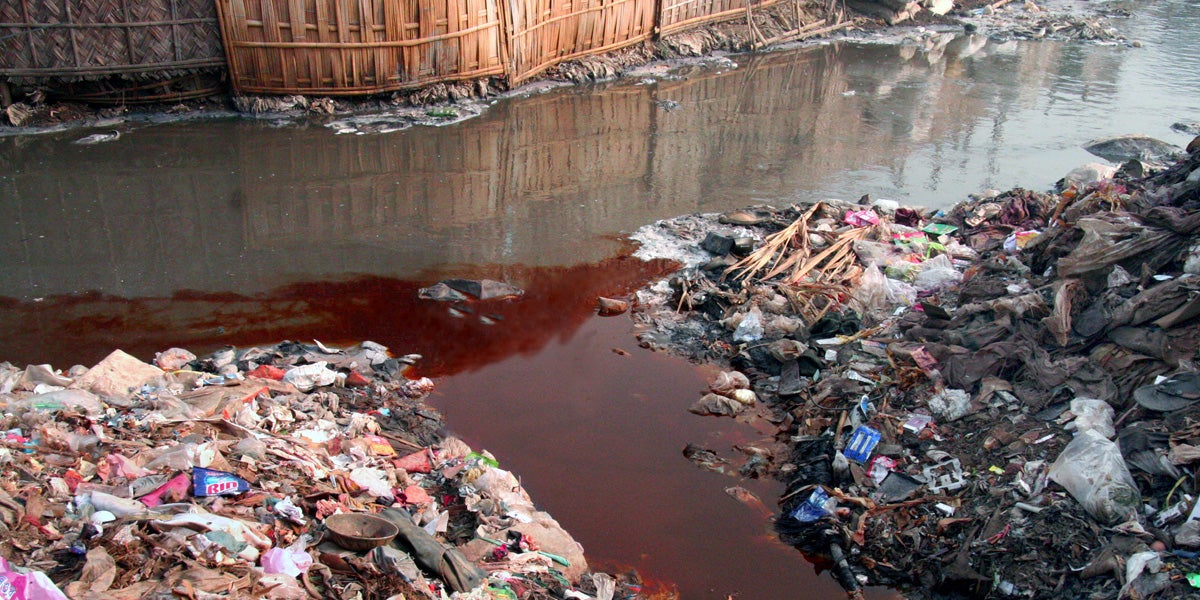 In the opening scene of the new documentary RiverBlue, deep magenta wastewater spills into a river in China as the voice of fashion designer and activist Orsola de Castro can be heard saying “there is a joke in China that you can tell the ‘it’ color of the season by looking at the color of the rivers.”

In China, the factory of the world, it is estimated that 70 percent of the rivers and lakes are contaminated by the 2.5 billion gallons of wastewater produced by the textile industry. This sobering film is being screened worldwide this year, which premiered March 21 to a sold out crowd at the U.S. at the 25th Annual Environmental Film Festival in Washington, DC. The film will be featured at the Cleveland International Film Fest April 3-5 and at many other festivals throughout the U.S., Canada and Mexico.

The film examines the destruction of rivers in Asia caused by the largely unregulated textile industry. It also connects today’s consumer appetite for fast fashion as a cause of this environmental degradation and explores how manufacturing innovation could help solve this global problem.

Co-directed by award-winning documentarians David McIlvride and Roger Williams and produced by Lisa Mazzotta, RiverBlue: Can Fashion Save the Planet was almost three years in the making and follows internationally celebrated river conservationist, Mark Angelo, as he paddles the rivers devastated by a toxic brew of chemical waste from the denim and leather industries. Angelo explained that these waterways in China, India and Bangladesh are devoid of life even as local communities rely on these rivers for drinking and bathing. The water in these rivers has become a public health crisis with a high incidence of cancer and gastric and skin issues afflicting those who work in the industry or live nearby. 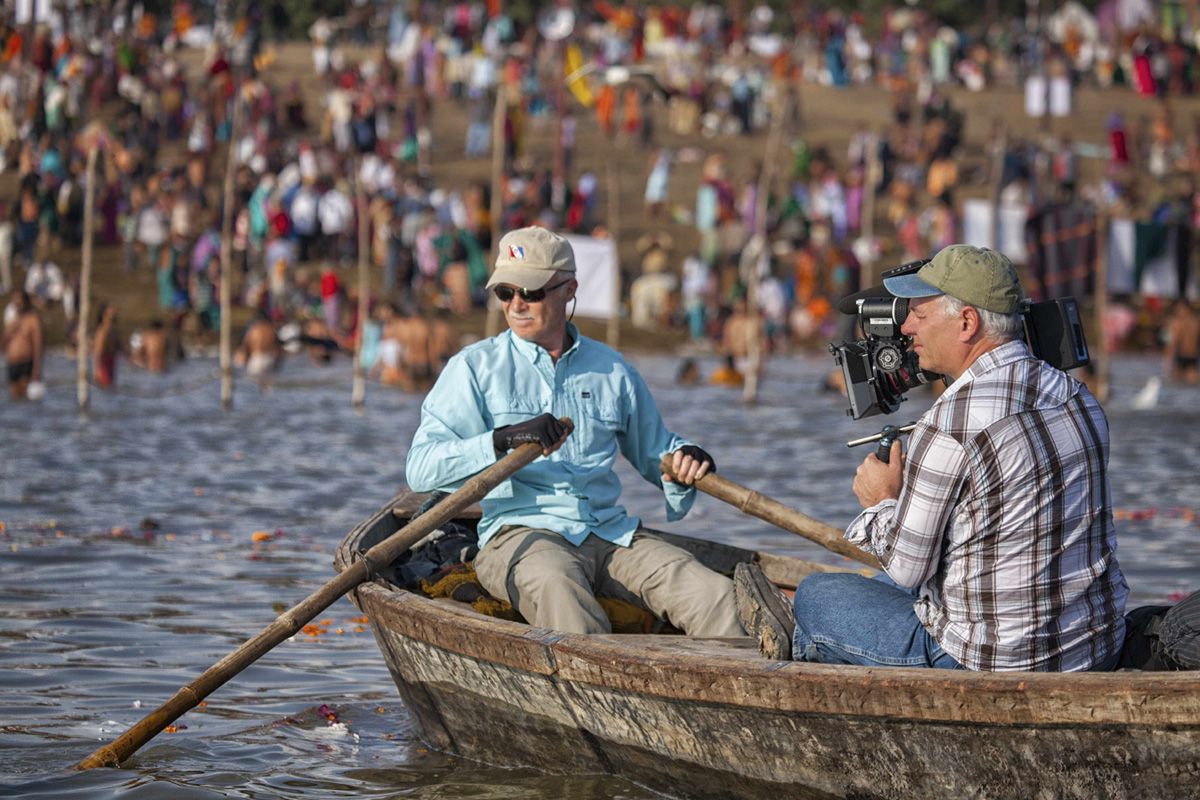 Mark Angelo paddles a river devastated by a toxic brew of chemical waste from the denim and leather industries.RiverBlue

One river the film looks at is the Buriganga in Dhaka, Bangladesh, a city of 50 million, home to a proliferation of textile mills and leather tanneries. This river has become one of the most polluted in the world. The tanneries which supply hides to fashion accessory industries use chemicals that can disrupt the hormonal and nervous systems to those who handle them. In the film, young children are seen working with skins and experts have said this has resulted in long term health problems.

One day while filming there, McIlvride knew what the work they doing was most urgent when they met a local journalist who said to him, “don’t you see you are killing us over here.”

In Kanpur, India alone there are more than 400 tanneries dumping toxic chromium into the water supply which subsequently turns up in cow’s milk and agriculture products.

“We are committing hydrocide,” said Sunita Narain, director general of Center for Science and the Environment in India. “We are deliberately murdering our rivers.”

The question the film poses to viewers: Are brand-name clothing corporations disregarding the environment in their zeal to make their clothes cheaper and cheaper and what role does the consumer play?

“Low cost clothing has a high cost attached to it, one to the environment and public health,” explained Angelo.

The impetus for the film came from a photo McIlvride found online. He and Williams, producer and director of photography, wanted to do a film on rivers. McIlvride found, on Google Images, a photo taken by NASA of China’s Pearl River with a dark blue streak of pollution running through it.

“It was the area of China where most of the blue jeans are manufactured,” he explained. “I thought everyone wears jeans. We could bring this problem to the world stage.”

The team thought if these rivers are being destroyed, what is the human impact? The film drills down to look at how jeans are made, specifically distressed jeans that are so popular now and how the chemicals used in the distressing process have been especially detrimental to workers, rivers and surrounding communities.

This decline has not happened overnight but rather over decades. For the denim industry, it started after the signing of the much talked about North American Free Trade Agreement. From the 1960s to the 1990s, El Paso Texas was the blue jeans capital of the world producing 2 million pair of jeans a week. The North American Free Trade Agreement allowed brands to find cheaper labor outside of the U.S., initially denim manufacturers left for Mexico and subsequently to China, Indonesia and Bangladesh where wages were low and environmental regulations weak.

As prices for denim jeans plummeted and consumers bought more of them, it was the waterways that paid the price. Today, the average American buys four pairs of jeans a year. In Europe they buy 1.5 jeans a year. Now in China’s Xintang province (where the movie’s polluted river photo came from) 300 million pair of jeans are made a year. Consider that one pair of jeans uses 920 gallons of water and many mills produce without water treatment plants.

The solution the film’s producers unveil is two-fold: through brand and mill innovation and consumer education and change.

McIlvride was determined to find brands making jeans without environmental damage. He located the father of distressed jeans: Francoise Girbaud who introduced the eponymous stone washed jean decades ago.

“It took 40 years before we realized what we made and what we did was wrong,” said Girbaud in the film.

In LA now, the designer was trying to re-establish himself as manufacturer of good jeans when McIlvride found him.

“He led us to the Spanish company Jeanologia,” Mcllvride said, “where they distress jeans by engraving images on the fabrics with lasers (light and air) eliminating water without increasing the cost.”

While filming the movie, denim manufacturers barred the filmmakers from shooting inside their facilities. It was not until they edited the film, that an innovative, Milan-based brand allowed them access. Italdenim has put money into water treatment at their mill and created a dye fixant made with chitosan (derived from the exoskeleton of crabs), a substance that is not dangerous for laborers to touch and saves money by allowing reuse of the wastewater.

“Going forward, the leaders of the fashion industry and other industries will have to be much more aggressive in cleaning up and make sure they are not making money off environmental destruction,” said former Greenpeace International executive director Kumi Naidoo, one of the experts interviewed in the film.

Angelo agreed: “I think all corporations have to be accountable for their environmental practices. No one has the right to damage or destroy a river. More within the textile sector have to commit to a fashion industry without pollution. And, the consumer has the power but has to seek out clothing made in an environmentally friendly manner. That would go a long way to improve things.”

McIlvride hopes the movie will be an agent of change and thinks teens and college students, who buy the most fast fashion, are the ones who can make the most change.

“They are the ones who should know about this and try to cut back on their consumption. If they see the impact of these retailers, I think they would be receptive to change because they are socially conscious,” he said. “We want this to have an impact on the consumer level. We want consumers to ask themselves, ‘do you really need to buy more clothes.’ Consumerism is the problem.”

We are hoping we are taking the same route that the organic food movement took. When consumers learn more they will make different choices.

Kathleen Webber is a journalist who has covered fashion for more than 20 years.