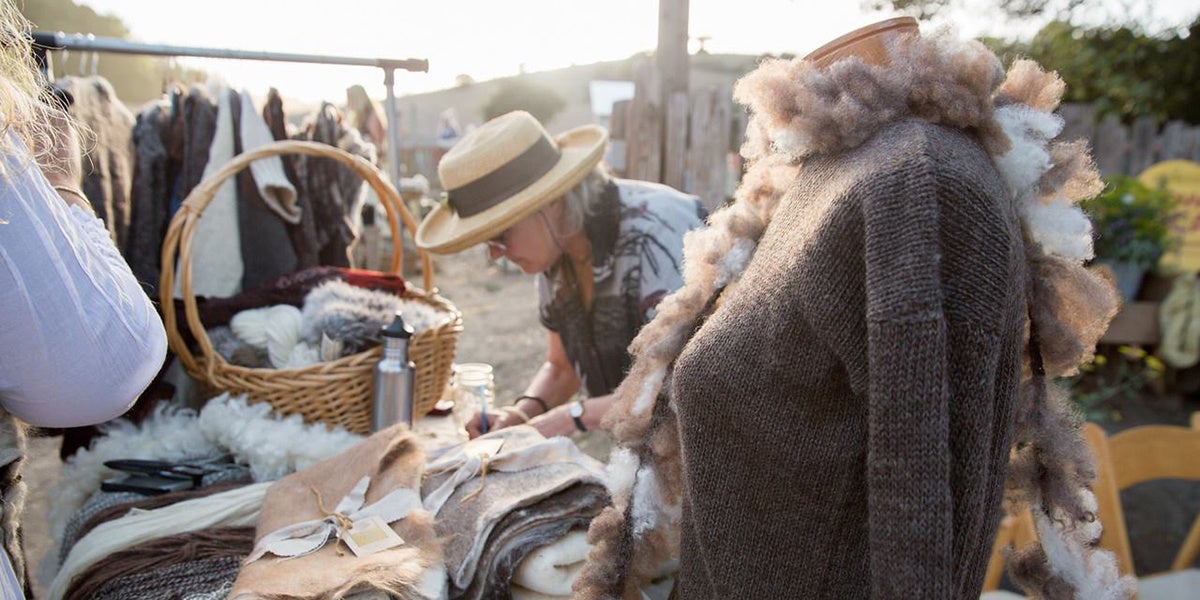 Do you know where your clothes came from?

No, not the store, the label or the brand. Or China, India or Vietnam.

Chances are, you don’t. And that’s a problem. It’s difficult for people to have respect for an item or the people who created it when they don’t know where the item came from or how it was created in the first place.

For instance, did you know your athletic gear is probably made from plastic? And that 94 percent of U.S. drinking water has plastic lint from our clothing in it? You’re literally washing the plastic from your yoga pants into our water systems. Polyester, acrylic, nylon, spandex—it’s all plastic. Ninety-eight million tons of oil was used in the textile industry in 2015. By 2050, that number is expected to be 300 million.

And cotton is no easy solution, using 16 percent of the world’s insecticides. Pesticides can then become concentrated in the cotton—like tampons, or returned to the food supply via cottonseed.

When Bena Burda, founder of organic apparel company Maggie’s Organics, learned about the harms of cotton, she was horrified. She was working in the organic food industry and thought, “This is ridiculous. How can we not know this?”

Enter regenerative fiber, a movement to return the entire system of clothing—from agriculture to product and back again—to within 250 miles of where you live. It is a solution to the large-scale, global exploitative textile system: It has components rooted in the local, community-based economy, with local farmers cultivating organic fibers—wool, cotton, alpaca, hemp—and developing the processing required to bring it from field to fabric, fabric to product.

You see, fashion—as you know it and as you’re probably wearing it, right now—is exploitative and unsustainable, said Anna Canning, communications coordinator at Fair World Project, an organization that advocates for policy solutions like a living the wage.

“You have a lot of exploitation in factories around the globe,” she said, pointing to low pay, long hours and forced labor, often of women. In addition, fashion contributes to climate change. She said the industry “is on track to consume a quarter of the global carbon supply by 2050.” Fashion itself is also resource intensive and disposable.

Worse, our nation has seemingly lost the ability to produce its own ethical fiber. “There’s only one non-GMO [cotton] gin in the country,” said Rebecca Burgess, executive director of Fibershed, an organization focused on educating the public on the environmental, economic and social benefits of bringing the textile supply chain home. “We can’t even wash our fibers in California.” The U.S., she said, has “an inability to process fiber in an ethical way.”

The 150-Mile Wardrobe: A Solution for One of the World’s Most Polluting Industries https://t.co/JtFdWNeLd3 @GreenNewsDaily @GOOD @diana_dehm_snae

In the last century, due to neo-liberal policy and the frictionless moving of capital, our entire nation’s ability to foster local fiber systems and cultivate local textiles has been exported to the point where even the memory of how to make textiles has been extinguished, said Burgess.

When the U.S. lost the textile industry, it lost the memory of how to build these systems, and even the ability to innovate within them. “The textile industry is a relic from the late 19th and early 20th century, so when we go back to re-envision bringing it home, we’re working on American equipment built in the 1920s.”

Much of Burgess’s work is around building sensitivity and awareness about what it will take to return local textile industries to the United States. “We need to repair cultural and political divides,” she said. “If we can … bring these fiber systems back into the communities, and re-envision what that looks like,” that can lead to an enormous shift for rural and urban communities alike, especially when the goal is developing these systems with family farms and worker-owned co-operatives.

Doing that holistically then fosters diversity from the farm to your yoga mat. “In an adept system,” said Burgess, “you could combine inter-species yarn that would replace our reliance on fossil-carbon fiber.”

Burgess sees inter-species fiber blends as a solution: combining plants and animal blends such as wool-hemp blends, or wool-alpaca-cotton, all in one yarn. Plastic athletic wear can be replaced with such yarns and fabrics, which can then reduce the amount of plastic that sheds into our oceans and fresh water. She points to “pre-Columbian, Roman-Greek recipe blending. There’s a long history of it. We just forgot about it.”

“We call it the soil to soil framework,” she explained. It’s a cycle: What’s coming out of the soil and how you’re treating the soil. Creating the structures to harvest, clean and move material off-farm and into cooperatively owned mills. Moving textiles to locally-owned cooperative manufacturers. Distributing to consumers. Consumers who are able to care for and mend the product. And then, at the end of its life, the clothing can be recycled or composted and returned to the soil—without further polluting or damaging the land.

There are few of these regional fiber systems in existence today in the U.S., but Burgess and similar groups are working to change that. “We have farms and brands and manufacturers that have pieces of it. It’s a fledgling system. It needs a lot of support from the consumer.”

People, she said, need to seek out local fibers and locally made clothing the way they have sought out and found local farmer’s markets.

Many Americans today, however, can’t afford to shop at farmer’s markets, let alone locally made clothing. If they do shop at a farmer’s market, they often take advantage of “SNAP match” programs some markets offer, where you get a dollar to spend for every food stamp dollar you use at the market. These same folks might want to engage in local, regional fiber—but at $95 for a scarf, that might not seem feasible.

“If you don’t have a lot of income, you can learn how to mend,” said Burgess. It then becomes all about slowing down the fast fashion machine. Currently, 87 percent of the clothing we consume ends up in a landfill or incinerated.

Canning approaches the issue from a fair trade perspective. “The reality is, these movements are all working for a just economy for all people. It is an investment to purchase something that takes into account the full cost of production.” Especially American-made production.

“Americans have a long way to go on their behavior to understand what it takes to make a garment and what those things will cost,” said Burgess.

And once that’s understood, perhaps we can bring the textile and garment industries home.

Ways you can divest from fast fashion:

2. Wear your clothes a lot more. If you see a hole or lose a button, fix it, or find someone in your community who can fix it. Barter or trade to get the job done.

6. Start paying attention. Read the tag. What does it say?

7. Know who made your clothing. Know who sewed it.

8. Learn to make your own clothing. There are so many people who remember how to do this, and we would be wise to learn from them while they’re still with us.