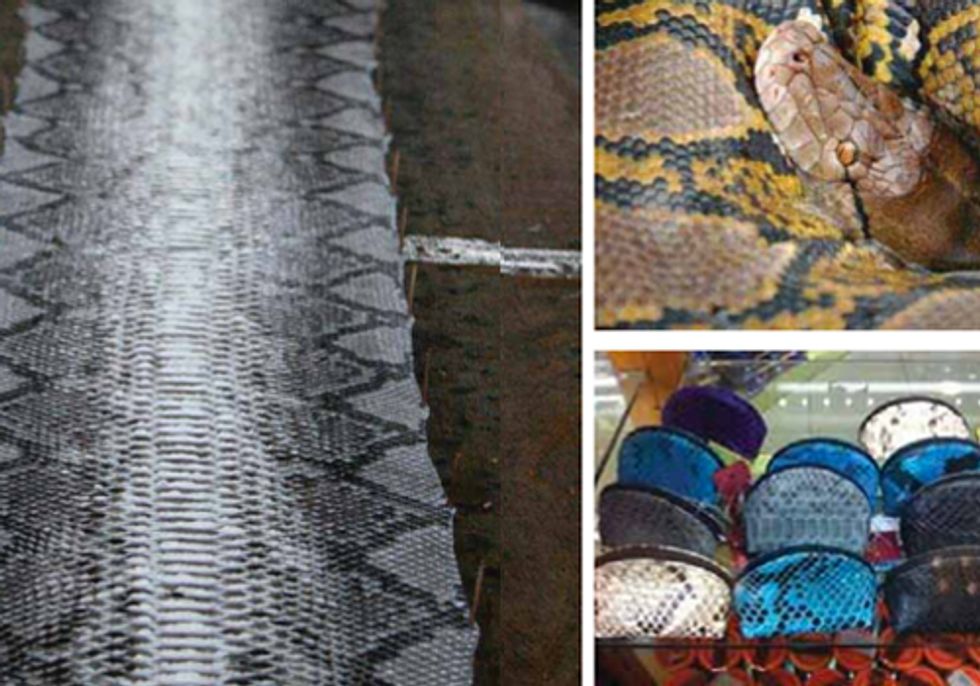 A new study finds that close to half a million python skins are reported as exported annually from Southeast Asia. The main importer is the European fashion and leather industry. The study raises concerns over the illegality in parts of the trade, animal welfare issues and the trade’s impact on the conservation of python populations.

The report, Trade in South-East Asian Python Skins, was launched today by the International Trade Centre (ITC), in co-operation with TRAFFIC and the International Union for the Conservation of Nature (IUCN), and reveals that the trade in python skins is worth an estimated U.S. $1 billion annually.

Alexander Kasterine, head of ITC’s Trade and Environment Program, said: “The report shows that problems of illegality persist in the trade in python skins and that this can threaten species’ survival. The fashion and leather industry has a stronger role to play in supporting Convention on International Trade in Endangered Species of Wild Flora and Fauna (CITES) and developing countries to ensure supply is legal and sustainable.”

Indonesia, Malaysia and Vietnam are the main sources of exports of python skins, with European Union countries–in particular Italy, Germany and France–the biggest importers. Around 70 percent of all python skins are re-exported via Singapore. The report notes that a lack of transparency concerning undisclosed stockpiles in Singapore could be facilitating the laundering of illegally sourced skins.

Tomas Waller, the chair of the Boa and Python Specialist Group (BPSG) of IUCN added that “it would appear a substantial proportion of the skins in trade are sourced illegally from wild animals, beyond agreed quotas and using false permits to launder the skins.”

“With potentially large mark-ups along the supply chain, there is a strong financial incentive for illegal trade in python skins and considerable scope for traders to issue false permits,” said Olivier Caillabet, program officer with TRAFFIC in Southeast Asia and a co-author of the report.

Although more than 20 percent of exports of reticulated python skins from Southeast Asia (mainly Vietnam and Lao PDR) are declared as captive-bred, the report argues that the “commercial case is not convincing and needs to be specifically assessed,” noting that the cost of breeding, feeding and maintaining the snakes to reach slaughter size appears much higher than the market price.

The report recommends that the fashion industry implements a traceability system to demonstrate to consumers that its sourcing is legal and sustainable. The system would complement the existing CITES permitting system, to allow identification of skins along the length of the supply chain.

An additional concern regards the possible lack of sustainability of sourcing. Large numbers of wild pythons are slaughtered before they reach the reproductive stage, meaning harvest quotas may have been set at unsustainable levels. The report recommends a precautionary approach is applied to harvesting, with legally binding minimum skin size limits to ensure protection of immature snakes.

The report highlights previously unknown slaughter methods, yet argues that trade bans are not an effective or fair way to address illegality and animal welfare issues.