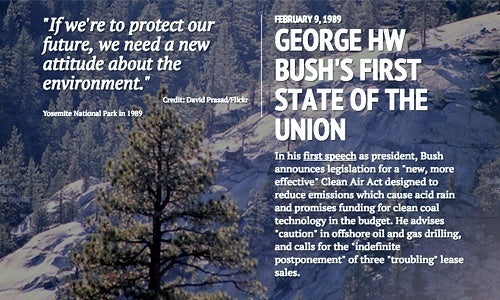 Climate change hit the mainstream in the U.S. after NASA scientist James Hansen told Congress in 1988 that the world was warmer and mankind was to blame.

It was an influential moment, but America’s presidents took a while to catch on.

Every year, the U.S. president fulfills his constitutional duty to provide a State of the Union address, where he updates Congress on the condition of the nation and outlines his legislative agenda for the coming year. All these addresses since George Washington are listed on the American Presidency Project.

But despite the warnings of Margaret Thatcher in the late 1980s, a hefty report from the UN’s science panel in 1990 and a new UN climate treaty in 1992, climate change was not explicitly included in a State of the Union address until 1997, when it was brought up by Democratic president Bill Clinton.

President Obama, also a Democrat, will deliver his final State of the Union address today, and it is expected to include climate change, which he has increasingly prioritized throughout his presidency.

Carbon Brief has created a timeline summarizing how climate and energy feature in all of the State of the Union addresses since 1989. This encompasses the entire presidencies of George HW Bush, Bill Clinton, George W Bush and Barack Obama.

We have also included key events that have shaped how the world, and in particular the U.S., sees the topics of climate change and energy.

The last three decades have been eventful for Americans. They have witnessed the fall of the Soviet Union and the end of the Cold War, the war in Iraq and the 9/11 terrorist attacks, and the 2008 financial crisis.

Despite few specific references to climate change, energy and environmental issues have appeared in almost every State of the Union address since 1989.

And it’s not just Democratic presidents that have championed the cause of cutting greenhouse gases and promoting renewable energy and clean technologies.

The rhetoric emerging from leading Republicans today gives the impression that the party stands against taking action on climate change.

All candidates for the 2016 presidency have expressed skepticism about the science of climate change to varying degrees and have sought to downplay the impact of the UN climate deal recently signed in Paris. Congressional Republicans have attempted to block foreign climate change aid and Obama’s landmark Clean Power Plan.

Scroll through our timeline to explore almost 30 years of presidential pronouncements on climate change and energy.