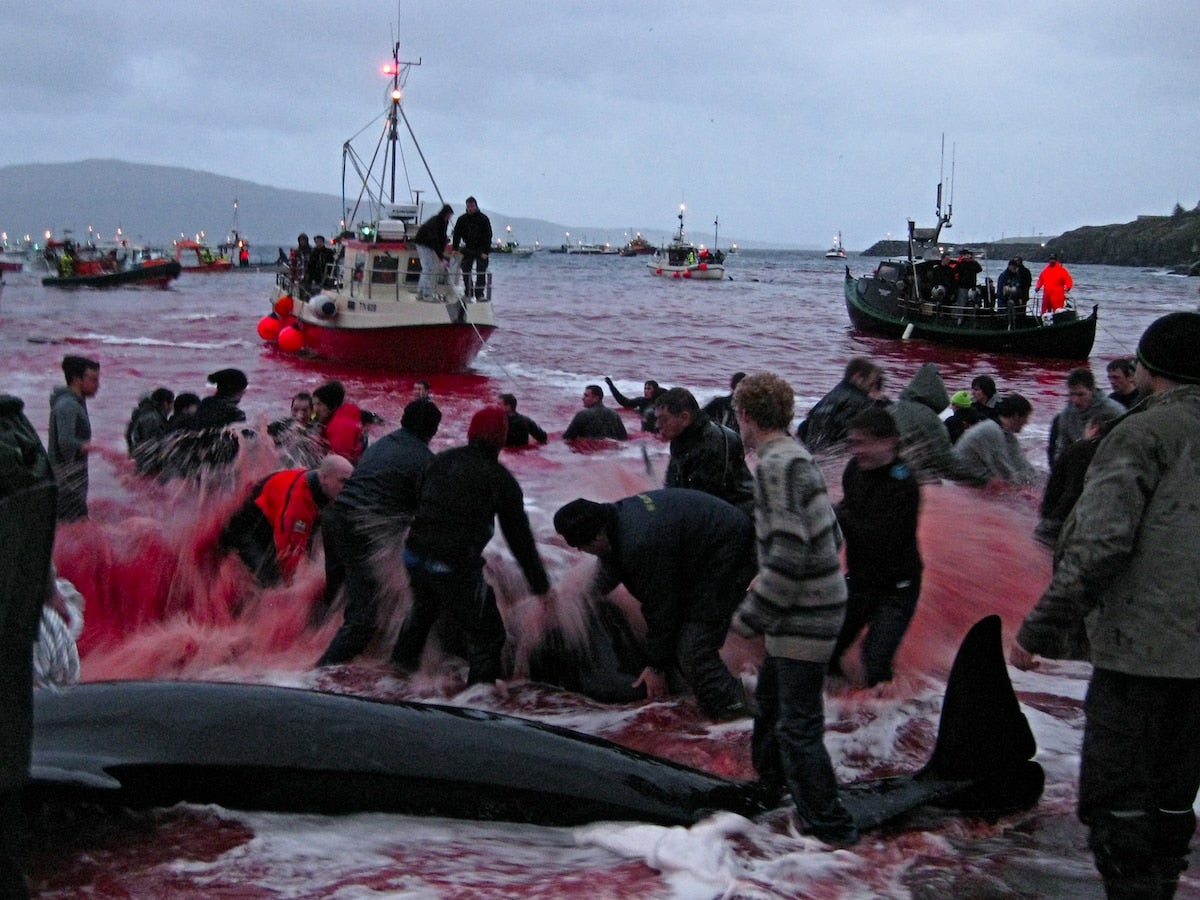 The sea is red with blood in a scene from the traditional hunting of pilot whales in the Faroe Islands. Jan Egil Kristiansen / Moment / Getty Images

In September of last year, a record massacre of 1,428 dolphins in the Faroe Islands shocked and outraged animal lovers locally and around the world.

In response, the Faroese Ministry of Fisheries has proposed a limit of 500 white-sided dolphins for 2022 and 2023, but animal welfare advocates argue that number is far too high.

“This announcement by the Faroese government is farcical,” Orca director Sally Hamilton said, as The Guardian reported. “What the Faroes have done is formalise something that was previously unformalised – sanctioning the slaughter when it was never previously clear how many dolphins would be killed annually – if any at all.”

The Faroe Islands are autonomous islands in the North Atlantic that practice a hunting tradition called “grindadrap” or “grind,” in which pilot whales or dolphins are driven to the beach by participants in fishing boats and then killed on the shore with knives, according to Al Jazeera. This practice is controversial both locally and globally, and the controversy came to a head last year when Sea Shepherd posted images of the slaughter of almost 1,500 dolphins. Nearly 1.3 million people signed a petition to the Faroese government demanding the hunt be banned, and the Faroese government said it would review the dolphin hunt in February.

“It has been acknowledged that aspects of that catch were not satisfactory, in particular the unusually large number of dolphins killed,” the government said in announcing the potential quota. “This made procedures difficult to manage and is unlikely to be a sustainable level of catch on a long-term annual basis.”

The government also said that it believes its people have a right to “utilize the resources of the sea sustainably,” including marine mammals like pilot whales and dolphins. It argued that, because there are around 80,000 white-sided dolphins in the Faroe Islands, a catch of around 825 per year would be sustainable. In practice, hunters have actually killed around 260 per year.

The advocacy group Stop the Grind argued that the suggested quota was inadequate for three reasons:

“The adoption of a quota is meaningless without effective governance and a demonstrated reduction in the number of dolphins and whales killed by the Faroese each year,” the group wrote.

Orca head of partnerships Steve Jones also argued that white-sided dolphins were not part of the traditional hunt in the same way as pilot whales, according to The Guardian. In fact, 83 percent of Faroese residents support hunting pilot whales but 53 percent are against hunting white-sided dolphins, according to a poll taken after last years’ killings.

“To establish a quota is formalising a hunt that didn’t exist as a traditional hunt previously, and which surveys have shown that Faroe Islanders do not want,” Jones said. “It is a worrying trend towards a hunt that is not sustainable. There is no market for white-sided dolphin meat.”

The government began taking public comments on its proposal July 8 and hopes to implement it by July 25.

New Study Looks at Impact of Offshore Wind on Coastal Ecosystems
Offshore wind farms can have an impact on the marine
By Olivia Rosane
Climate-Denying Groups Use Right Whales as Front to Oppose Offshore Wind
One common tactic of renewable energy opponents is to emphasize
By Olivia Rosane
Will Paris Ban Electric Scooters?
Could the City of Light ban the electric scooters that
By Olivia Rosane