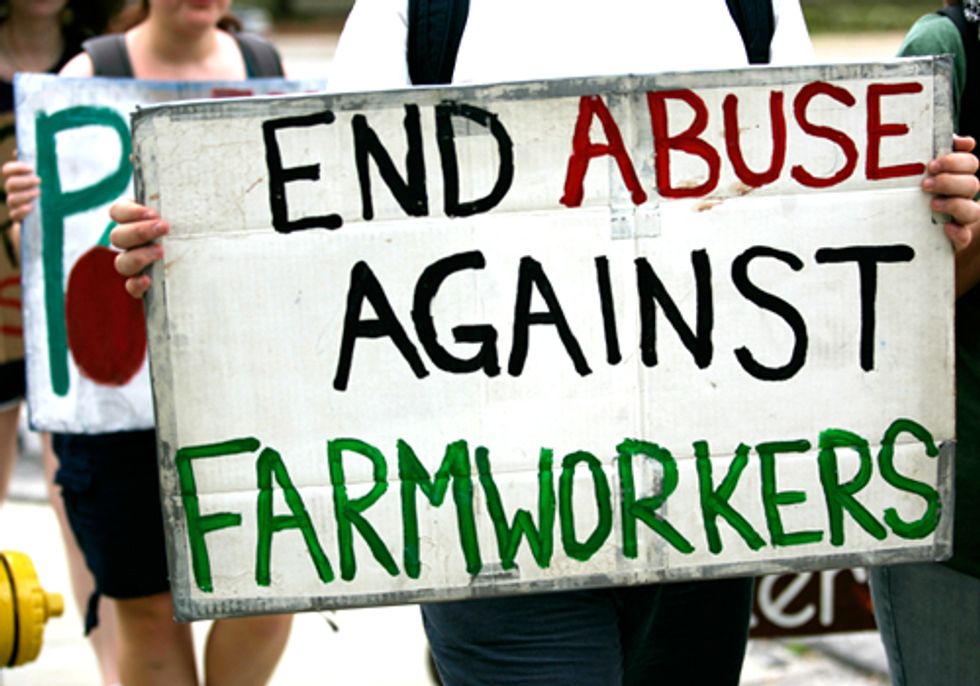 On Monday morning, March 5, farmworkers (the men and women who harvest the Florida's $620 million tomato crop), Reverend Michael Livingston (former president of the National Council of Churches and current director of the NCC's Poverty Initiative), other religious leaders, students and consumers from Florida and beyond began a 6-day fast insisting that Publix—Florida's largest corporation—finally recognize the humanity of the workers who pick its tomatoes and join the Coalition of Immokalee Workers' (CIW) Fair Food Program.

The Fair Food Program is a unique partnership among farmworkers, tomato growers and ten leading food retailers—including Publix competitors Whole Foods Market and Trader Joe's—that advances both the human rights of farmworkers and the long-term interests of the Florida tomato industry as a whole. It is the first large scale program for real, lasting social accountability in the domestic produce industry.

For generations, farmworkers in Florida have been among the country’s worst paid, least protected workers. That exploitation has been driven, in large part, by companies like Publix. Retail food giants have wielded their unprecedented market power to demand artificially cheap tomatoes from their suppliers. At the farm level, this downward pressure on prices has resulted in a thirty-year, downward spiral of farmworker wages and working conditions.

“While, for decades, there was no alternative to this structural farm labor exploitation, Publix could wash its hands of any direct accountability for the brutal working and living conditions faced by Florida's farmworkers,” said Gerardo Reyes of the CIW. “But that has changed. With the CIW's historic agreement with the Florida Tomato Growers Exchange in 2010, and the subsequent implementation of the Fair Food Program on over 90 percent of Florida's tomato farms, the opportunity exists today to right a wrong that has plagued the food industry for generations, to end Florida's Harvest of Shame.”

“Yet, despite this opportunity to do the right thing—to support a proven model for social responsibility that is already backed by ten other retail food giants just like Publix—Publix has refused to do its part, turning its back on farmworkers and on its customers who, in massive numbers, have demonstrated their support for farm labor justice,” continued Reyes. “Instead, Publix is deliberately choosing to continue to do business as if it were the last century, continuing to enrich itself at the expense of the state's most exploited workers. In other words, by turning its back on the Fair Food Program, Publix has moved from passively profiting from farmworker poverty to affirmatively perpetuating it. This is an amoral and fundamentally indefensible choice. As workers we cannot allow that choice to stand. And that is why we will be going without food."

“We want Publix to recognize our humanity,” said Nely Rodriguez of the CIW. “We want the people who run Publix to sit at the table with us and look us in the eye and tell us what good reason they have for not joining the Fair Food Program. We want Publix to explain to us how they can claim to be a responsible neighbor given the way they have behaved toward farmworkers and misled their customers for the past several years. I don't believe they would be able to look us in the eye and justify these things. And if not, they need to come forward and do what is right.”

“What I don’t like is the arrogance of their leadership… and their unwillingness to even sit down and talk with the CIW leaders,” adds the Rev. Bernice Powell Jackson, a pastor with the First United Church of Tampa, and President of the World Council of Churches from North America since 2004. “In every situation that the workers of CIW have encountered for a decade now, when they are able to sit down and talk with the heads of fast food conglomerates, tomato grower associations and food supply companies, they were able to see each other’s humanity and dignity and to find a place of agreement. Yet Publix leadership refuses to sit down or to talk, which only says to me they know that theirs is a morally indefensible position and they can’t look the workers in the eye.”

For more information and the latest on the 6-Day Fast for Fair Food, click here.

The Coalition of Immokalee Workers is a community-based farmworker organization headquartered in Immokalee, Florida, with more than 4,000 members. The CIW seeks modern working conditions for farmworkers and promotes their fair treatment in accordance with national and international labor standards. Among its accomplishments, the CIW has aided in the prosecution by the Department of Justice of six slavery operations and the liberation of well over 1,000 workers. The CIW’s Campaign for Fair Food has won unprecedented support for fundamental farm labor reforms from retail food industry leaders, with the goal of enlisting the market power of those companies to demand more humane labor standards from their Florida tomato suppliers.