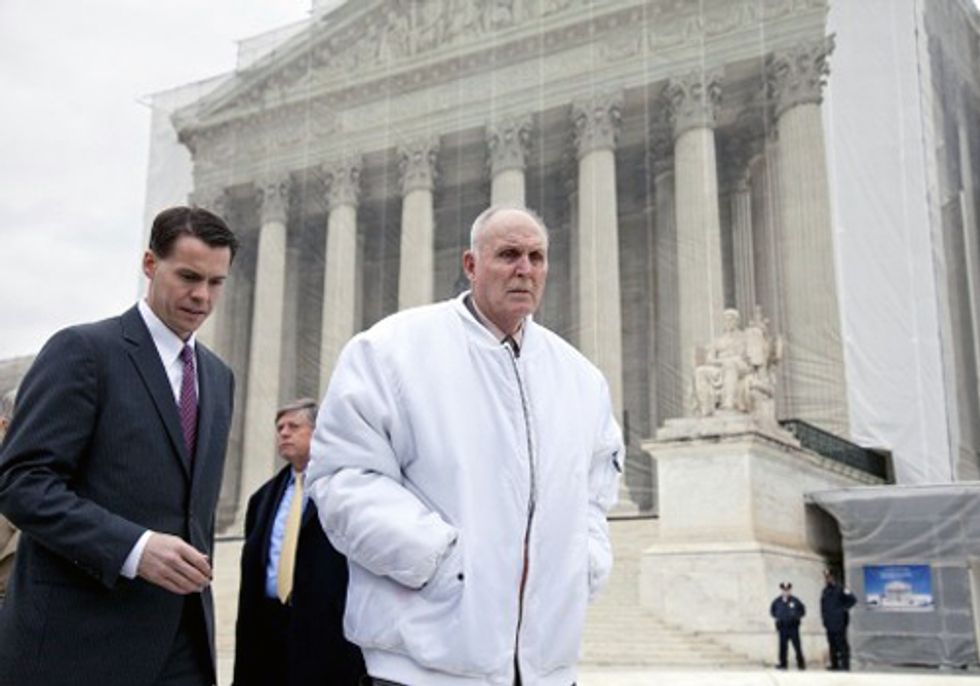 [Editor's note: Yesterday, the U.S. Supreme Court appeared likely to side with Monsanto Co. in its claim that an Indiana farmer violated the company's patents on soybean seeds that are resistant to its weed-killer. The court is expected to rule on the case by the end of June.]

Vernon Hugh Bowman, a 75-year-old Indiana soybean farmer, accompanied by his attorney Mark Walters, outside the Supreme Court in Washington yesterday after the U.S. Supreme heard arguments in the case Bowman v. Monsanto.

The 75-year-old Indiana soybean farmer Hugh Vernon Bowman is facing off with Monsanto in front of the Supreme Court. Five years ago, Monsanto sued Bowman for seed patent infringement and won. Now the high court is hearing the farmer's appeal.

Monsanto's aggressive pursuit of patent infringement lawsuits like Bowman v. Monsanto is well documented in a recent report by the Center for Food Safety and Save Our Seeds. As of January 2013, the corporation had filed 144 suits against 410 farmers in 27 states. Corn and soybean growers across the country will be watching the outcome of Bowman v. Monsanto case very closely.

For years now, farmers have been forced to pay for ever-more expensive seeds that don't perform as advertised and are increasingly the only market-viable (i.e. "elite") seeds they can find. When they look to other seed sources, they are dogged by patent infringement lawsuits.

Taking a stand against Monsanto's harassment of farmers, Bowman continues to assert his right to save seed and rejects the corporate giant's claims that he violated patent law.

The crux of the case hinges on whether Monsanto’s patents on genetically engineered (GE) plants ever expire. As Andrew Pollack writes in the New York Times:

"At stake in Mr. Bowman’s case is whether patents on seeds—or other things that can self-replicate—extend beyond the first generation of the products."

Bowman readily admits that he bought conventional seed mixed with Monsanto’s RoundUp Ready seed from a grain elevator, planted it and then saved the next generation of seed. He acknowledges that he deliberately saved the seed (as farmers have done for thousands of years), and even admits he knew he was saving seed from RoundUp Ready plants, because those were the only plants in his field that had survived his application of Monsanto’s flagship herbicide, RoundUp.

But Bowman maintains that he has done nothing either wrong or illegal, because:

A chink in Monsanto's armor

Back in 2008, the Supreme Court decided there are limits to just how far a patent-holder can go in forcing those further down a supply chain from continuing to license their patents. The limit is known as “patent exhaustion,” and Monsanto is demanding it be released from this limitation.

If the Supreme Court finds in favor of the corporation in Bowman v. Monsanto, then the patents will never expire and Monsanto will retain control of their seed in perpetuity.

If the Court finds in favor of Bowman, Monsanto will still hold most of the cards in the deck, but farmers will have reclaimed a small amount of control.

The Supreme Court's decision on Bowman v. Monsanto case will impact the livelihood of countless farmers.

History of a bully

Over the years, Monsanto has committed tremendous resources to watch-dogging farmers and pursuing litigating: 75 employees and a dedicated $10 million dollar budget as of 2003, according to the Ceneter for Food Safety report released last week.

Report authors also cite that by the end of 2012, Monsanto had received more than $423.5 million from patent infringement lawsuits against farmers and farm businesses, although "depicting the full scope of the industry’s pursuit of farmers is nearly impossible because many cases are settled by confidential out-of-court settlements."

If the Supreme Court decides in favor of Bowman in this suit, it will set an important precedent and potentially curb Monsanto's ability to legally harass farmers across the U.S.