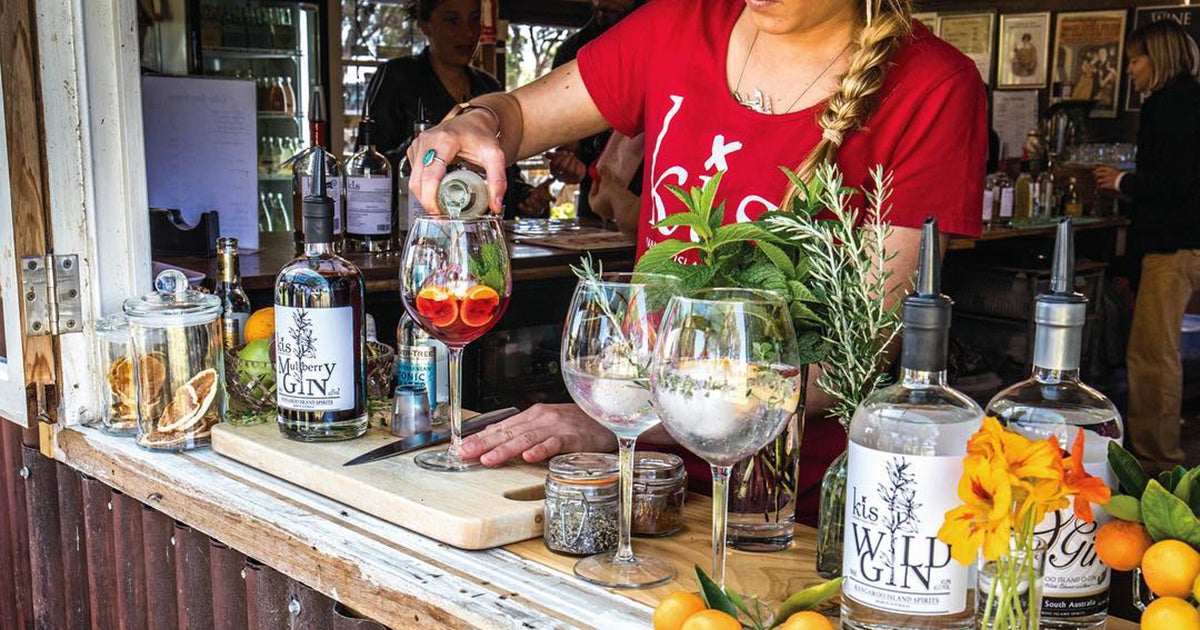 On an expansive property on the gloriously wild Kangaroo Island, near the western shore of the island’s Eastern Cove, I stood in the middle of a large garden and practically inhaled a clipping of olearia (also known as wild rosemary). The scent was unmistakable: freshly split, perfectly ripe passion fruit.

The garden belongs to Kangaroo Island Spirits. Sara Lark, one of the distillery’s co-owners, also held the clipping to her nose as we stood under the hot midday sun and I half-listened to her explain that the wild bush grows in sandy dunes while I was scanning the hardscrabble horizon for mobs of wallabies. “For those of us who live in Australia, this is the smell of going to the beach in the summer,” she said.

Olearia is just one of the fresh, native botanicals used by Kangaroo Island Spirits, a tiny distillery that is riding the massive craft spirits boom that’s sweeping the globe. The first boutique gin producer in Australia, Kangaroo Island Spirits uses indigenous juniper and boobialla berries, along with indigenous plants like aniseed myrtle, in its spirits. The distillery’s gins are now being sold at fancy cocktail bars and restaurants in Sydney and Melbourne—and they’re not the only ones. All across the country, native plants are being used in a unique and growing range of boutique farm-to-table spirits, but mostly gins.

A collaboration between Adelaide Hills Distillery and the Indigenous-owned food supplier Something Wild, Australian Green Ant Gin incorporates the surprisingly citrusy notes of the ants, balanced with native juniper and other botanicals, including strawberry gum. Joadja Distillery, near Sydney, is making a Crossbones Freebooter Cane Spirit with a mix of 100 percent native botanicals.

In the Yarra Valley, Four Pillars Gin is adding the leaf of the Tasmanian pepperberry to its blends. Cameron MacKenzie, the cofounder and distiller at Four Pillars Gin, describes the pepperberry as a particularly powerful botanical. “It has an aromatic similar to dried herbs—think pesto—as well as green tea and white pepper,” he said. “In our gin, we found that it adds lovely warmth to the spirit without being hot. The flavors are savory and textural and integrate beautifully with our citrus notes.”

Australia’s boutique spirit makers are embracing farm-to-table consumerism and developing a growing interest in unique spirits, but they’re also cultivating a broad Australian sense of terroir. As Australians grapple with building some sort of definitive, unified cuisine (beyond meat pies and kangaroo burgers), a sort of consensus has emerged that the answer is less in technique and national traditions and more in the sea and soil—those factors that are largely native to the land.

There’s also something immensely special about a boutique spirit that reflects a local environment that is rich in native foods that are still unfamiliar to many people around the world. One night in Adelaide, I settled into my chair at Orana and awaited a spectacle. Jock Zonfrillo’s award-winning restaurant is renowned for both his superb food and an educational mandate regarding indigenous ingredients and the culinary practices of indigenous Australians. Just before the soft damper bread with rich macadamia butter arrived, I was offered an Applewood gin and tonic infused with lemon myrtle and slices of small, tart finger limes—which are exactly what they sound like.

Jon Lark, the co-owner and director of Kangaroo Island Spirits, described this as a now-quintessential Australian experience. “If you’ve been to Australia, you will likely have experienced a gin and tonic garnished with small, pink ‘caviar-like pearls’ of lime that burst in your mouth,” he said. “These sorts of experiences and a careful use of botanicals in spirits and garnishes mean that matching spirits with local ingredients is an essential element in the Australian food genre. We can create Australian indigenous spirits that reflect the landscapes we live in.”