When her eldest son was in elementary school in the Oakland Unified School District, Ruth Woodruff became alarmed by the meals he was being served at school. A lot of it was frozen, processed foods, packed with preservatives. At home, she was feeding her children locally sourced, organic foods.

Woodruff believes that feeding children well is a foundation of good education. “If kids come to school hungry, if they don’t have access to adequate nutrition … their brains aren’t going to be performing as well,” she said.

So in late 2008, she and a group of parents got together to urge the school district to reconsider how and where it was buying the food it served students.

Now, five years after the district responded by overhauling the menus at its 100-plus schools—serving less meat and adding more fruits and vegetables—a new report has revealed some surprising results. The study by the environmental nonprofit, Friends of the Earth, found that the district’s Farm to School initiative not only provided its 48,000 or so students with access to healthier foods, but that between 2012 and 2015 its overall food costs declined and its carbon footprint shrank. 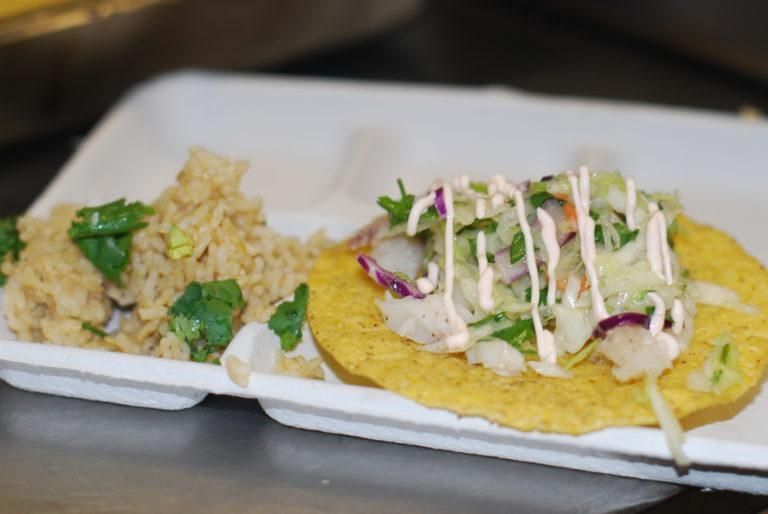 What’s more, kids are loving their new lunch choices. Oakland Unified School District is drawing praise from environmental organizations, and other districts are seeing it as an example for how they can serve more organic meals, made from scratch. “Food is often completely ignored as a climate solution,” said Kari Hamerschlag, lead author of the report and Friends of the Earth’s food and technology deputy director. “But there really is a climate solution at the end of everyone’s fork.”

Healthy food access is especially significant in Oakland, where a majority of the students are low-income, said the district’s Farm to School supervisor, Alexandra Emmott. Some 73 percent of the district’s students qualify for free and reduced lunches.

“Many of our students are eating multiple meals a day at the school district, so it’s really important that those are healthy and that they’re sustainable,” Emmott said.

In pushing for change, Woodruff and the other parents formed the Oakland School Food Alliance, which studied school-lunch models across the country and encouraged the district to consider more locally sourced, whole foods.

For the cash-strapped district, fresh fruits and vegetables and organic meats would be expensive. So in the fall of 2009, it launched Farm to School to bring foods from local farms into its cafeterias. The program saves the district money because cooks prepare school meals from scratch.

To cut down on the use as well as the cost of meat, they began serving a vegetarian menu once a week. On other days, they reduce meat usage by 30 percent, while also serving more fruits and vegetables. To meet the protein requirements in the U.S. Department of Agriculture’s nutrition standards for school meals, they pair higher quality meats with a 10 percent increase in legumes.

The lunch menu in Oakland Unified School District schools transformed from a smorgasbord of processed foods to local, organic options. School cooks season and roast antibiotic-free chicken in-house, instead of heating up pre-cooked drumsticks. They also substitute frozen vegetables with fresh sides, like carrot salads made from scratch.

In addition to a healthier menu, students get to go on field trips to local farms and take cooking classes through the program. A grant from the California Department of Food and Agriculture has allowed the district to continue it.

In 2013, Oakland Unified School District partnered with the sustainable living nonprofit, Center for Ecoliteracy, to pilot a supplemental program called California Thursdays, which allows them to serve even more freshly prepared, locally grown food once a week. It has since been expanded into 58 school districts statewide.

One byproduct of the district’s menu overhaul has had environmental benefits officials hadn’t anticipated.

School Food FOCUS, a nonprofit that works with companies and schools to bring healthier foods to cafeterias, connected the district with Mindful Meats, a supplier of California-grown organic beef. The company’s meats come from grass-fed matured dairy cows that serve the dual purpose of creating milk and beef and therefore have a smaller carbon footprint.

Animal agriculture is one of the leading drivers of greenhouse gas emissions, according to the U.S. Environmental Protection Agency. And because schools typically purchase large amounts of animal products, they have larger carbon footprints, Hamerschlag said. By choosing organic meat options, the environmental benefits were immediate.

The Friends of the Earth report found that over a two-year period, Oakland Unified School District reduced its carbon footprint by 14 percent, its water use by nearly 6 percent and saved the district $42,000, or about 1 percent of its food budget, Emmott said.

The district plans to expand the program. In coming years, it will complete a 48,000-square-foot central kitchen, an instructional farm and education center where students can learn about urban agriculture.

And Woodruff, the Oakland Unified School District parent, hopes that the new kitchen will allow students to eat even more whole foods cooked from scratch.