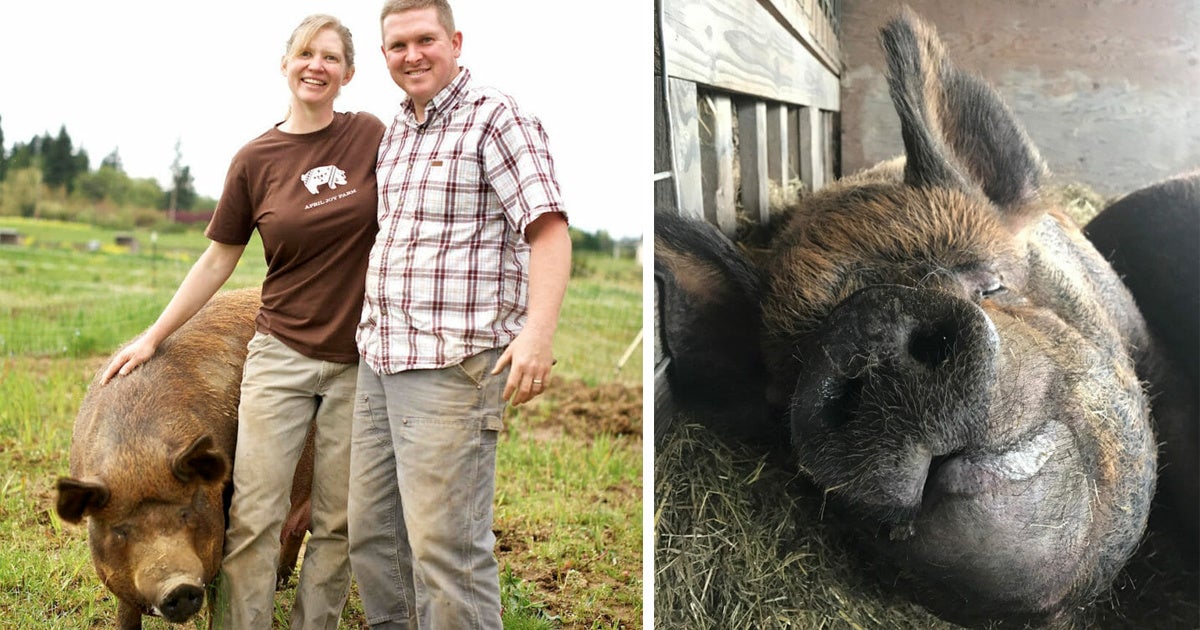 April Joy Farm is also the first Clark County farm to be approved by the Washington State Department of Labor & Industries to offer an apprenticeship program to train aspiring farmers.

The aptly named, 24-acre April Joy Farm, near Ridgefield, Washington, has its bases covered when it comes to bringing joy to the art of farming. Farmers April and Brad Thatcher’s motto is “Good food grown with love.”

April grew up in Ridgefield, near Annie and Pete Peterson, the owners of what would later become April Joy Farm. In fact, April spent many happy childhood days helping with chores there, and she fell in love with their land. Even though April earned her college degree in engineering and worked for several years in that field, she never imagined that she would become a farmer. But in 2003, the Peterson farm became available and, with her parents’ help, April was able to purchase the farm and become its steward. 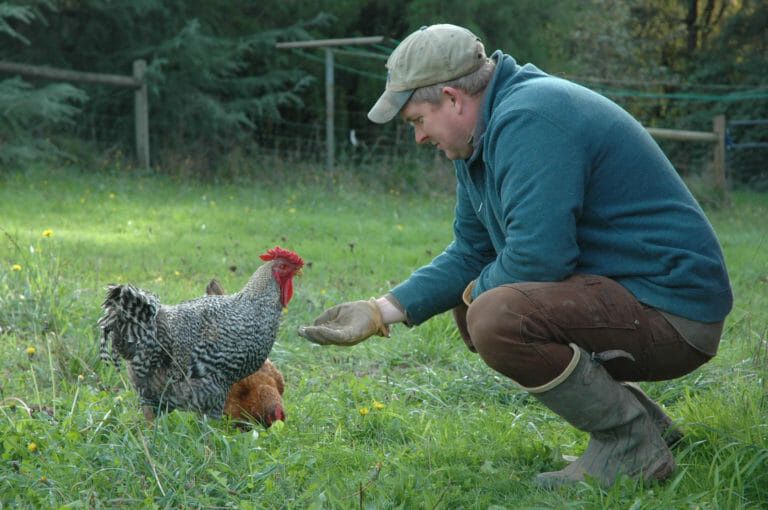 Brad with the “kindly king of the barnyard”, Dashing the rooster. April Joy Farm

When April started, established markets for producers were lacking, so she connected with chefs, grocers and families. She designed and built infrastructure. There were two existing barns, but no fencing, irrigation, packing shed, greenhouses or appropriately sized machinery and equipment. “I had to develop a viable business model from scratch and convince my community that farming is a professional career,” she said. April produced her first crops in 2008.

April met Brad in 2011, they were married in 2012, and he joined her in the farming venture. “I’m the nuts-and-bolts project manager who can pull many ideas together to create a process or strategy,” she said. “Brad takes those raw systems and applies controls and refinements to make things flow. His expertise has significantly improved the profitability of the farm.”

The produce at April Joy Farm is 100 percent certified organic by the Washington State Department of Agriculture. The farm runs a community-supported agriculture program for about 60 families, and members sometimes donate their shares to needy families. Additionally, the farm partners with its school family resources center to distribute produce when there are abundant harvests.

April and Brad also take humane farming to a whole new level, claiming to have a deep and reverential partnership with their livestock. April Joy Farm is the first farm in the Pacific Northwest to become Animal Welfare Approved (AWA), and their farm animals have names and specific roles on the farm. For instance, their pig, Rosie, is considered the matriarch on the farm. She has been the consummate mother to many piglets over the years.

April Joy Farm is the first Clark County farm to be approved by the Washington State Department of Labor & Industries to offer an apprenticeship program to train aspiring farmers. Its first intern will launch her farm business next spring, and a second intern is working on a business plan. “It’s a joy to see these ‘seeds’ germinating,” said April.

April Joy Farm boasts a long list of community partnerships and continually seeks grants to help improve the health and sustainability of the farm. The farm was awarded a National Resources Conservation Service (NRCS) Salmon-Safe grant to install a four-bay Aerated Static Pile composting facility that uses forced air to control the heat of the compost piles to process organic materials more efficiently. A solar array installed with a Rural Energy for America Program grant produces 50 to 60 percent of energy needs on the farm. The farm has done numerous cost-sharing projects with the NRCS’s Environmental Quality Incentives Program (EQIP), planting native plant buffers of bird-sheltering trees and water-filtering shrubs. You can hear the passion in April’s voice when she speaks about projects that improve and protect the soil—”the most vital component of farming,” she said—as well as those that provide diverse pollinator habitats dispersed among their crops, advocate for animal welfare, and educate others on the perils of concentrated animal feeding operations (CAFOs). The farm is also planting orchards adjacent to their pigs’ pastures so that they can forage through the pastures.

April and Brad Thatcher are committed to the ecological health of their soil, animals and community. With their unique model, they hope to spread the joy of the art of farming.