Family Poisoned on Spring Break, Turns Vacation Into a Nightmare 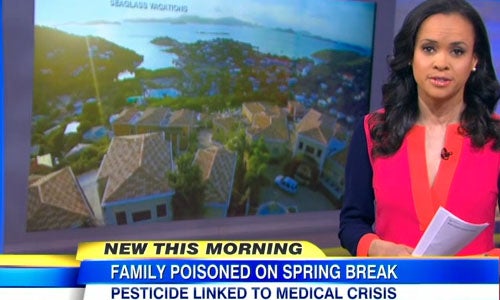 A Delaware family of four appears to have been poisoned by a toxic pesticide used as a fumigant to control a pest problem at a luxury resort in the U.S. Virgin Islands.

“The day the family arrived at their second floor condo, the apartment below them was sprayed with methyl bromide to ‘deal with an indoor bug,'” Judith Enck, administrator for the Environmental Protection Agency’s (EPA) Region 2 Office, which covers the U.S. Virgin Islands, told ABC News.

Methyl bromide exposure can have severe short term and long term effects, Enck said. The U.S. EPA banned the pesticide for indoor residential use in 1984, but the product is still allowed for certain agricultural uses.

The father, Steve Esmond, and his two sons (Sean, 16, and Ryan, 14) were in very critical condition as of last night. Steve remains unable to walk or talk two weeks after the incident and the sons are in a coma, according to the Daily Mail. The mother, Theresa Devine, was released from the hospital and is undergoing occupational therapy.

The U.S. EPA has launched an investigation and is looking into whether other locations in the U.S. Virgin Islands have used methyl bromide. The Department of Justice is also investigating Terminix, the company that applied the pesticide.

Will Arsenic Finally be Removed From Poultry Production?