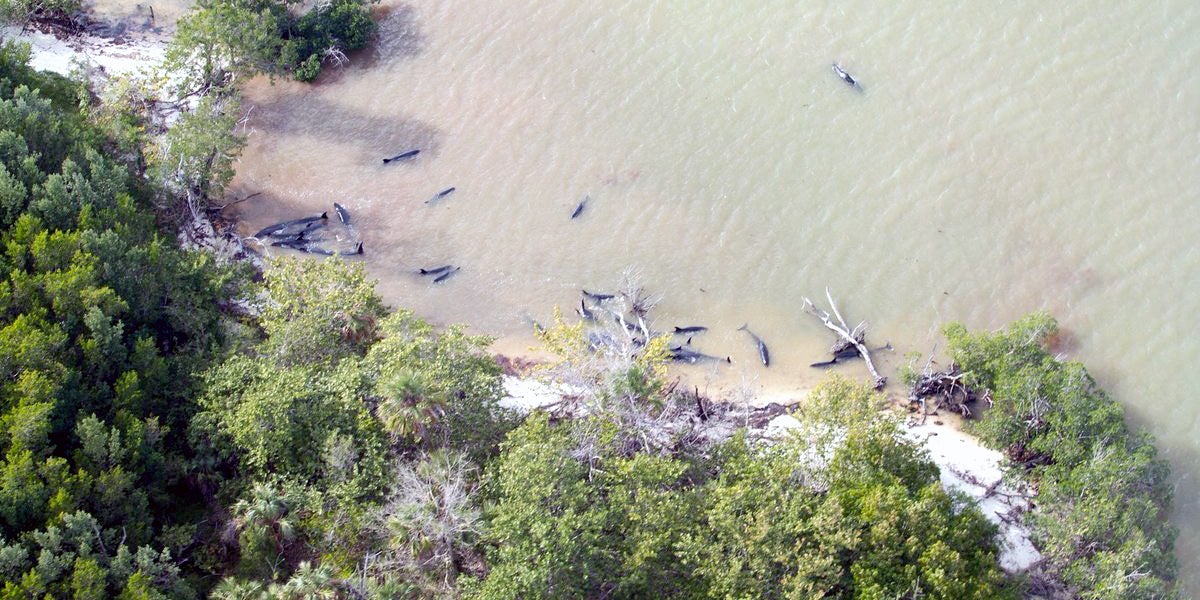 Ninety-five false killer whales were stranded off the coast of Hog Key in Florida’s Everglades National Park over the weekend.

The National Oceanic and Atmospheric Administration (NOAA) wrote in a Facebook post this morning that 82 animals are now confirmed dead and 13 are unaccounted for. Earlier reports put the death toll at 81.

Officials told the Miami Herald that this is the largest recorded stranding of such species in Florida.

False killer whales belong to the dolphin family and get their name due to their resemblance to orcas. Females reach lengths of 15 feet and males are almost 20 feet. Adult false killer whales can weigh approximately 1,500 pounds.

The U.S Coast Guard first spotted the stranding on Saturday near Hog Key, which is located in a dense network of islands off south west Florida.

According to the Palm Beach Post, a rescue team reached the false killer whales—which included adults, juveniles and calves—by Sunday but could not save the vast majority of them.

“Once on the scene, the response team attempted to herd the whales into deeper water, however, they were ultimately unsuccessful in that effort,” NOAA’s mammal stranding network Blair Mase explained to the publication.

Mase said that the false killer whales were beached and scattered along the shoreline in poor condition and “deeply embedded in the mangroves,” making the effort to rescue them nearly impossible. Rescuers had to humanely euthanize nine of the animals. Seventy-two of the dolphins died on their own on Sunday.

NOAA said that response teams are now working to assess the scene, but its remote location makes it challenging to gain access. The National Park Service is conducting aerial flyovers to help make it easier for the response teams to enter the area by boat.

It is currently unclear why the massive stranding occurred. In the coming months, biologists will conduct necropsies to determine what exactly happened, NOAA said.

Local marine biologist Stefanie Wolf told FOX 4 Now that one theory behind the stranding could be due to the pod getting lost and entangled in the area’s thick maze of mangroves.

“Down in that area of Everglades National Park it’s very shallow—very easily for even a human to get lost navigating through those waters,” Wolf said, adding that the pod might not have been able to use their echolocation to find their way around.

As the FOX 4 reporter noted, while strandings are rare, when they do happen they usually happen in large groups because the dolphins are social animals.