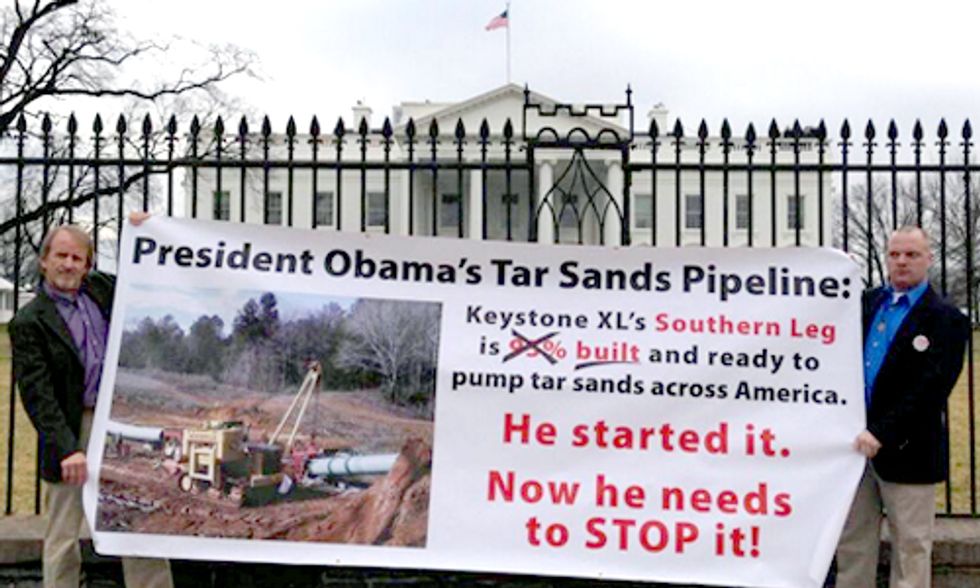 Today, citizens marked the eighty-fifth birthday of Martin Luther King, Jr. by risking arrest to stop the scheduled Jan. 22 start-up of TransCanada's Keystone XL tar sands pipeline in Texas and Oklahoma. They are calling on President Obama to exercise his executive powers to permanently shut the pipeline down, starting with ordering the Pipeline Hazardous Materials and Safety Administration to re-inspect the pipeline's anomaly-plagued 485-mile southern leg.

The 485-mile southern leg of TransCanada's Cushing, OK to Port Arthur, TX Keystone XL tar sands pipeline has been completed, is being filled and is scheduled to start up on Jan. 22

"That pipe is in there illegally," said Texas landowner Michael Bishop, who has sued the US Army Corps for granting TransCanada permits to build Keystone XL on his land without public hearings or water impact studies, as required by law. "If a burglar is in your home, they can't argue they have a right to be there. Yet President Obama approved and promoted this Keystone XL pipeline that has destroyed my property and the future of my children and grandchildren."

"I ask President Obama to immediately shut this pipeline down," said Texas farmer Julia Trigg Crawford, who has mounted a legal challenge against TransCanada's abuse of eminent domain that is being considered by the Texas Supreme Court. "He can start by ordering that every mile of this anomaly-plagued pipeline be retested and dug up if necessary. The risks are too great to allow Keystone XL to threaten our homes with toxic tar sands."

"President Obama knows we just passed the grim milestone of 400 parts per million of carbon dioxide in the atmosphere, yet he approved this tar sands pipeline that would make the climate crisis worse," said Tom Weis, president of Climate Crisis Solutions. "This isn't climate leadership, this is madness." Weis was in the first wave of 1,253 activists arrested outside the White House during a 2011 protest against Keystone XL, spending two nights in a DC cellblock with Bill McKibben and 63 others.

"Caring for God's creation means having the moral conviction to defend the Earth and future generations when they are threatened," said Patrick Carolan, executive director of the Franciscan Action Network. "Today we ask President Obama to show moral courage and live the faith he often talks about by using his executive powers to stop the Keystone XL tar sands pipeline in Texas and Oklahoma."

"The president has a clear moral obligation to stop Keystone XL's southern leg," said Ted Glick of Interfaith Moral Action on Climate. "Only days remain for him to extinguish this 485-mile fuse to one of the biggest carbon bombs on Earth."

The 485-mile southern leg of TransCanada's Cushing, OK to Port Arthur, TX Keystone XL tar sands pipeline has been completed, is being filled and is scheduled to start up on Jan. 22. Landowners in Texas and Oklahoma have reported TransCanada patrol planes flying up and down the line in Texas and Oklahoma, with foot patrols searching for leaks.

This emergency direct action is part of IMAC's second annual Pray-In for the Climate and is endorsed by Texas landowners Julia Trigg Crawford, Michael Bishop and Eleanor Fairchild, along with Bill McKibben, Ed Begley, Jr. and others.