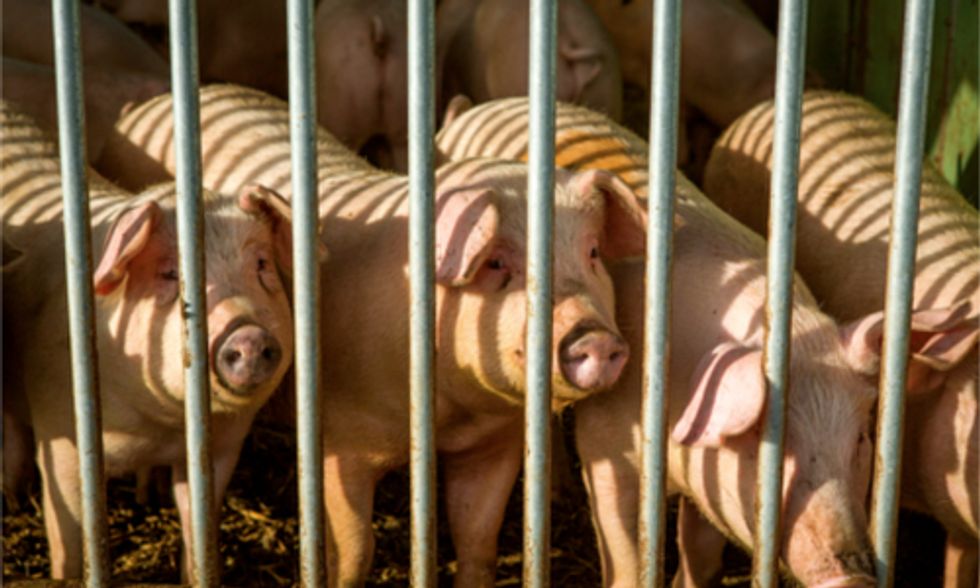 OnEarth published an investigative cover story on Monday regarding Iowa’s staggering rise of hog production over the last decade and its impact on local drinking water and surrounding communities.

Hog manure goes virtually untreated before being spread onto millions of acres of cropland as fertilizer, where it then washes into nearby waterways. Photo credit: Johan Pabon/Flickr

The piece, Hog Wild: How Factory Farms Are Poisoning Iowa’s Water, explores the lapses in environmental oversight and regulation and the potentially fatal effects of Iowa's 8,500 factory farms that produce unparalleled volumes of fecal waste. It also investigates Iowa factory farms' push to significantly bolster its Spam sales in Chinese and other Asian markets.

Ted Genoways, OnEarth's editor-at-large, went on site to some of Iowa's largest hog confinement facilities and reported on how manure goes virtually untreated before being spread onto millions of acres of cropland as fertilizer, where it then washes into nearby waterways.

To tell the story, Genoways gained unprecedented access to Hormel Meats, a hog finishing facility on Iowa’s Des Moines River watershed, as well as an Iowa Department of Natural Resources (DNR) inspection of the facility, allowing him to weave together big agriculture, science and politics and uncover the struggles of tackling industrial farm manure pollution.

"Between May and July 2013, as downpours sheeted off drought-hardened fields, scientists at the Des Moines Water Works [DMWW] watched manure contamination spike to staggering levels at intake sites on the Raccoon and Des Moines rivers. These two major tributaries of the Mississippi are also the usual sources of drinking water for roughly one out of every six Iowans. But at one point last summer, nitrate in the Raccoon [River] reached 240 percent of the level allowed under the Clean Water Act, and the DMWW warned parents not to let children drink from the tap, reminding them of the risk of blue baby syndrome. (Nitrate impairs the oxygen capacity of the bloodstream; in babies and toddlers the syndrome can effectively cut off their air supply, rendering them a deathly blue.)"

He adds the number of Iowa DNR staffers conducting inspections has been cut by 60 percent since 2007.

Even though Iowa is the country's leading hog producer, the problem isn't just limited to the rural Midwestern state. There’s very little industry-wide information available about how factory farms handle their waste or even where they are located, said Wei.

The NRDC has been taking legal action to hold the U.S. Environmental Protection Agency accountable for protecting America's waterways by pushing for more factory farm transparency and oversight and by fighting industry pollution loopholes.

The NRDC has also been encouraging sustainable farming practices that don’t rely on the abuse of drugs by urging Food and Drug Administration officials to follow two federal court orders that mandate the agency act to limit antibiotics overuse farms.