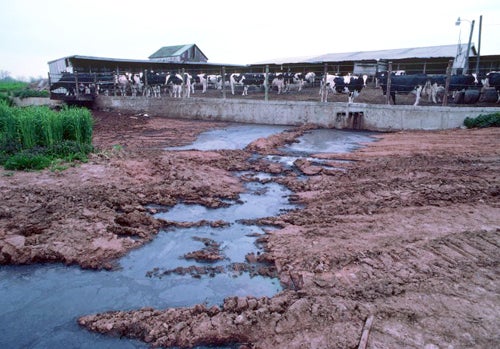 From the backyard grill to the picnic basket, Americans seem to have a love affair with meat and poultry. To supply that demand, livestock production has turned to concentrated animal feeding operations (CAFOs) as the new business model, growing high volumes of cows, pigs and birds within short time spans and in the smallest spaces possible.

These “factory farms” are designed to be efficient at producing meat, but they also generate enormous amounts of manure. Livestock animals create 13 to 25 times more of it than humans, on a per-weight basis, resulting in quantities from a single large CAFO that can surpass the sanitary waste production of a city as large as Philadelphia. Treatment is not required for animal manure as it is for human sewage, so where does all of that waste go?

A growing body of evidence indicates that CAFO-generated contaminants are ending up in the waters that we depend on for commerce, recreation and perhaps most importantly, drinking. Spills that occur during manure transport or when storage facilities fail can lead to easily discernible, significant impacts on water quality, as I explained in my previous blog entry.

More insidious though are the negative impacts resulting from the over-application of animal solid waste to crops. Spreading livestock manure in quantities greater than the plants can use or the soil can absorb can cause severe water quality problems and thereby harm human health. Although waste generated by the animal farm operator can be a valuable commodity when applied on land to help crops grow, the sheer scale of CAFOs distorts such usage.

Because CAFOs are often clustered within small areas and many farmers purchase livestock feed instead of growing it on adjacent land, the area available for manure disposal is rapidly vanishing. The U.S. Department of Agriculture brought this trend to light in 2000 when it found that the potential for water pollution from manure runoff was higher in those regions with the largest concentration of animals in confinement. More recent studies also point to CAFO density as a chief indicator of localized runoff and higher contaminant concentrations in water.

States must document the waters that have become degraded in order to comply with the federal Clean Water Act. These lists of impaired lakes, rivers, streams and aquifers illustrate that the manure generated from CAFOs is a significant contributor to decreased water quality in the nation’s watersheds—whether the source is production and waste management sites or manure-treated cropland. Unfortunately, that inventory does not fully capture the likely impacts of discharges from CAFOs because only 27.5 percent of rivers and streams and 45.5 percent of lakes nationally have been assessed.

We must recognize that CAFOs are among the substantial producers of pollutants to the waters we depend on. In my next blog entry, I’ll focus on the role that animal agriculture plays in one particularly troubled watershed: the Chesapeake Bay.