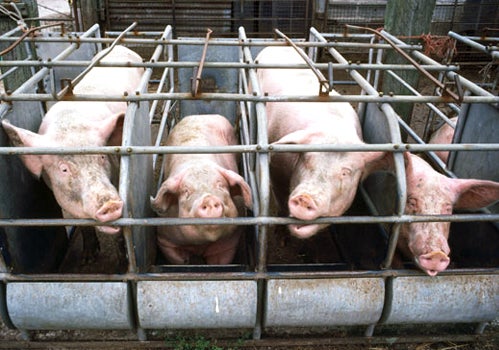 Before the 1960s, America’s supply of chicken, beef, pork and eggs was produced by a multitude of farms across the country. The vast majority of these operations were, by today’s standards, smaller and housed fewer animals. As one would expect, volume of manure generated by these farms was relatively small and was used to fertilize nearby crops.

But over time, farming has become more centralized, and scaled-up operations are so large that they could scarcely be termed “farms” any longer. These concentrated animal feeding operations (CAFOs) condensed the raising of animals to particular regions, many with insufficient nearby cropland to effectively use the manure all those chickens, hogs and other animals create.

The U.S. Environmental Protection Agency estimates that more than 1 billion tons of animal waste is produced annually by livestock operations, much of it from CAFOs. These facilities commonly rely on open lagoons or large piles to store the huge volumes of waste generated there, later to be crop-applied. This waste is essentially untreated and often used at levels that far exceed the fertilization needs of crops. This results in excess runoff and leaching into local rivers, streams and bays, damaging water quality and fish, birds and other life.

And there have been plenty of reports of these issues affecting people, too. In 2004, 29 states identified livestock-feeding operations as a source of water pollution. According to the U.S. EPA, drinking water sources for an estimated 40 percent of Americans have suffered some level of pathogen contamination associated with CAFOs.

The waste generated by CAFOs contains a range of pollutants, including excess nutrients such as nitrogen and phosphorus. Even more alarming, this manure can carry pathogens like bacteria and viruses, antibiotics, copper and arsenic.

All this can result in a multitude of problems for people, plants and animals alike. For example:

• At a national wildlife refuge near a large hog operation in Nebraska, wildlife experts concluded in 2004 that wastewater with high concentrations of phosphorus, ammonia, nitrogen, and harmful pathogens had created an environment conducive to algal blooms and possible outbreaks of avian botulism and avian cholera.

• Over the last three years, toxic algal blooms have plagued Grand Lake St. Marys in western Ohio. These are caused by excess nutrients, and the Ohio Department of Natural Resources notes that the “manure generated by approximately 300 confined animal operations and applied to nearby crop fields is a major component of the nutrient load to the watershed.”

The Clean Water Act is the principal law for controlling pollution of rivers, lakes and wetlands in the U.S. The law has a mixed record overall, but an especially poor one when it comes to regulating pollution from animal agriculture, particularly concentrated animal feeding operations. While the U.S. EPA and state agencies have implemented various regulations to control nutrient pollution, significant gaps remain.

For more information and to take action, click here.