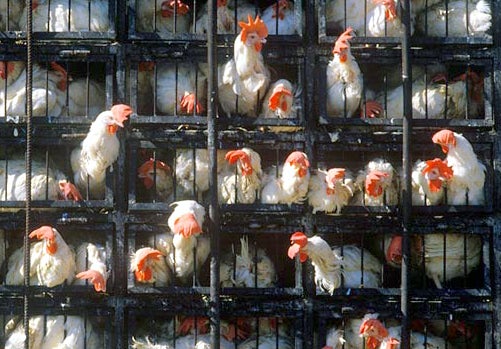 During the last 50 years, animal agriculture has gone through a seismic shift in the U.S. Long gone are the iconic scenes of American landscapes dotted with family farms and red barns. Most of these have been replaced by industrialized facilities controlled by large corporations that rely on concentrated animal feeding operations (CAFOs). In this system, cavernous warehouses crowded with thousands—even tens of thousands—of animals form the equivalent of an agricultural assembly line. And independent farmers, once the cornerstone of rural America, struggle to compete in a marketplace dominated by a few big corporations.

As large corporations (known as integrators) have applied an industrial model to farming, they have also generated a host of new problems.

The CAFO model relies on three interlinked practices in order to increase profits:

• Maximize the number of animals squeezed into the least amount of space and require the fewest number of employees to provide care.

• Administer continual doses of antibiotics to the animals to prevent the diseases prevalent in their close-quarters housing.

• Minimize the disposal cost for the substantial volume of animal waste produced by the facilities.

These practices may turn a profit for the big corporations, but they are disastrous for human health and the environment. Up to 1 billion tons of manure is generated by livestock operations every year, much of it from CAFOs. In some cases, the waste is stored in large lagoons or open piles that can leak or spill into adjacent land and water. In other cases, manure is liberally spread on fields in such overwhelming concentrations that soil and crops often cannot impede all of the nitrogen, phosphorus and pathogens from reaching public waterways.

The mishandling of manure has resulted in contaminated drinking water sources for 40 percent of the U.S. population in recent years, according to Environmental Protection Agency estimates. Tainted drinking water, destruction of fish and other aquatic life, and polluted recreation areas, however, are just part of the damage caused by CAFOs.

Countless independent farmers have been pushed out of business. Millions of animals have been confined to crates or cages and subjected to inhumane practices. The human health threat of antibiotic-resistant infections continues to rise. And the corporate integrators have largely been insulated from regulation, transparency, and requirements many other industries must follow with regard to pollution.

Shortly after the Pew Commission on Industrial Farm Animal Production released a groundbreaking report on this topic in 2008, the Pew Environment Group launched a campaign aimed at reforming this sector of agriculture. Pew is working to address these challenges by securing effective, sensible government oversight to protect water resources and human health, urging the industry to change its practices and building public awareness of the problems.

During the next several months, I will use this series to describe the environmental concerns associated with CAFOs, the impact on independent farmers, the industry’s resistance to change and how this issue affects our quality of life in the U.S.