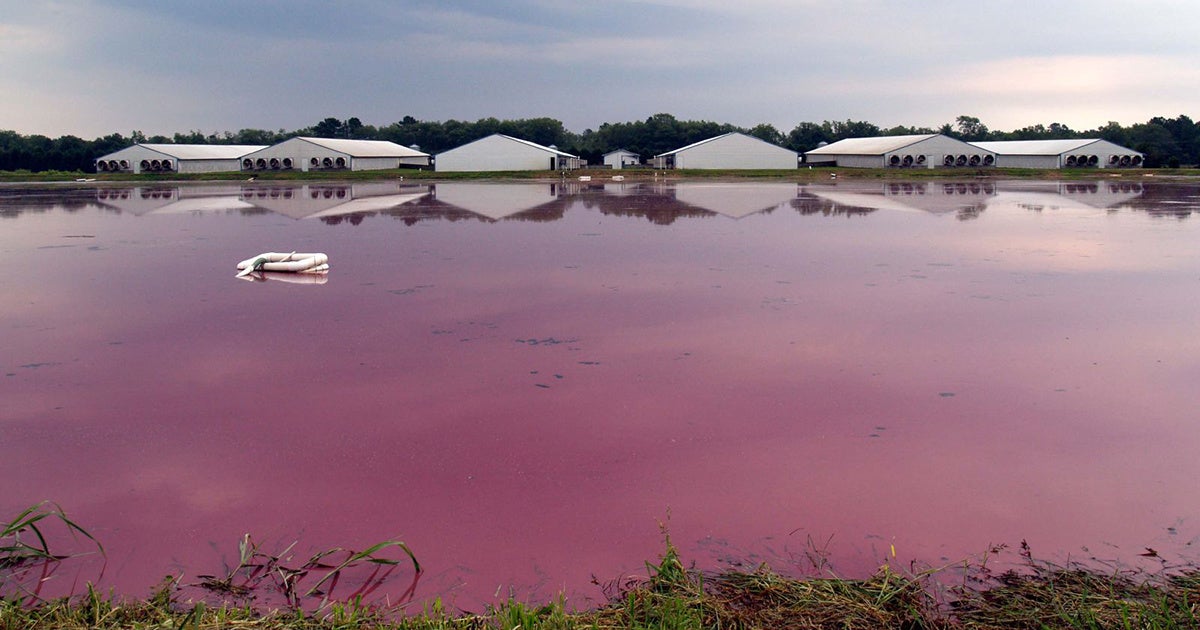 It has been almost a year since Hurricane Florence slammed the Carolinas, dumping a record 30 inches of rainfall in some parts of the states. At least 52 people died, and property and economic losses reached $24 billion, with nearly $17 billion in North Carolina alone. Flood waters also killed an estimated 3.5 million chickens and 5,500 hogs.

A lesser-known impact of the devastating hurricane was revealed through satellite photos released after the storm. Excessive rainfall flooded concentrated animal feeding operations (CAFOs) in low-lying areas, carrying riverbed sediment and animal waste previously stored in open-air lagoons into nearby waterways and then into the Atlantic. The difference between the photos, taken just five months apart before and after the storm, is striking.

Here are before-and-after photos of the coastline near Marine Corps Base Camp Lejeune on April 12, 2018, and then on Sept. 19, 2018, after Hurricane Florence dumped near-record amounts of rainfall. 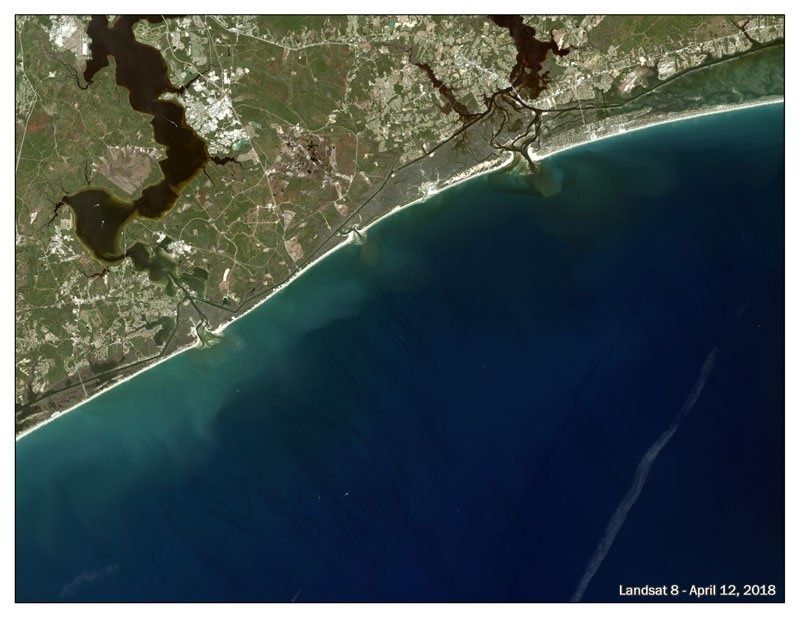 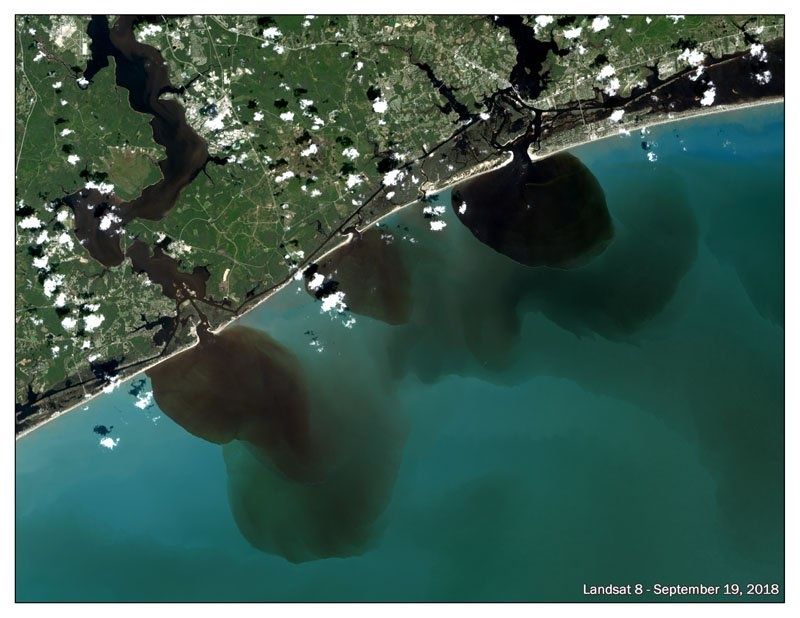 Sept. 19, 2018: The dark brown liquid spilling into the Atlantic captured in this image is a mix of rainwater, riverbed sediment and waste from those factory farms within the 100-year flood plain that were inundated with more than 20 inches of rain in the matter of a couple of days.
Landsat 8 / NASA

Generally, CAFOs dispose of animal waste by spraying it as fertilizer and storing the excess in massive underground pits or open-air lagoons, where sulfur-eating bacteria often turn the mixture bright pink. Given that cropland can absorb only so much, a good deal of the waste ends up in groundwater, rivers, streams and the ocean. In fact, agriculture is the leading cause of pollution in the nation’s rivers and lakes, according to the U.S. Environmental Protection Agency (EPA), much of it emanating from large-scale factory farms.

Floods can have even more devastating consequences for water quality. The risk is particularly pressing for North Carolina, a state regularly smacked by hurricanes, because it houses more than 2,200 hog CAFOs and 3,900 poultry CAFOs, and produces up to 10 billion gallons of animal waste a year. These estimates come from the Environmental Working Group (EWG).

One problem is that they are just that — estimates.

The truth is no one really knows how much factory farm waste is escaping into our environment because no federal agency collects consistent and reliable information on the number, size and location of large-scale agricultural operations, nor the pollution they’re emitting. This means there is considerable variation on how thoroughly states track and monitor CAFOs. Without this information, no one can monitor and hold CAFOS accountable for mismanaged waste and related health and environmental damage.

Stanford Law Prof. Daniel Ho and Ph.D. student Cassandra Handan-Nader are hoping to change that. In a paper published in Nature Sustainability in April, they show how a new algorithm can help put CAFOs on the map. Their research focused on hog and poultry operations. The latter can contribute as much nutrient runoff to watersheds as pig operations but are largely unpermitted in North Carolina and therefore much harder to detect.

The Clean Water Act requires permits for CAFOs that discharge pollutants directly into federally regulated waters. However, permits are not required for facilities that may discharge pollutants, say, if there was a break in the manure storage tank or a hurricane. An estimated 60 percent of CAFOs do not hold permits, reported the EPA in 2011, and so monitoring these facilities for unintentional pollution is nearly impossible.

Due to the lack of information about CAFOs and the failure of the government to provide oversight, several environmental and public interest groups have conducted their own studies of the issue. Several of these organizations have hired contractors to manually scan satellite images or physically identify facilities by plane or car. But this process is time- and resource-intensive. For North Carolina alone, contractors need about six weeks to manually scan satellite images on Google Maps, according to the EWG.

Ho and Handan-Nader’s automated approach could accomplish the same task in less than two days.

The development is a welcome one in an industry notoriously lacking in transparency. Around 25 states have pushed for “ag-gag” laws, which criminalize undercover filming or photography at factory farms without the consent of the owner. Nine states have passed these laws, and legislation is pending in two additional states, Kansas and North Carolina. In Idaho, Utah and Wyoming, ag-gag laws were later struck down in higher courts as a violation of free speech and equal protection.

Proponents of ag-gag laws argue that they protect the animal agriculture industry, and farm owners’ privacy. Critics say it gives factory farmers license to continue practices that are dirty, unsafe and cruel. “This project helps mitigate a dangerous dearth of information about CAFOs,” said Katie Cantrell, executive director of the Factory Farming Awareness Coalition. “Because CAFOs are exempt from reporting requirements under the Clean Air and Clean Water Acts, many communities across the United States are subjected to contaminated drinking water and dangerous levels of air pollutants, with little political recourse.”

​The Public Health Menace No One Knows About

The health and environmental impact of CAFOs is indeed enormous. “CAFOs are large-scale facilities that house thousands if not tens of thousands of animals in very small spaces,” said Ho. “One CAFO can produce as much manure as a medium-size city in the United States” — with one critical difference: A medium-size city in the U.S. is required under the Clean Water Act to have a municipal wastewater treatment plant. CAFOs have no such treatment plant.

When animal manure escapes from CAFOs into nearby water sources, it can have devastating health consequences for people and ecosystems. Manure can contain nitrogen and phosphorus, pathogens such as E. coli, growth hormones, antibiotics, chemicals used as additives to the manure or to clean equipment, animal blood and silage leachate from corn feed, reports the National Association of Local Boards of Health. Ammonia is also often found in surface waters surrounding CAFOs. When exposed to air, ammonium converts into nitrate, and elevated nitrate levels in drinking water have been connected to poor general health, birth defects and miscarriages. For infants, it can mean blue baby syndrome and even death.

The New York Times recently exposed the devastating effects of nitrate contamination from animal manure in low-income farmworker communities in California’s Central Valley. The widespread application of chemical fertilizers and dairy cow manure has made the water unsafe for drinking, cooking and even showering. Camille Pannu, the director of the Aoki Water Justice Clinic at the University of California, Davis, likens the situation to the water crisis in Flint, Michigan. “Flint is everywhere here.”

To put factory farms on the map, the Stanford team figured out how to teach a computer algorithm to analyze data patterns. They got help from Google’s advances in image learning, the USDA’s National Agricultural Imagery Program (NAIP), and the EWG and Waterkeeper Alliance.

The environmental groups supplied locations of CAFOs they had collected manually. The researchers matched those locations to NAIP satellite images, hand-validating the presence of CAFOs using these same processes. Once CAFOs were confirmed, the team combined this information with open-source image-recognition tools released by Google, which were already trained to identify different types of objects, buildings, people and animals in photos.

In receiving this information, the algorithm was retrained to identify CAFOs by looking for certain visual cues. “Swine farms were identifiable by compact rectangular barns abutted by large liquid manure pits, and poultry by long rectangular barns and dry manure storage,” noted the researchers in their report. The algorithm could then be applied to unscanned locations to identify unseen CAFOs.

Handan-Nader explained this process as the retraining of an existing technology. “Instead of working with a baby, we got a toddler, who knows what an arm is, but maybe doesn’t know what an entire person looks like,” said Handan-Nader. In this case, the arm is a building, and an entire person is a CAFO.

To improve the tool’s accuracy, the team also fed the algorithm photos of stadium bleachers, airplane hangars and mobile home parks, which only appear to match the CAFO visual cues. “Just as humans learn from being tricked, so does a computer,” said Handan-Nader.

There’s another way to look at the research effort, she added. They were “very unglamorously looking at poop for months and months.”

It paid off. Ho and Handan-Nader identified 15 percent more poultry farms than what was found through a manual census. The researchers estimated their algorithm could identify 95 percent of existing large-scale facilities using fewer than 10 percent of the resources required for a manual census.

“Dr. Ho’s work makes my job much easier,” said Soren Rundquist, the director of spatial analysis at the EWG. “While humans will always need to validate and quality check computer-generated results, any innovation for locating CAFOs will make the process much more efficient. This is paramount when keeping up with an industry that can grow quickly, having an immediate impact on the environment and public health.”

The tool works with conventional satellite imagery, but future iterations could be trained to identify new spectral signatures, like building materials, lagoons, or actual discharges into waterways. The tool could also help detect other forms of environmental degradation, like oil spills. Stephen Luby, a professor of medicine at Stanford University, is already using a similar technology to track brick kilns, a huge source of air pollution.

Katie Cantrell envisions using the tool to provide solid evidence of the harm done by factory farming. “This mapping project provides an invaluable resource for advocates at the local, state, and national level,” she said. “They can use it to document correlations between the location and density of CAFOs and socioeconomic data, health data such as asthma and mortality rates, and air and water pollution data, that can hopefully help drive better regulation and protection of front-line communities.” Added EWG’s Rundquist, “The need for this utility is becoming more important as public information around these operations becomes more opaque and unavailable.”

In the meantime, Missouri voted last month to prevent counties from passing more stringent laws regulating CAFOs. Now, local standards for health and environmental protection cannot be tougher than those of the state. In doing so, Missouri joins seven other states this year who have considered strengthening protections for CAFOs, which raises the question: Who is strengthening protections for our environment and local communities?

Tia Schwab is a news fellow for Stone Pier Press, a San Francisco-based environmental publishing company with a food focus. She recently graduated from Stanford University, where she studied human biology with a concentration in food systems and public health. She was born and raised in Austin, Texas, and she is passionate about using storytelling to create a healthy, just, and sustainable food system.

This article was produced as part of a partnership between Stone Pier Press and Earth | Food | Life, a project of the Independent Media Institute.