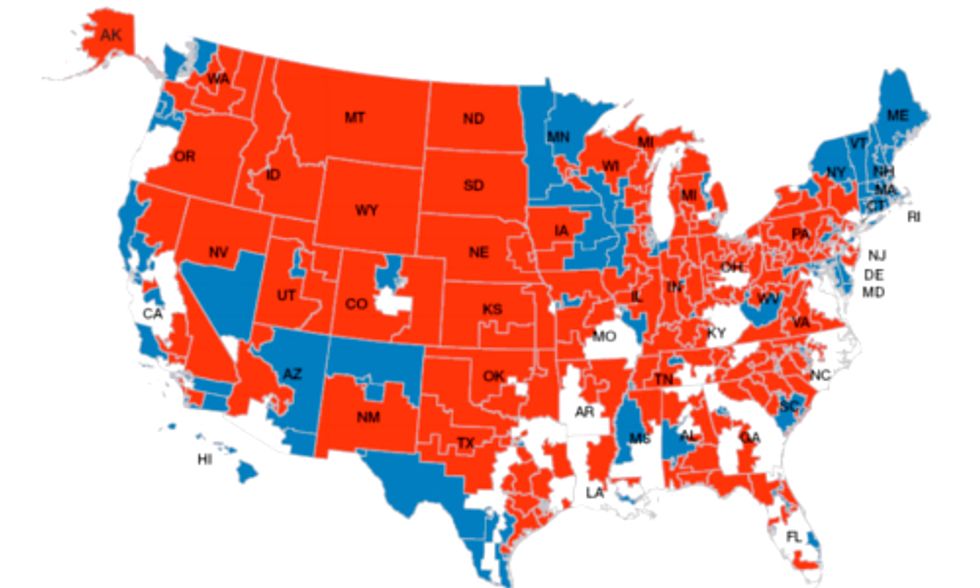 It was only a matter of time before wind energy supporters fired back at the fossil fuel-funded Institute for Energy Research (IER) for releasing a report this week that was peppered with falsehoods.

It didn’t help that its sister organization, the American Energy Alliance, equated the federal wind production tax credit (PTC) as “welfare” in its promotion of the IER study.

The American Wind Energy Association (AWEA)’s Elizabeth Salerno took a look at the study and found a few inaccuracies with IER’s claims. Comparing IER's addiction to "spreading misinformation" to a chain smoker,  here are four points about wind energy Salerno believes were left out of the "Estimating the State-Level Impact of Federal Wind Energy Subsidies" report:

It’s important to understand that there is no comprehensive energy policy in the U.S. The reality is that much of what the U.S. has relied on to spur domestic energy growth is a collection federal, state, and local public policy techniques, including the tax code.

A new report out earlier this year, “Energy tax policy: Issues in the 113th congress” by the Congressional Research Service (CRS) makes this point clear.

“Energy tax policy involves the use of one of the government’s main fiscal instruments, taxes (both as an incentive and as a disincentive) to alter the allocation or configuration of energy resources and their use," the report reads. "In theory, energy taxes and subsidies, like tax policy instruments in general, are intended either to correct a problem or distortion in the energy markets or to achieve some economic (efficiency, equity, or macroeconomic) objective.”

The truth is, tax incentives for the energy sector began in 1913, when intangible drilling costs were given to the oil industry and dozens have been added since then, most of which support fossil fuels.  In fact, the Nuclear Energy Institute’s own tally concludes that federal subsidies to fossil and nuclear energy sources totaled more than $650 billion from 1950 to 2010. Despite their remarkably long life spans, such incentives are mostly ignored in the current energy debate.

And while other industries continue to receive tax incentives carrying an expensive price tag, the PTC more than pays for itself in local, state, and federal taxes over the life of wind power projects, according to a NextEra Energy analysis.

All 50 states benefit from wind power equipped with the PTC

IER’s report strategically ignores the NextEra analysis demonstrating that the PTC more than pays for itself, in addition to the sizable economic benefits wind power has produced in all 50 states.

Wind power generated $25 billion in private investment, paying millions to landowners and local communities. Every state in the union, including 70 percent of all U.S. congressional districts, has an operating wind project, manufacturing plant or wind-related jobs.

Wind energy is one of the most broadly dispersed energy industries, with manufacturing currently in 44 states and turbines installed in 39 states plus Puerto Rico.

In fact, “Made in the USA” is now a label American wind power can proudly display on a majority (over 70 percent) of its parts and supplies.

Wind energy is reducing electricity prices across the country

More than a dozen studies by grid operators and state governments have confirmed that wind energy reduces electricity prices by displacing more expensive sources of energy. That includes a recent report by Synapse Energy Economics that found that doubling the use of wind energy in the Mid-Atlantic and Great Lake states would save consumers $6.9 billion per year on net, after accounting for both wind and transmission costs.

Because the electric power system is a highly integrated network, many of these electricity price reduction benefits accrue to states that have little to no wind energy. For example, the Synapse study found that the $6.9 billion in benefits of wind energy would be broadly spread across the 13 Mid-Atlantic and Great Lakes states, even to states without wind energy, as wind plants allow fossil-fired power plants in other states to reduce their output and fuel use.

Another goal of the PTC was to establish better U.S. energy security and address concerns about the environment. As the 2013 CRS report notes:

Adding wind power displaces the most expensive, least efficient power source on the utility system—usually an older fossil fuel plant. The total wind power installed today now allows us to avoid the equivalent of 100 million metric tons of CO2 annually—the equivalent of taking over 17 million cars off the road.

Wind power uses no water to generate electricity, while most other types of power plants use substantial quantities. Installing over 60 gigawatts of wind power has resulted in saving the equivalent of 37 billion gallons of water annually. That’s 130 gallons of water per person.

Wind energy does not emit particulate matter, which is associated with heart and lung disease, and it also does not emit mercury or other heavy metals, which collect in the food chain and are harmful to human and animal health.

In fact, according to a report completed for the New York State Energy Research and Development Authority (NYSERDA), wind power has the lowest impact on wildlife and the environment of any of several technologies studied – including coal, oil, natural gas, nuclear, and hydropower.

The bipartisan support that the PTC has historically received has been a reflection of Congress understanding that the majority of American people want more wind energy. With all these economic and environmental benefits, it’s easy to understand why that overwhelming support exists.

IER’s best (worst) efforts will not change these facts.