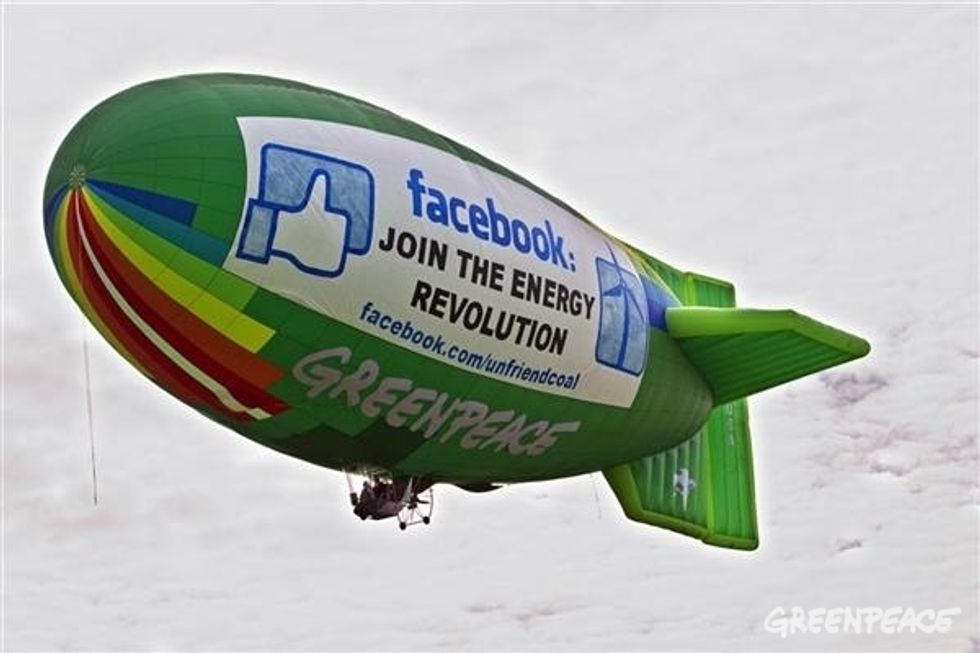 Today is a great day for the future of the IT sector.

Over the past few years, we’ve campaigned hard against Facebook to get them to commit to clean energy—specifically, we wanted them to change their siting policy—the decisions that they make about how to power their massive football-stadium-sized data centers.

When you go onto Facebook or Twitter or iTunes, your stuff—photos and music, status updates and party invitations—has to be stored somewhere. It’s not something we all spend a lot of time thinking about, but that’s how we use computers, and how we’re going to use them in the future. It’s called “the cloud." It’s growing fast—right now if the cloud were a country, it would be the fifth largest country in the world in terms of global warming emissions.

All that information is stored in massive data centers, which look like huge warehouses straight out of the Matrix. And more often than not, those data centers are powered by coal.

Like anyone else, I love Facebook. It’s changed the way we can talk to our supporters on the web—I can log in and see how people are engaging with our campaigns, what excites them and what motivates them, and what changes they want to see in the world.

We’ve won historic victories by relying on the power of Facebook—victories against major brands that happened virtually overnight. On our Facebook campaign, we set the Guinness Record for number of Facebook comments on a page in 24 hours. When I, or any of our activists, use Facebook, we want to know that we’re not contributing to the very problems that we’re fighting.

We’re asking them to be champions, and they’re stepping up and doing it.

Facebook has raised the bar for everyone, and we’re now looking for companies like Apple, Twitter and Microsoft to make their next move. What’s even more incredible is now that Facebook is demanding clean energy, utilities, like Duke Energy, are going to have to supply it.

This is the future of campaigning—big business isn’t going anywhere, so we want them on our side. We think corporations can be the good guys, if people demand it. We’ve asked them to step up and they’ve done it.

Since the beginning of our seafood supermarket campaign, along with other organizations, we’ve gotten 15 major supermarket chains around the country to improve their sustainable seafood policies. Just this year we’ve gotten two of the largest toy companies, Hasbro and Mattel, to stop sourcing their paper from Asia Pulp and Paper, a major contributor to Indonesian deforestation. And just this week, GE and Ben & Jerry’s were successful in pressuring the U.S. Environmental Protection Agency to make green refrigerants legal in the U.S., a step that will make a huge difference for the climate.

There’s so much more to come in 2012—we’re working to get the major tuna brands to use better fishing methods. We’ve got even more planned for the IT sector because we want to be able to use our gadgets, tweet and live our 21st century lives knowing that the cloud is cleaner.

And, as we say at Greenpeace all the time—no permanent allies, no permanent enemies. We’re committed to standing up for the truth and pushing corporations to be their absolute best—not just dollar-driven profiteers, but true members of our global community. Sometimes that means flying an airship over their headquarters (yup, we did that with Facebook too!) and sometimes it means standing together to ask for better solutions. So here’s to 21st century campaigning and unlikely allies. And thank you Facebook for helping us make history!

Read the agreement between Greenpeace and Facebook by clicking here.