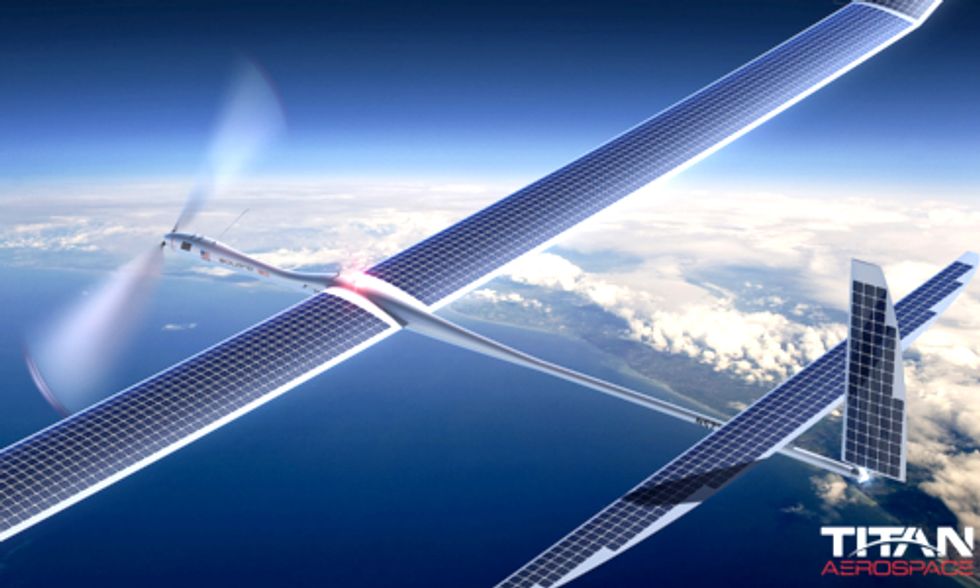 One of the week's hot rumors pairs one of the Web's largest companies with a solar-powered technology that could help people in remote areas connect to the Internet.

Facebook is in talks to buy Titan Aerospace, the company that created the world's first solar-powered drones. According to TechCrunch, Facebook's interest lies in its backing of the Internet.org initiative, which aims to connect 5 billion people in remote areas to the Internet.

Titan's Solara 60, an unmanned aerial vehicles (UAV), could go a long way toward helping that mission. According to the company, the Solara 60 and two other UAVs introduced that were introduced last year, are capable of flying for five years without the need to land.

This 2013 video from TomoNews US shows the capabilities of Titan's UAVs:

According to TechCrunch's source at Titan, Facebook could buy the company for $60 million.

"From our understanding, Facebook is interested in using these high-flying drones to blanket parts of the world without Internet access, beginning with Africa," the report reads. "The company would start by building 11,000 of these [UAVs], specifically the “Solara 60″ model."

Titan's chief technology officer, Max Yaney, founded the company about two years ago to produce UAVs that could perform the same functions as satellites that are closer to the Earth. The company worked closely with the Federal Aviation Administration during the design process, according to Fortune. The FAA only regulates Class A airspace, which ends at 60,000 feet in the U.S. The Solara is designed to in the tropopause, a zone about 65,000 feet above sea level. It's described as a calm area with winds that are typically less than five knots.

The drones have internal battery banks that store solar energy to power the vehicles at night.

"We want something very simple and that doesn't take up all of your time and energy to keep it running," Titan's chief electrical engineer, Dustin Sanders, told Fortune in 2013. "If all you need is one person to keep an eye on the aircraft, that completely changes things.

"We're trying to change the mindset on how aircraft should operate."