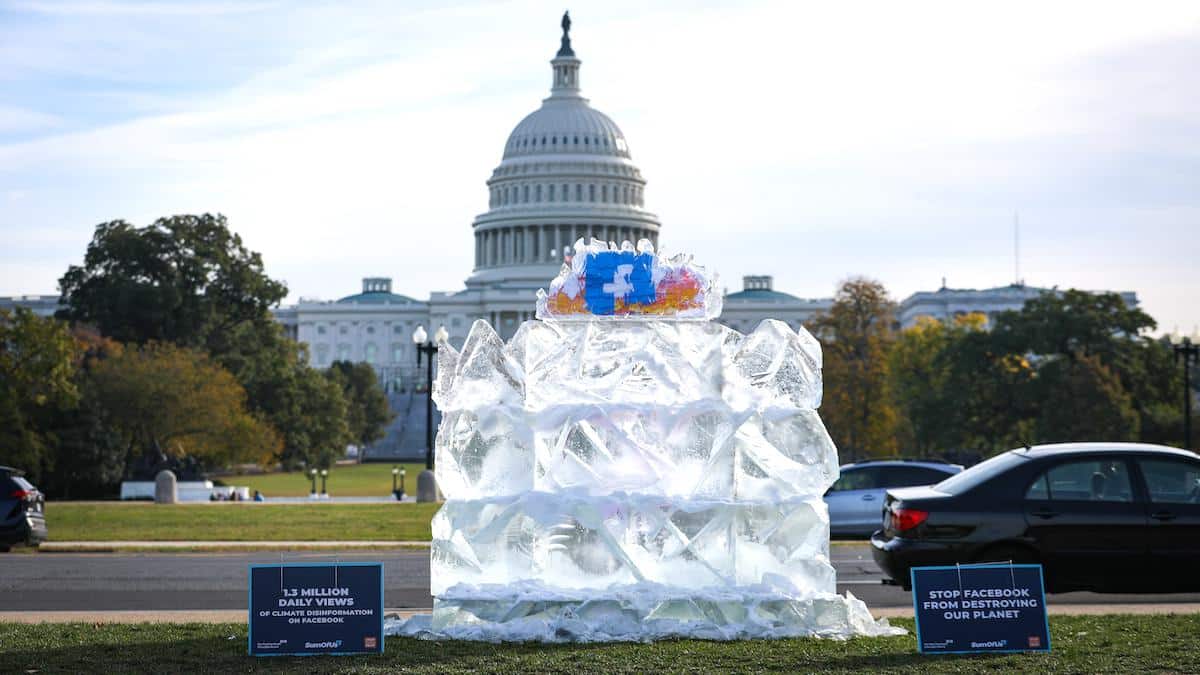 Climate activists protest the spread of climate disinformation on Facebook, with an ice sculpture in front of the U.S. Capitol in Washington, DC on Nov. 4, 2021. Yasin Ozturk / Anadolu Agency via Getty Images

A new report finds that views of climate misinformation posts on Facebook are reaching an average of 818,000 to 1.36 million views daily.

This estimate is up to 13 times more than the number of views that legitimate posts in Facebook’s own Climate Science Center receive.

The report, On the Back Burner, examines 48,700 posts by 196 accounts from January to August 2021. The results confirm what many people already knew or suspected — that Facebook is allowing misinformation to easily be digested, shared, and added to.

Stop Funding Heat, an organization behind the report (along with Real Facebook Oversight Board, a group of activists), also found that Facebook isn’t just a platform for misinformation. The social media giant also allows these misinformation campaigns to run as sponsored posts.

Stop Funding Heat describes itself as “a group of people concerned at the way newspapers, news sites and online platforms readily spread climate lies in the pursuit of sales, clicks or vested interests,” and “a campaign mainly powered by volunteers, created by not-for-profit Reliable Media.”

In the research, the team found 113 advertisements with an estimated 11.7 million to 14.1 million views. These sponsored posts contained phrases such as “climate change is a HOAX.” Facebook has reportedly known about the posts since 2020, but both paid and organic climate misinformation content continues to spread.

Facebook’s parent company, now called Meta, has adopted third-party fact-checking practices since 2016 in order to remedy the long-standing issue of spreading misinformation on the platform. Yet only a small percentage, just over 3%, of the posts evaluated in the study were reviewed by Facebook’s third-party fact checkers.

The company’s response so far has been that the report relies on “made up numbers and a flawed methodology to suggest content on Facebook is misinformation when it’s really just posts these groups disagree with politically,” as reported by Grist.

Yet the report notes that it relied on analytics and data directly from Facebook as much as possible. The researchers also highlighted Facebook’s climate progress up to this point, but outlined that the platform needs to do more when it comes to combating climate misinformation, which comes from both dedicated accounts that push this information almost constantly to more subtle posts from users like media personalities or far-right media pages.

“It is worth acknowledging from the outset that Facebook has impressive achievements when it comes to its sustainability policies. Facebook also recently announced a $1 million project to support work on climate misinformation,” says a statement about the report. “But as that same article references, the reality is that all of this activity is totally undermined by the climate misinformation they profit from in the first place. As a big tech platform, and one of the world’s largest companies, it is Facebook’s responsibility to be a net positive in this area; and that means combating the problem head on.”

The report, along with other organizations, journalists, investors, and even governments, calls for Facebook to take a swift three-prong approach to fixing the widespread issue:

Stop Funding Heat is also calling on Facebook to completely ban the advertising of climate misinformation.