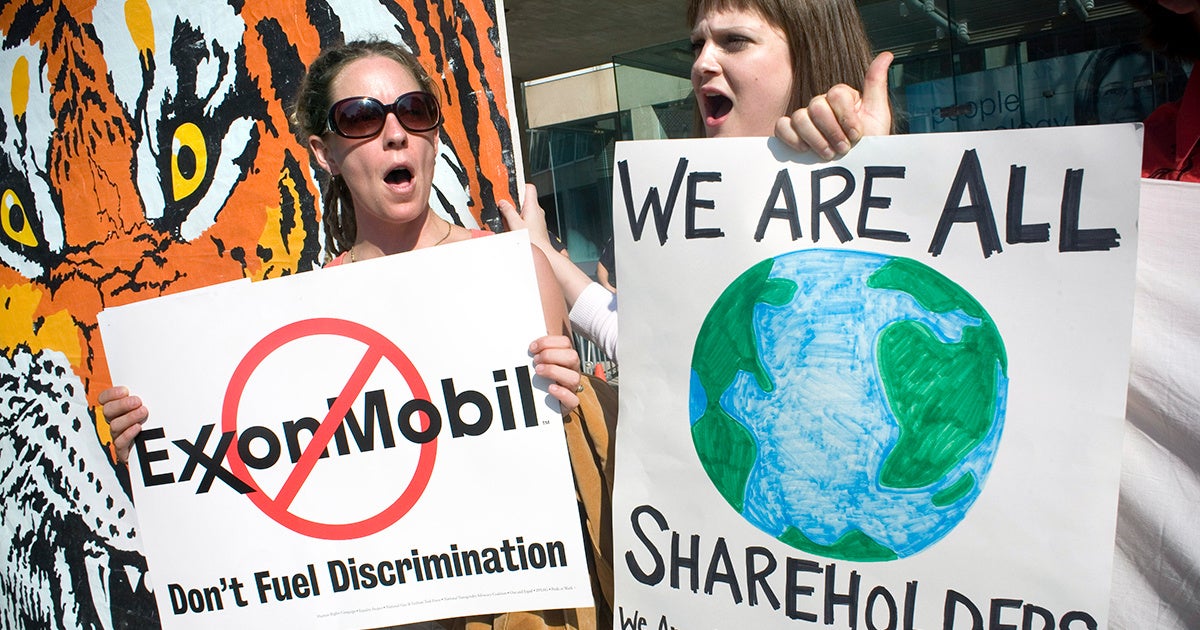 Nearly 90 percent of ExxonMobil’s 2017 donations to climate science denier groups went to the U.S. Chamber of Commerce and three organizations that have been receiving funds from the company since it started bankrolling climate disinformation 20 years ago: the American Enterprise Institute, Manhattan Institute and American Legislative Exchange Council, which—in a surprise move—ExxonMobil recently quit. (More on that later.)

ExxonMobil’s funding priorities belie the company’s purported support for a carbon tax, the Paris climate agreement and other related policies, which it reaffirmed in a January blog post by its public affairs director, Suzanne McCarron. If, as McCarron claims, ExxonMobil is “committed to being part of the solution,” why is the company still spending millions of dollars a year on groups that are a major part of the problem?

There is ample evidence that Exxon was fully aware of the danger its products pose to the planet since the 1980s and likely even earlier. Nonetheless, the company helped initiate a fossil fuel industry-backed climate disinformation campaign in 1998, a year before it merged with Mobil.

The company’s behind-the-scenes role went largely unnoticed for nearly a decade, but in early 2007, a report by the Union of Concerned Scientists (UCS) revealed that it had spent at least $16 million between 1998 and 2005 to fund a network of more than 40 think tanks and advocacy groups to manufacture doubt about climate science under the guise of being neutral, independent analysts.

In response to the negative press generated by the UCS report, ExxonMobil vowed in its 2007 Corporate Citizenship Report to “discontinue contributions [in 2008] to several public policy research groups whose positions on climate change could divert attention from the important discussion on how the world will secure the energy required for economic growth in an environmentally responsible manner.”

Note that the company only promised to stop funding several policy groups, not all, and it did in fact drop some high-profile grantees, including the Cato Institute, Competitive Enterprise Institute, Heartland Institute and Institute for Energy Research. But it never completely ended its support for the disinformation network. From 1998 to 2007—the year of the pledge—it spent nearly $23 million on it. From 2008 through last year, it spent another $13.17 million, for a total of $36.13 million over the last 20 years. As far as anyone has been able to determine from publicly available data, only Charles and David Koch, the multibillionaire owners of Koch Industries, have spent more to deceive the public about climate science and block government action on climate change.

In 2014, ExxonMobil committed to give $5 million to the U.S. Chamber of Commerce’s Capital Campaign in $1 million-a-year increments on top of its annual dues, despite the lobby group’s history of misrepresenting climate science and the economics of transitioning to clean energy. Last year, the company kicked in another $15,000 for the Chamber’s Corporate Citizenship Center, bringing its total donation to $1,015,000.

If one takes ExxonMobil’s climate policy claims at face value, the Chamber’s positions are polar opposite.

ExxonMobil has been very vocal about its support for the Paris climate agreement, for example, and during its former CEO Rex Tillerson’s brief stint as U.S. secretary of state, he reportedly implored President Trump to keep the U.S. in it. What did Trump cite last year when he announced he was pulling out of the accord? A widely debunked report from the U.S. Chamber of Commerce.

Cosponsored by a former ExxonMobil grantee—the American Council for Capital Formation (ACCF)—the report maintained that the Paris accord would cost the U.S. economy nearly $3 trillion over the next several decades and eliminate 6.5 million industrial sector jobs by 2040.

According to analyses by the Associated Press (AP), Politifact and The Washington Post, however, the Chamber and ACCF cooked the books. As the AP put it: “The study makes worst-case assumptions that may inflate the cost of meeting U.S. targets under the Paris accord while largely ignoring the economic benefits to U.S. businesses from building and operating renewable energy projects.”

The American Enterprise Institute (AEI), an 80-year-old free-market think tank in Washington, DC, has received more from ExxonMobil than any other climate science denier organization. In 2017, ExxonMobil gave AEI $160,000, bringing its total to $4.49 million since 1998.

Economist Benjamin Zycher, the only AEI staff member who writes regularly about climate issues, rejects mainstream climate science, insists a carbon tax would be “ineffective,” and has called the Paris agreement an “absurdity.” He not only disagrees with ExxonMobil’s professed climate policy positions, he has attacked the company for taking them.

Zycher’s colleague Mark Thiessen, a regular contributor to The Washington Post, also dismisses the Paris accord, maintaining that “free enterprise, technology, and innovation—not pieces of parchment signed in Paris and Kyoto—will revolutionize how we produce and consume energy.” Never mind that it often takes regulations to drive innovation and force corporations to adopt cleaner technology. Without federally mandated air pollution controls, for example, power plants and other industrial facilities would be emitting considerably more toxic pollution than they do today.

Cass, who regularly testified before Congress against Obama administration climate efforts, told Stossel that the Paris climate agreement “was somewhere between a farce and a fraud.” Stossel wholeheartedly agreed. “The Earth is warming,” Stossel intoned in his wrap-up. “Man may well be increasing that. But the solution isn’t to waste billions by forcing emissions cuts here while other countries do nothing. Well, pretend to make cuts. Trump was right to repudiate this phony treaty.”

Waste billions while other countries do nothing? Besides the fact that it is now cheaper to produce electricity from utility-scale solar and wind energy in the U.S. than nuclear, coal and even natural gas, as of last November—a year after the Paris agreement officially went into effect—China, India and other major carbon emitters were already making significant progress in meeting their Paris accord commitments.

The other glaring problem with the segment is it’s a prime example of fake news. With a former network news show host playing anchor, viewers could easily mistake the piece as a clip from of a legitimate newscast. At least one member of the conservative echo chamber treated it that way. The Washington Free Beacon, an online news organization funded by GOP megadonor Paul Singer, ran a news story about the Stossel-Cass interview on March 19.

On July 12, ExxonMobil announced it had ended its longtime membership in the American Legislative Exchange Council after a disagreement over the corporate lobby group’s climate policy. From 1998 through last year—when Exxon Mobil reported it gave the group $60,000—ALEC received $1.93 million from the oil company.

Over the last two decades, ALEC has routinely featured climate science deniers at its conferences and supplied state lawmakers with a range of fossil fuel industry-drafted sample legislation, including bills that would restrict investment in renewables, eliminate incentives for electric vehicles, and hamper the solar industry from selling electricity directly to residential and business customers.

Since 2012, more than 100 corporations, including BP, ConocoPhillips, Royal Dutch Shell and electric utilities Entergy, Pacific Gas & Electric and Xcel Energy, have severed ties with ALEC, in many cases because of its regressive policy positions.

ExxonMobil’s exit from ALEC came just months after the company fought to defeat a draft resolution sponsored by the Heartland Institute—an ExxonMobil grantee from 1998 through 2006—calling on the U.S. Environmental Protection Agency (EPA) to “reopen and review” its “flawed” conclusion that climate change poses a threat to human health. The EPA’s “endangerment finding” requires the agency to regulate carbon dioxide and other global warming emissions as hazardous pollutants under the Clean Air Act.

After ExxonMobil and the Edison Electric Institute (EEI), a utility trade group, objected to the resolution, the Heartland Institute withdrew it and accused the two of being in league with the likes of Greenpeace and the Sierra Club.

“Big corporations like ExxonMobil and trade groups like EEI have long been members of the discredited and anti-energy global warming movement,” Heartland’s president, Tim Huelskamp, said in a Dec. 7 press release. “They’ve put their profits and ‘green’ virtue signaling above sound science and the interests of their customers.”

Huelskamp’s ludicrous assertion notwithstanding, some might construe ExxonMobil’s exit from the American Legislative Exchange Council as a welcome change in direction. The company’s money trail, however, clearly shows that it is still financing climate science denier groups that denigrate any and all climate policy options and provide cover for Congress and the current administration to do nothing. Until ExxonMobil stops funding these groups, its avowed support for a carbon tax, the Paris agreement and other climate initiatives can’t be seen as anything more than a cynical PR ploy.