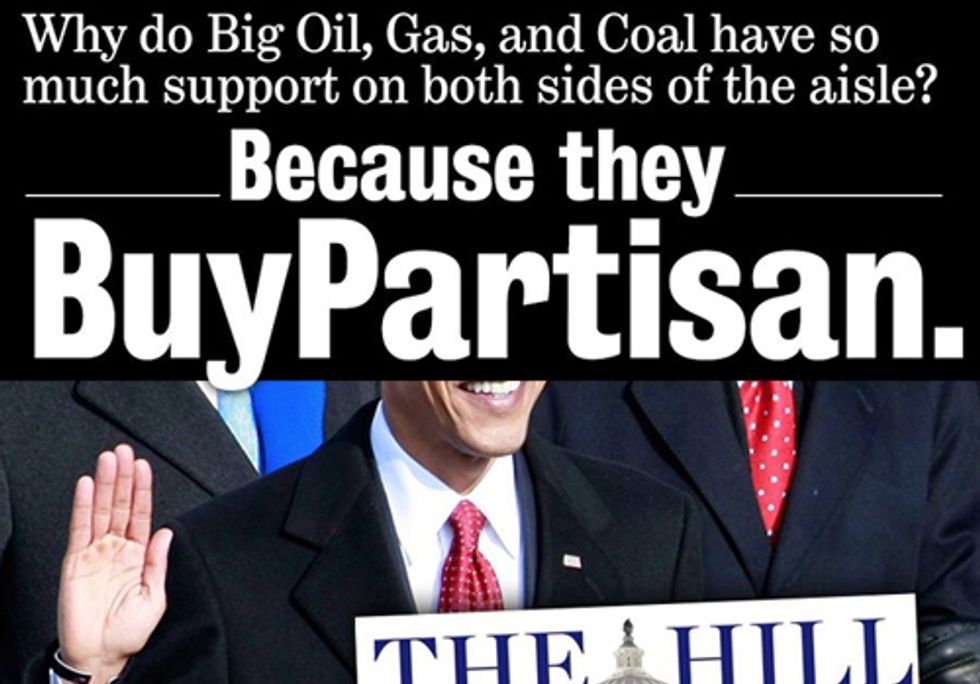 President Barack Obama will be publicly sworn in today—on Martin Luther King Jr. Day—to serve his second term as the 44th President of the U.S.

Today is also the three-year anniversary of Citizens United v. FEC, a U.S. Supreme Court ruling that—in a 5-4 decision—deemed that corporations are "people" under the law. Former U.S. Sen. Russ Feingold (D-WI)—who now runs Progressives United (a rhetorical spin-off of Citizens United)—said in Feb. 2012 that the decision "opened floodgates of corruption" in the U.S. political system.

Unlike for his first Inauguration, Obama has chosen to allow unlimited corporate contributions to fill the fund-raising coffers of the entity legally known as the Presidential Inaugural Committee. Last time around the block, Obama refused corporate contributions for the Inauguration Ceremony as “a commitment to change business as usual in Washington.”

But not this time. With a fundraising goal of $50 million in its sights, the Obama Administration has "opened floodgates" itself for corporate influence-peddling at the 57th Inaugural Ceremony.

A case in point: the Obama Administration's corporate backers for the Inaurguation have spent more than $283 million on lobbying since 2009, the Center for Public Integrity explained in a recent report.

“It’s a deeply disturbing move, and a reversal from the positive steps they took in 2009,” Robert Weissman, president of Public Citizen told Roll Call. “Corporations make donations to events like the inaugural festivities because they get something back in return."

One of the biggest givers so far is none other than what Pulitzer Prize winning investigative journalist Steve Coll calls a "Private Empire"—ExxonMobil.

Despite these oligarchic-type bottom lines, ExxonMobil doesn't even pay its fair share in taxes, as ThinkProgress explained in a March 2012 article:

Citizens for Tax Justice reported Exxon paid only 17.6 percent taxes in 2010, lower than the average American, and a Reuters analysis using the same criteria estimates that Exxon will pay only 13 percent in effective taxes for 2011. Exxon paid zero taxes to the federal government in 2009.

In practice, this means that ExxonMobil actually pays less in taxes by percentage than an average Middle Class American family.

For a corporation with financial wealth of this magnitude and one that, to boot, evades paying taxes, $260,000 is truly a "drop in the bucket." And yet in a political system favoring those who can "pay to play," it's a true game-changer in terms of gaining direct access to the Administration.

Critics say it's more of the same out of an Obama Administration that in the first term had a cozy relationship with corporate patrons.

“It fits into a pattern of not treating this campaign-finance issue with concern when in fact it is of great concern to the integrity of the political process and our democratic system,” Fred Wertheimer, president of Democracy 21, told The Hill.

The Obama team's response? According to them, they are champions of campaign-finance reform and anti-corruption measures.

“This president has done more to reduce the influence of special interests in Washington than any administration in history,” White House spokesman Eric Schultz told The Hill.

It looks as if Oil Change International has hit the nail on the head in framing this one, asking and answering the following question with an accompanying graphic co-created with The Other 98%: