What’s Good for Exxon Is Bad for America 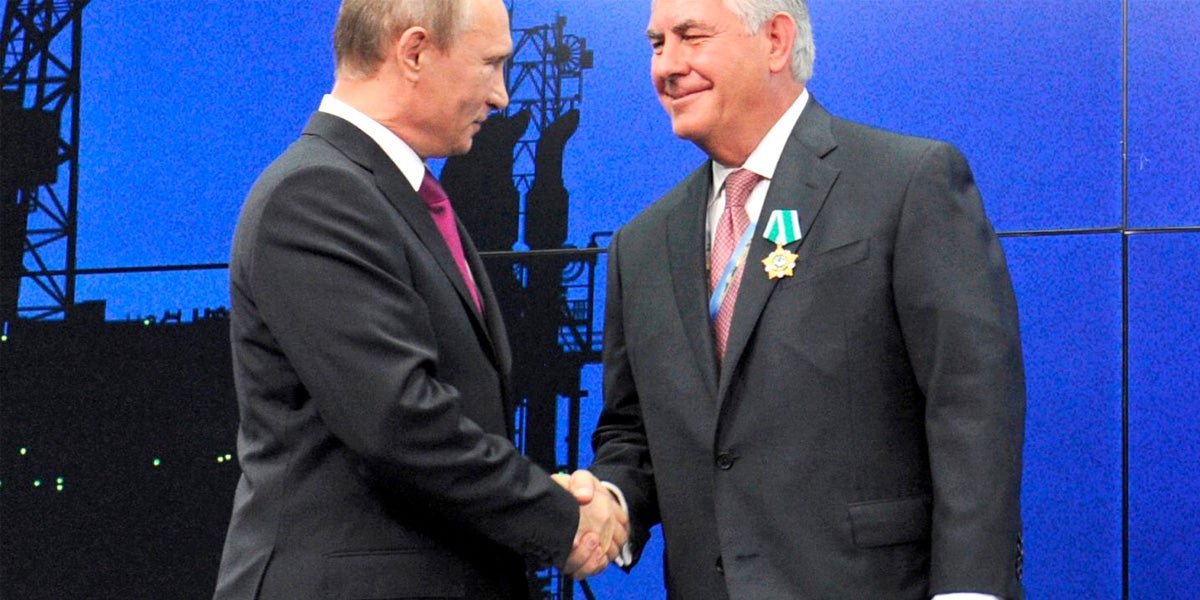 Whatever his voters intended, we can abandon the notion that President-elect Donald Trump is a right-wing populist. Right-wing, yes, authoritarian, probably, demagogue certainly.

But his cabinet gives the lie to populism as part of his character. Wall Street may have paid Hilary Clinton hundreds of thousands of dollars to make speeches; but it is Trump who has given Wall Street four cabinet slots, three of them to Goldman-Sachs alumni. (Imagine the outcry if a President Clinton had done that). There’s a clutch of corporate CEOs—sate, labor, small business; a retired military trio—national security advisor, defense and homeland security; Republican senators, governors and congressmen make up the remainder, plus Ben Carson, who had conceded he was not qualified for such a post. So far, we have four billionaires.

Based on his choices Trump doesn’t like or respect Hispanics, but admires Russia greatly.

Trump himself just explained that he wanted a cabinet of “people that made a fortune!” His argument—making a fortune is proof that someone is a great negotiator and that’s the job of the cabinet. This is hardly the stuff of populism, right or left. His choices reveal some other traits. He leans toward inside financial manipulators, military brass and the businesses that dominated the American economy of his youth—fossil fuels, manufacturing and real estate. He has no interest in the major drivers of the economy of the future—technology, communications, services other than finance. The American “Greatness” he aspires to, as many said during the campaign, is the world as it existed before 1970. This is pure reaction, nostalgia as politics, memory as vision.

If anyone has any questions left about Donald Trump's #energy plans, check out his new website. https://t.co/ZNxaXph1P8 via @EcoWatch

Steve Bannon’s choice as senior counselor is clearly the most outrageous. For a while it was hard to decide which of the choices ranked as the second most appalling—was it a labor secretary who wants to drive down wages for working Americans, an U.S. Environmental Protection Agency administrator who believes that the cornerstone of the agency’s mission—clean air and pure water for every American—is outrageous federal overreach or an interior secretary who wants to turn America’s public lands over to commercial interests?

Sadly, those have all been, in the pun of the moment, “trumped” by the choice of Exxon CEO Rex Tillerson as secretary of state. Tillerson has a rock-solid record of putting the interests of the oil and gas industry ahead of those of the U.S. He never repeated, but also never retracted, the explicit statement by his predecessor, Lee Raymond, that ExxonMobil was not an American company and did not make its decisions based on “what’s good for” the U.S.

He should be asked in his confirmation hearings whether he ran the company as an American or rogue, enterprise. The evidence is fairly clear. ExxonMobil was the first oil company to challenge U.S. foreign policy on channeling the oil wealth of Iraq through its central government, signing an oil exploration agreement with the Kurdish Authority. More ominously, when the U.S. was imposing sanctions on Russia, Tillerson maneuvered to complete an Exxon well drilling project in the Arctic Ocean even after the U.S. imposed sanctions.

Exxon’s completion of the well enabled Putin to prove to the world that Russia’s Arctic reserves were a reality, strengthening his hand is withstanding the pressure of sanctions. It also established Exxon as a reliable friend of the Russian autocrat, insuring Exxon’s billion dollar joint ventures from hostile Russian action while they remained suspended by sanctions. But Exxon-Mobil went further, negotiating new deals with Russian oil companies already slated for sanctions by the West at that summer’s St. Petersburg Economic Forum. One observer commented that “By defying the White House, the oil majors salvaged what would have otherwise been an embarrassing event for the Kremlin.”

Tillerson openly boasted of lobbying against and evading the impact, of the sanctions, boasting that “Our views are being heard at the highest levels. … There has been no impact on any of our business activities in Russia to this point, nor has there been any discernible impact on the relationship” with Rosneft, one of the sanctioned Russian oil companies closest to Putin. Later sanctions bit. The company has reported that it has lost a billion dollars to the final Western crackdown on investing in Russia. Raymond’s view that Exxon is not an American company, which Tillerson clearly shared, is not surprising. ExxonMobil’s reserves are predominantly—70 percent—foreign. (Canadian tar sands are the largest single portion of those foreign reserves). So, relationships with the governments of places like Russia, Nigeria and Qatar are extremely important to Exxon and Tillerson.

But Russia, after Canada, is uniquely important to Exxon (and Tillerson’s pension which is tied to the company’s stock price). Exxon’s deals position it, once sanctions are gone to exploit, the country’s Arctic shelf, estimated to contain 105 billion barrels of oil and gas, more than the U.S. and Canadian Arctic combined. Putin’s Foreign Minister, Sergei Lavroy, has publicly endorsed the choice of Tillerson as a “pragmatist.”

Media coverage of Tillerson’s Putin connections have focused on one aspect of the US conflict with Russia—Putin’s aspirations to recover influence and perhaps actual control over areas on Russia’s borders which were formerly part of the Soviet Empire—particularly the Ukraine and the Baltic.

But there are looming and more immediate threats to American interests. Over the last four months, Russia has constructed a new partnership with OPEC to manipulate global oil markets, limit supply and raise prices. Under the unprecedented agreement signed in Vienna side by side with OPEC, Russia along with Oman, Azerbaijan and the Sudan, agreed to cooperate with OPEC and coordinate cuts in production. Markets responded to these events by raising oil prices by 12 percent. Russia has now joined Saudi Arabia and Iran in declaring war not only on climate protection, and the long term survival of the planet, but on the core short term economic interests of U.S., Japanese, Indian, Chinese and European drivers, shippers and economies—affordable fuel. Global economic growth is once again threatened by manipulated oil markets.

Exxon is a key beneficiary if producers win this economic war. And Exxon’s CEO has just been nominated to govern the U.S. response to this war. It’s as if after Pearl Harbor Franklin Roosevelt had nominated a key Japanese industrialist to mobilize American industry to win the war.

Tillerson should face some tough questions in his confirmation hearings. And then his nomination should be quashed—the Senate should not confirm the first secretary of state in American history whose primary demonstrated loyalty was not to the U.S.