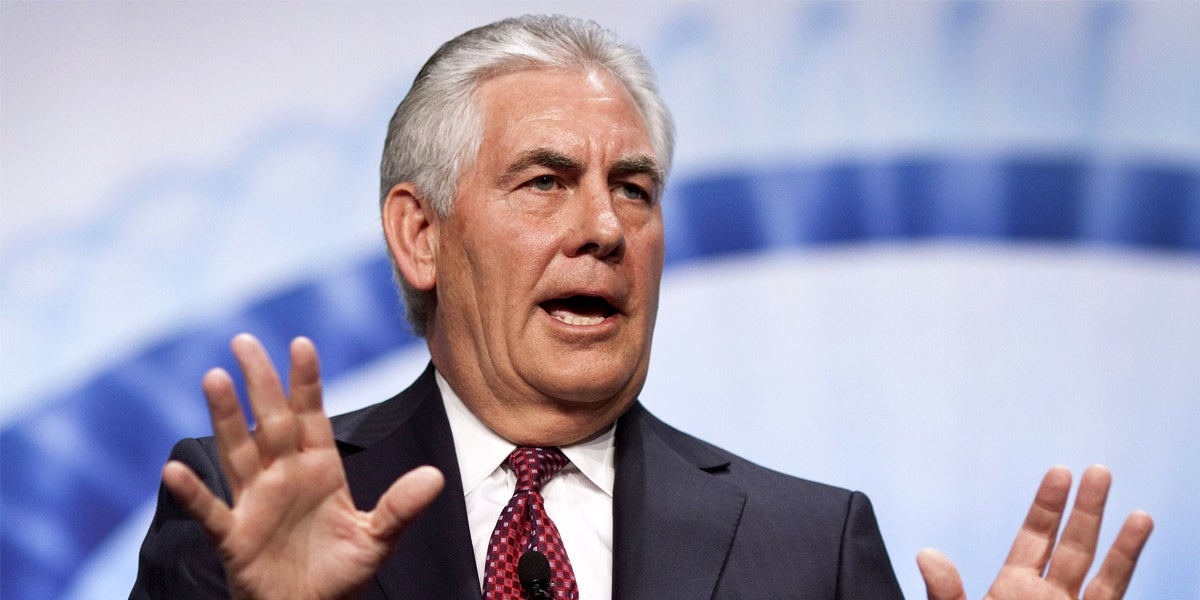 “It’s time Rex Tillerson step down or be removed,” said Gigi Kellett of Corporate Accountability International, following an announcement on Thursday that ExxonMobil will pay $2 million for violating U.S. sanctions against Russian officials while the now-secretary of state was the company’s CEO.

“ExxonMobil demonstrated reckless disregard for U.S. sanction requirements,” according to enforcement filing released by the Treasury Department’s Office of Foreign Assets Control (OFAC), which issued the penalty. Though the fine is reportedly the maximum penalty allowed, it’s pittance to one of the world’s most profitable and powerful corporations, which last year reported a profit of $7.8 billion.

“This is nothing more than a parking ticket,” Kellett said.

OFAC said ExxonMobil violated sanctions against Russian officials in May 2014, by “signing eight legal documents related to oil and gas projects in Russia with Igor Sechin, the President of Rosneft,” Russia’s state-owned oil company. The sanctions were established two months earlier by then-President Barack Obama, in response to the Russian government’s actions in Ukraine.

In a statement Thursday, ExxonMobil claimed it “followed the clear guidance from the White House and Treasury Department when its representatives signed the documents,” and that “OFAC is trying to retroactively enforce a new interpretation” of the sanctions, adding, “OFAC’s action is fundamentally unfair.”

The OFAC filing, however, says the company’s “senior-most executives knew” the sanctions barred them from signing deals with Sechin, calling ExxonMobil “a sophisticated and experienced oil and gas company” that routinely navigates U.S. sanctions and export rules. Tillerson stepped down as CEO of ExxonMobil in December 2016 to lead the Trump administration’s State Department. After the department refused reporters’ requests for comment on Thursday, Foreign Policy’s Robbie Gramer took to Twitter:

1/ The State Department won't even comment on Exxon being fined for violating Russia sanctions while Tillerson was CEO. They referred me to

2/ Exxon and Treasury for comment. As if its irrelevant to the State Department that the Secretary of State for the Trump Admin was at the

3/ helm of a company violating sanctions on Russia, and is now tasked with repairing US-Russia relations and resolving the Ukraine crisis

In addition to calling for Tillerson’s resignation, Kellett said: “At every level, ExxonMobil and the rest of the fossil fuel industry must be held accountable for their abuses. That may start with this $2 million fine, but it will end when all Big Polluters are held liable for their abuses and cast out of policymaking for good.”

Celebrating Thursday’s small victory against the world’s largest oil company, Greenpeace USA Climate Director Kelly Mitchell said, “Even with Rex Tillerson leading the State Department, people in this country can hold powerful corporations accountable and must continue to do so.”

“This move should embolden United States attorneys general in their investigations into what ExxonMobil and Rex Tillerson knew about the risks of climate change and the company’s potential withholding of that information from the public and shareholders,” Mitchell added.

The attorneys general of New York and Massachusetts have launched probes to investigate reported that the company, for decades, misled its investors and the public about the dangers of climate change. The allegations have also lead to calls for Tillerson to resign from his position as head of the U.S. State Department.