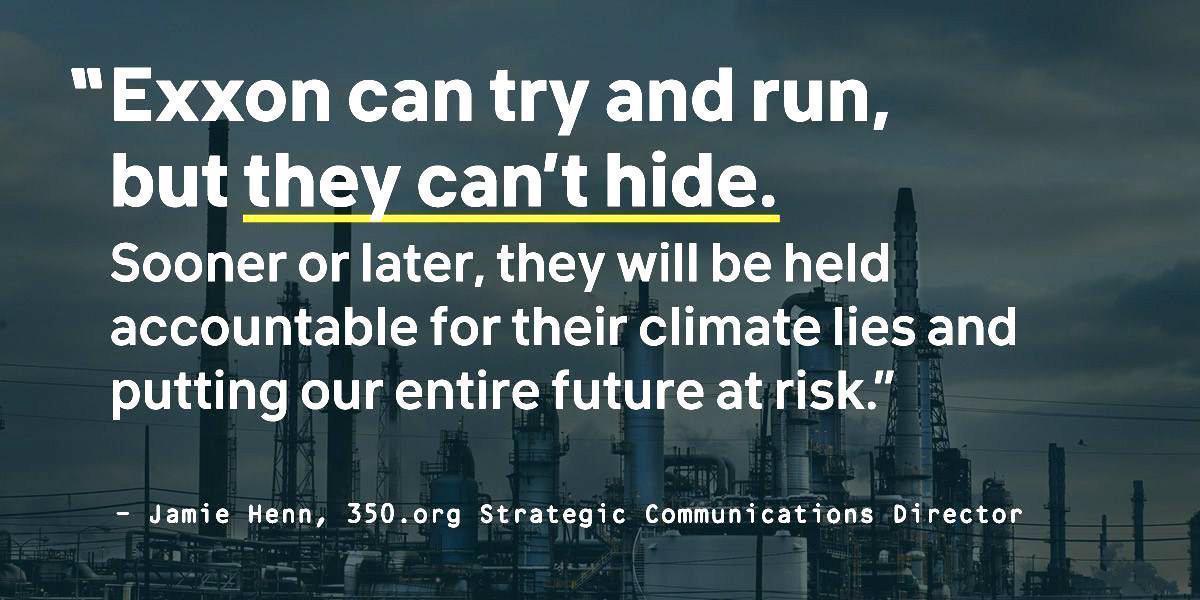 Shareholders of ExxonMobil voted by a 62.3 percent shareholder majority Wednesday instructing the oil giant to report on their impacts on climate change. The result of this vote is a sign that activist pressure on the company is working, said 350.org, a leading international climate campaign.

Along with the shareholder uprising, Exxon is also facing an investigation by multiple Attorneys General over whether it lied to the public about climate change and a divestment campaign that has helped convince more than 730 institutions representing $5.4 trillion in assets to go fossil free.

'We Are Going to Be Selling Your Exxon Shares, Sir, Because We Don't Believe in the Future That You Stand For' https://t.co/nLvvmFUrc4

Exxon’s climate lies are finally catching up with them. The company is facing public protest, shareholder anxiety, multiple investigations and a growing divestment campaign. They can try and run from this issue, but they can’t hide. Sooner or later, this company will be held accountable for their role in destroying our climate and putting our entire future at risk.

Any real climate risk assessment will show that Exxon’s drill-baby-drill business plan is incompatible with a livable planet. Despite shareholder protests, they’re still doubling down on fossil fuels when the world is moving in the opposite direction. Exxon’s refusal to adapt their business model to a carbon constrained world should send investors running for the exits.

An investment in Exxon is still an investment in climate chaos. Until Exxon commits to keeping fossil fuels in the ground, investors have a moral obligation to move their money elsewhere. That includes major investors like New York State’s $170 billion pension fund.

When the markets realize that Exxon won’t be able to burn its remaining oil and gas reserves because doing so would put cities like New York and Shanghai underwater, the company’s share price is going to plummet. That’s not a matter of if, but when.

Exxon is going the way of the typewriter because they’re unwilling and unable to adjust to the changing energy landscape. Our job is to make sure they don’t take the rest of us down with them.