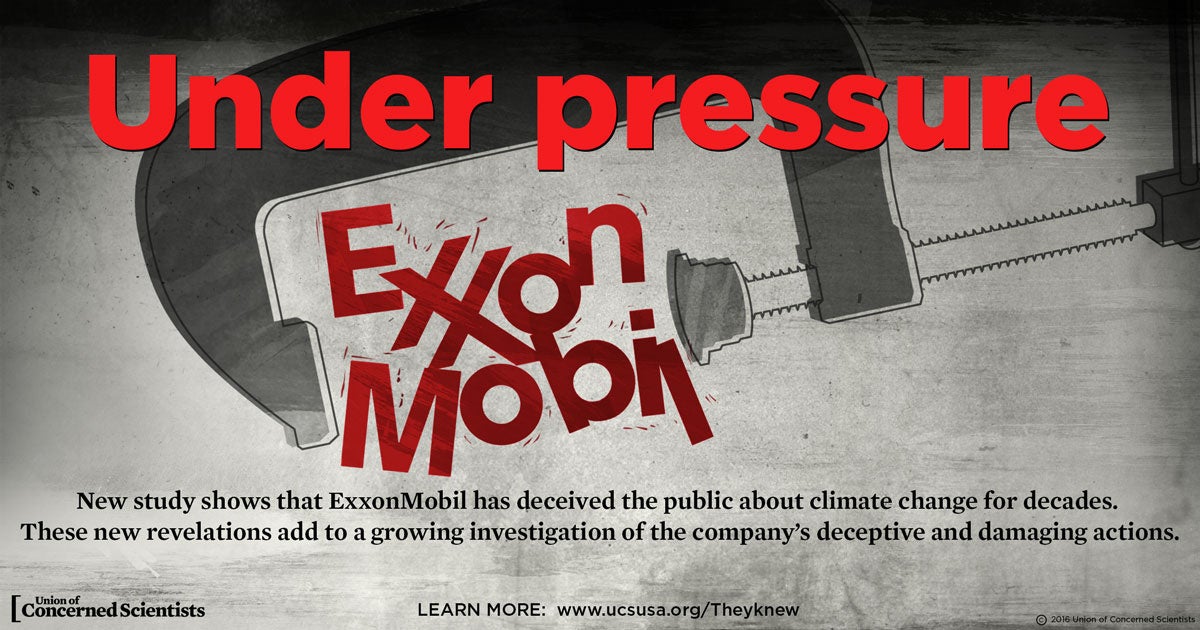 A new study published in the journal Environmental Research Letters by Dr. Geoffrey Supran and Dr. Naomi Oreskes of Harvard University marks an important advance in the examination of fossil fuel companies’ responsibility for climate change. What makes this paper noteworthy is that it’s the first peer-reviewed content analysis of ExxonMobil’s climate change communications—and it concludes that the company misled the public. “In short, Exxon Mobil contributed quietly to climate science and loudly to raising doubts about it,” the authors wrote in a New York Times op-ed.

ExxonMobil has already dismissed the study’s conclusions and questioned the authors’ motives. Under the leadership of CEO Darren Woods, the company is attempting to cover the sun with one finger. By insisting that it does not cover up climate science, ExxonMobil misrepresents the real issue: its failure to act on scientific knowledge of the devastating climate impacts of its product. 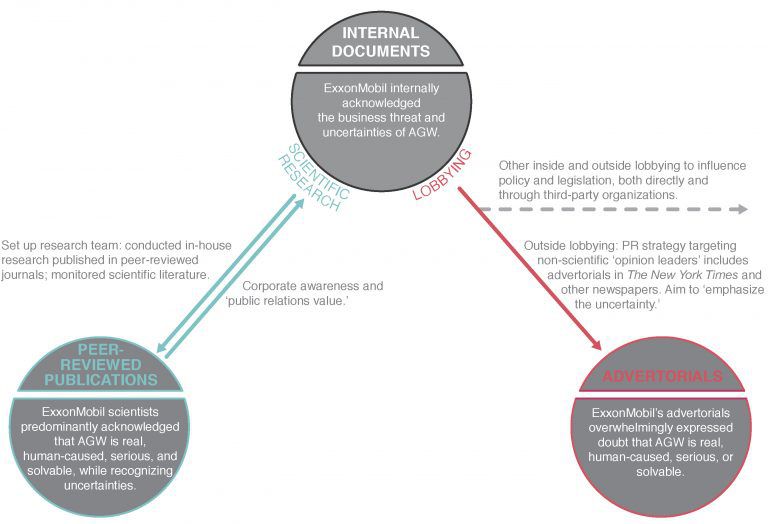 A Track Record of Climate Deception

Many others have contributed to this research:

ExxonMobil challenged the public to “Read all of these documents and make up your own mind.” The study’s authors took up that challenge.

Turning Over a New Leaf?

The Supran-Oreskes study covers the period 1977-2014—prior to the tenure of current CEO Woods. Woods, who took over from Secretary of State Rex Tillerson in January, has expressed support for the Paris climate agreement and for a carbon tax. The company’s current stated position is that “the risk of climate change is clear and the risk warrants action.”

As Supran and Oreskes highlight, ExxonMobil has several webpages dedicated to backing up its rebuttal of “allegations that ExxonMobil suppressed climate change research,” including a “10-page document listing the over 50 peer-reviewed articles on climate research and related policy analysis from ExxonMobil scientists from 1983 to the present.” The company claims that the list “undercuts the allegation…that ExxonMobil sought to hide our research.”

ExxonMobil’s present-day denial that it suppresses climate science is itself a misrepresentation and a diversion.

The Risk of Stranded Assets

In its internal deliberations ExxonMobil has, evidently, long recognized the reality of a global “carbon budget” that cannot be exceeded if global average temperature increases are to be kept to safe levels. However, the company pretends to its own shareholders that business-as-usual levels of fossil fuel production will continue.

Supran and Oreskes (2017:12) find that in its less public-facing communications ExxonMobil addressed “carbon budgets” consistent with stabilization of emissions of heat-trapping gases, but ignored the risks of stranded fossil fuel assets in its New York Times advertorials.

ExxonMobil’s 2016 Energy and Carbon Summary, published in 2017, states firmly that “We expect all hydrocarbons in our proved reserves to ultimately be produced and not be ‘stranded.'” And as my colleague Peter Frumhoff has written, ExxonMobil maintains a business model that aggressively invests in developing future reserves and assumes a heavy long-term reliance on fossil fuels.

In line with this expectation, ExxonMobil fought a 2017 shareholder proposal calling for the company to report annually on how it will ensure that its business remains resilient in the face of climate change policies and technological advances designed to limit global temperature increase to well below 2°C. Recommending a vote against the proposal, ExxonMobil’s board wrote:

Many third party scenarios that represent a 2-degree Celsius pathway, including IEA’s 450 Scenario, show natural gas demand continuing to grow and oil playing a prominent role in meeting the world’s energy demand through 2040. Even under the 450 and the New Policies scenarios, substantial upstream oil and gas investment of $11 to $18 trillion will be needed through 2040 to meet global demand, largely due to natural field decline. While ExxonMobil currently contributes less than 3 percent of global production, we are well positioned to support additional development required to meet demand as a result of our diverse resource base, superior project execution capabilities and industry-leading returns on capital employed.

In a stunning and decisive rebuke to ExxonMobil’s leadership, 62 percent of shareholders voted in favor of the proposal at the company’s annual meeting in May. The ball is now in Darren Woods’s court to address growing shareholder concern about climate risk.

And the onus is also on CEO Woods to provide convincing evidence that ExxonMobil will put a stop to the contradictory and deceptive communications practices documented by Supran and Oreskes in this study.

With rising questions about ExxonMobil’s responsibility for climate change—investigations by the New York and Massachusetts attorneys general, lawsuits by California communities affected by sea level rise, shareholder pressure—the company is on the defensive. This analysis is an important contribution to efforts by investors, public prosecutors, and others seeking to hold ExxonMobil accountable for its climate deception and inaction.

Kathy Mulvey is the accountability campaign manager and advocate for the climate and energy team at the Union of Concerned Scientists.