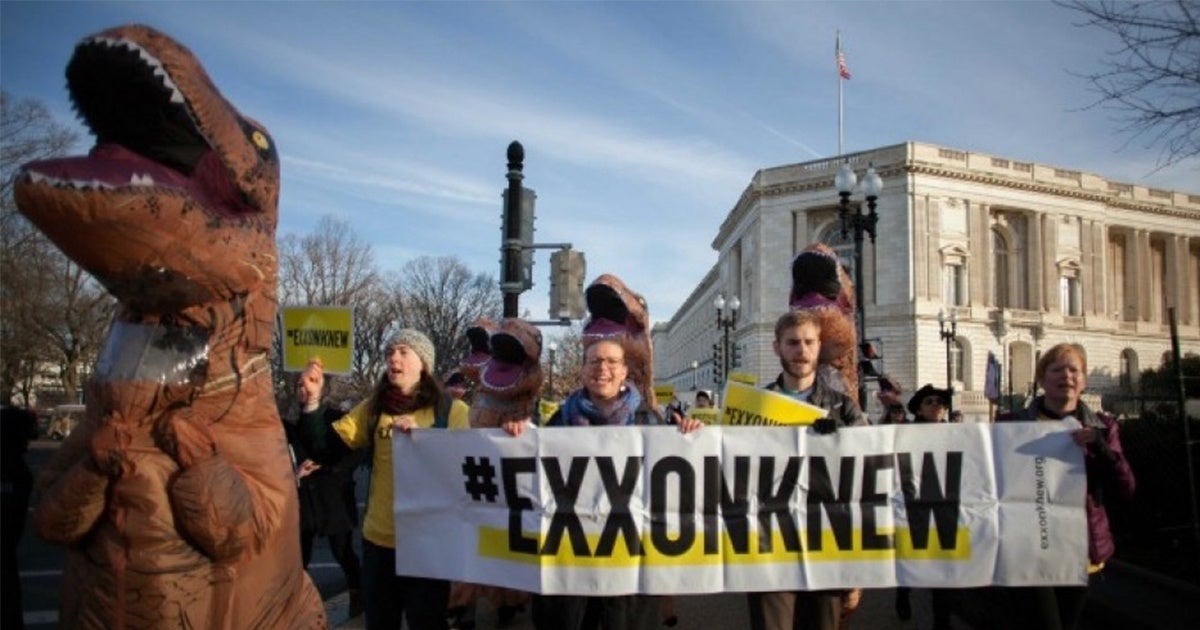 More than 200 people demonstrated in January 2017 against the appointment of former ExxonMobil CEO Rex Tillerson for secretary of state. Eman Mohammed / 350.org

New York state prosecutors last week accused ExxonMobil of trying to discourage witnesses from testifying against the company in a climate fraud case, leading the head of the environmental group 350.org to declare Thursday that “we won’t be intimidated.”

In a statement, May Boeve, the avocacy group’s executive director, also charged that “Exxon is polluting these proceedings just like it has polluted our communities.”

Last October, following a three-year probe and amid growing demands that the dirty energy industry be held accountable for the impacts of its products, then-New York Attorney General Barbara Underwood sued ExxonMobil for defrauding investors about the financial threat of efforts to combat the climate emergency.

Boeve’s statement came in response to allegations from the current state attorney general’s office Friday that the fossil fuel giant is attempting to intimidate third-party witnesses by demanding they disclose all contact they have had with various experts and environmental groups, including 350.org.

InsideClimate News — which exposed ExxonMobil’s decades of climate deception with a damning investigative series in 2015 — reported on the allegations Tuesday:

New court filings reveal that Exxon sent letters to a group of investment advisers and shareholder activists who prosecutors want to put on the stand, informing them they will be subject to subpoenas from the company seeking documents relevant to the case if they choose to testify.
Because of their roles investing in and engaging with Exxon over climate change, these witnesses’ testimony could prove critical to the state’s case.
With opening statements scheduled to begin Oct. 23, a lawyer in New York Attorney General Letitia James’s office wrote that the request would “impose disproportionate burdens on these witnesses in a transparent attempt to discourage them from testifying voluntarily, and threatening to upend the trial schedule.”
The attorney general’s office has asked Justice Barry Ostrager of New York Supreme Court to order Exxon to halt its requests for documents.

Aaron Caplan, a law professor at Loyola Law School in Los Angeles and expert in legal ethics, told the outlet that Exxon’s letter “tiptoes right up to the line of impropriety … And whether it crosses that line is up to interpretation.”

Climate Liability News, which also reported on the filings from James’s office Tuesday, spoke to one expert who characterized Exxon’s move as part of a broader legal strategy.

Yale law professor Douglas A. Kysar, who is not involved in the suit, said the document request feeds into Exxon’s narrative of an “anti-carbon conspiracy” involving liberal academics, foundations, non-governmental organizations, and plaintiffs’ lawyers. The request includes “all communications concerning ExxonMobil between you and Matthew Pawa, Peter Frumhoff, Naomi Oreskes, Geoffrey Supran, the Rockefeller Family Foundation, Sharon Eubanks, Hagens Berman Sobol Shapiro LLP, Richard Heede, Sher Edling, LLP, 350.org, or the Union of Concerned Scientists.”
“The third party witnesses won’t necessarily take this request literally as a threat by Exxon — but they will have to consider the vast expense and inconvenience that would follow from being dragged into the ‘anti-carbon conspiracy’ narrative,” Kysar said.

“The line between ‘normal legal maneuvering’ and ‘intimidation-style tactics’ is a fine one that is almost always pushed by litigants in high-stakes battles like this one,” added Kysar. “Still, the timing and the breadth of the document request by Exxon’s lawyers raises even my cynical eyebrows.”

350.org’s Boeve wrote in an email to supporters Thursday that it is “clear” that “ExxonMobil executives are scared of the power of our movement and the strength of our numbers.”

“This could be the greatest case of corporate fraud in history,” she noted. “This lawsuit is a huge opportunity to set a precedent around the world for holding fossil fuel executives accountable and making them pay for a just transition to a 100 percent renewable energy economy.”

In her statement, Boeve thanked James “for her vigilance in standing up for our communities” and vowed that Exxon’s legal maneuvers won’t deter the movement to make polluters pay for fueling the global climate emergency.

“As communities bear the costs of Exxon’s lies, millions of people led by youth, frontline communities, workers, and more are mobilizing towards the September 20 climate strikes to build a world that works for all of us,” said Boeve. “Together, all of us will hold accountable fossil fuel executives most responsible for the climate crisis, and make them pay for their climate destruction.”