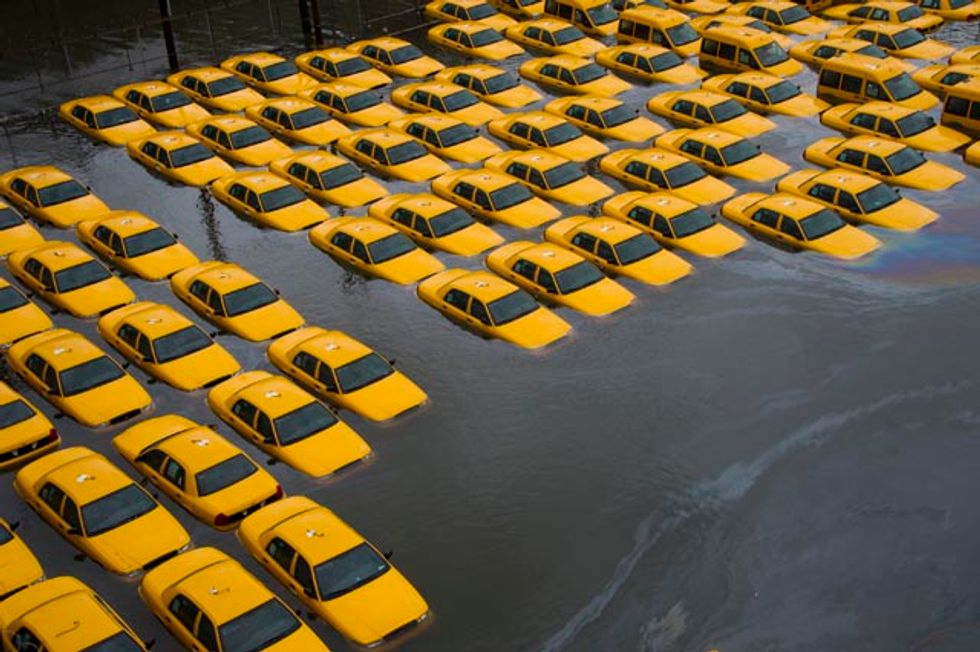 It was another year of incredible weather extremes unparalleled in American history during 2012. Eleven billion-dollar weather disasters hit the U.S., a figure exceeded only by the fourteen such disasters during the equally insane weather year of 2011. I present for you now the top ten weather stories of 2012, chosen for their meteorological significance and human and economic impact.

Video: Hour-by-hour animation of infrared satellite images for 2012. The loop goes in slow-motion to feature such events as Hurricane Sandy, the June Derecho, Summer in March and other top weather events of 2012. The date stamp is at lower left; you will want to make the animation full screen to see the date. Special thanks to wunderground's Deb Mitchell for putting this together!

1. Superstorm Sandy
Hurricane Sandy was truly astounding in its size and power. At its peak size, twenty hours before landfall, Sandy had tropical storm-force winds that covered an area nearly one-fifth the area of the contiguous U.S. Sandy's area of ocean with twelve-foot seas peaked at 1.4 million square miles—nearly one-half the area of the contiguous U.S., or 1 percent of Earth's total ocean area. Most incredibly, ten hours before landfall (9:30 a.m. EDT Oct. 29), the total energy of Sandy's winds of tropical storm-force and higher peaked at 329 terajoules—the highest value for any Atlantic hurricane since at least 1969, and equivalent to five Hiroshima-sized atomic bombs.

Sandy made landfall near Atlantic City, NJ on Oct. 29, with sustained winds of 80 mph and a central minimum pressure of 946 mb—the lowest pressure on record along the Northeast coast. The Battery, in New York City Harbor, had an observed water level of 13.88 feet, besting the previous record set by Hurricane Donna in 1960 by 3 feet. Sandy also brought torrential rainfall to the Mid-Atlantic, with more than 12 inches of rain observed in parts of Maryland.

In addition, Sandy generated blizzard conditions for the central and southern Appalachians with more than a foot of snow falling in six states from North Carolina to Pennsylvania, shattering October snow records. More than 130 fatalities were reported and more than 8.5 million customers lost power—the second largest weather-related power outage in U.S. history, behind the 10 million that lost power during the Blizzard of 1993. Damage from Sandy is estimated at $62 billion.

2. Warmest Year on Record
Spring, March, July and the annual temperature were all warmest on record in the contiguous U.S. July was the warmest month of any month in the 1,400+ months of the U.S. data record, going back to 1895. The spring temperature departure from average was the largest on record for any season, and March temperatures had the second largest warm departure from average of any month in U.S. history. All-time hottest temperature records were set over approximately 7 over of the area of the contiguous U.S., according to a database of 298 major U.S. cities maintained by wunderground's weather historian, Christopher C. Burt. Given the very warm December temperatures so far, the final 2012 annual temperature is likely to break the previous warmest year on record (1998) by at least 0.7°F—a colossal margin to break an annual record by. It is likely that 15 states will end up with their warmest year on record in 2012, and 42 states will have a top-ten warmest year.

One of 2012's incredibly hot days: high temperatures on August 1 in Oklahoma from the Oklahoma Mesonet. It was the hottest day in Oklahoma since August 1936, with more than half of the state recording temperatures of 110° or higher. Oklahoma City hit 112°, tied for the city's 3nd highest temperature since record keeping began in 1890. The only hotter days occurred two days later—on August 3, 2012—and back on August 11, 1936 (113°.)

3. The Great Drought of 2012
The Great U.S. Drought of 2012 may well turn out to be the biggest weather story of 2012, since its full impacts have not yet been realized. The area of the contiguous U.S. in moderate or greater drought peaked at 61.8 percent in July—the largest such area since the Dust Bowl drought of December 1939. The heat and dryness resulted in record or near-record evaporation rates, causing major impact on corn, soybean and wheat belts in addition to livestock production. Drought upstream of the Lower Mississippi River caused record and near-record low stream flows along the river in Mississippi and Louisiana, resulting in limited river transportation and commerce. Crop damages alone from the great drought are estimated at $35 billion. As the total scope of losses is realized across all lines of business in coming months, this number will climb significantly.

Corn in Colby, Kansas withers in the Great Drought of 2012 on May 27. Image credit: Wunderphotographer treeman.

5. March 2 - 3 Tornado Outbreak
A massive tornado outbreak of stunning violence swept through the nation's midsection March 2 - 3, spawning deadly tornadoes that killed 41 people. Hardest hit were Kentucky and Southern Indiana, which suffered 22 and 13 dead, respectively. The scale of the outbreak was exceptional, with 70 tornadoes touching down in eleven states, from southern Ohio to southern Georgia. At one point, 31 separate tornado warnings were in effect during the outbreak. An area larger than Nebraska—81,000 square miles—received tornado warnings, and tornado watches were posted for 300,000 square miles—an area larger than Texas. The outbreak spawned two EF-4 tornadoes, one which devastated Henryville, Indiana, and another that plowed through Crittenden, Kentucky. Total damage was estimated at $4 billion.

6. June 29 Multi-State Derecho
A violent line of organized severe thunderstorms called a derecho swept across the U.S. from Illinois to Virginia on June 29, damaging houses, toppling trees, bringing down power lines. The storms killed 22 people, and left at least 3.4 million customers without power. The thunderstorms in a derecho (from the Spanish phrase for "straight ahead") create violent winds that blow in a straight line. The derecho was unusually intense due to extreme heat that set all-time records at ten major cities on the south side of the derecho. This heat helped create an unstable atmosphere with plenty of energy to fuel severe thunderstorms. At least 38 thunderstorms in the derecho generated wind gusts in excess of hurricane force, making the derecho one of the most severe derechoes on record. Total damage was estimated at $3.75 billion.

7. Hurricane Isaac
Hurricane Isaac slowly lumbered ashore near the mouth of the Mississippi River on August 28 as a Category 1 Hurricane with 80 mph winds. Isaac's large size and slow motion caused a storm surge more characteristic of a Category 2 hurricane—up to eleven feet—but New Orleans' new $14.5 billion levee upgrade held against Isaac's surge. The surge moved up the Mississippi River in Plaquemines Parish near Port Sulphur, causing overtopping of the levees and flooding of homes in the mandatory evacuation areas behind the levees. These levees were not part of the $14.5 billion levee upgrade. Isaac brought torrential rainfall, with more than twenty inches observed in some areas of New Orleans. Isaac also provided some drought relief to the Lower Mississippi and Ohio Valleys. Isaac dumped up to 18" of rain in Florida, and disrupted the 2012 Republican Convention in Tampa. Isaac did $2 billion in damage.

Tropical Storm Isaac on Aug. 28, a few hours before it intensified into a hurricane.

8. The Non-Winter of 2011-2012
"Flowers are sprouting in January in New Hampshire, the Sierra Mountains in California are nearly snow-free, and lakes in much of Michigan still have not frozen. It's 2012, and the new year is ringing in another ridiculously wacky winter for the U.S. In Fargo, North Dakota yesterday, the mercury soared to 55°F, breaking a 1908 record for warmest January day in recorded history. More than 99 percent of North Dakota had no snow on the ground this morning, and more than 95 percent of the country that normally has snow at this time of year had below-average snow cover."

That was the opening of my Jan. 6, 2012 blog post Remarkably dry and warm winter due to record extreme jet stream configuration. The contiguous U.S. saw its third lowest snow cover on record during both winter and spring, and the winter of 2011 - 2012 was the fourth warmest and 24th driest winter in U.S. history, going back to 1895. A primary cause of this warm and snowless winter was the most extreme configuration of the jet stream ever recorded, as measured by the North Atlantic Oscillation (NAO). The NAO index was +2.52 in December 2011, which was the most extreme difference in pressure between Iceland and the Azores ever observed in December (records of the NAO go back to 1865.) The positive NAO conditions caused the Icelandic Low to draw a strong south-westerly flow of air over eastern North America, preventing Arctic air from plunging southward over the U.S.

10. Late-Spring Freeze: Northeast/Midwest
After the record-warm "Summer in March" weather in the Great Lakes and Northeast, an April freeze damaged crops across the region. New York's fruit production was the lowest since 1948, and it was the worst fruit season for Michigan since 1945. Damage in Michigan alone was estimated at $500 million.

Severe Weather Outbreak (May):
A strong cold front moving through the country on May 25 - 30 spawned 27 tornadoes from Texas to the Northeast. Damage was estimated at $2.5 billion, much of it from hail.

Severe Weather Outbreak (April):
A tornado outbreak on April 13 - 14 in the Plains spawned 98 tornadoes and caused at least 6 fatalities. Damage was estimated at $1.75 billion.

Duluth Flooding (June):
Training thunderstorms caused record flooding in and around Duluth Minnesota on June 20, with over 8 inches of rainfall observed in 24 hours in parts of the city. Two rivers in the Duluth area, the Nemadji and St. Louis, reported their highest flood heights on record. Damage was estimated at $175 million.

Near-Record Low Great Lakes Levels (by end of 2012):
Record warm temperatures throughout 2012 combined with low precipitation and low winter ice cover created high evaporation rates across the Great Lakes. In December, Lakes Michigan and Huron had fallen to within inches of the all-time record low lake levels set back in 1964. Low lake levels have a significant impact on recreational and commercial boating as well as tourism.

Mount Evans Tornado (July):
A high elevation tornado was observed along the slope of Mount Evans at 11,900 feet--the second highest observed tornado in the U.S.

Alaskan Storms and Flooding (September):
Several large extratropical cyclones impacted Alaska during September. Significant flooding occurred along the Sustina River and along its tributaries, causing the worse flooding in 30 years. More than 800 structures and dozens of homes were damaged or destroyed. The storms also brought early snowfall to southern portions of the state.