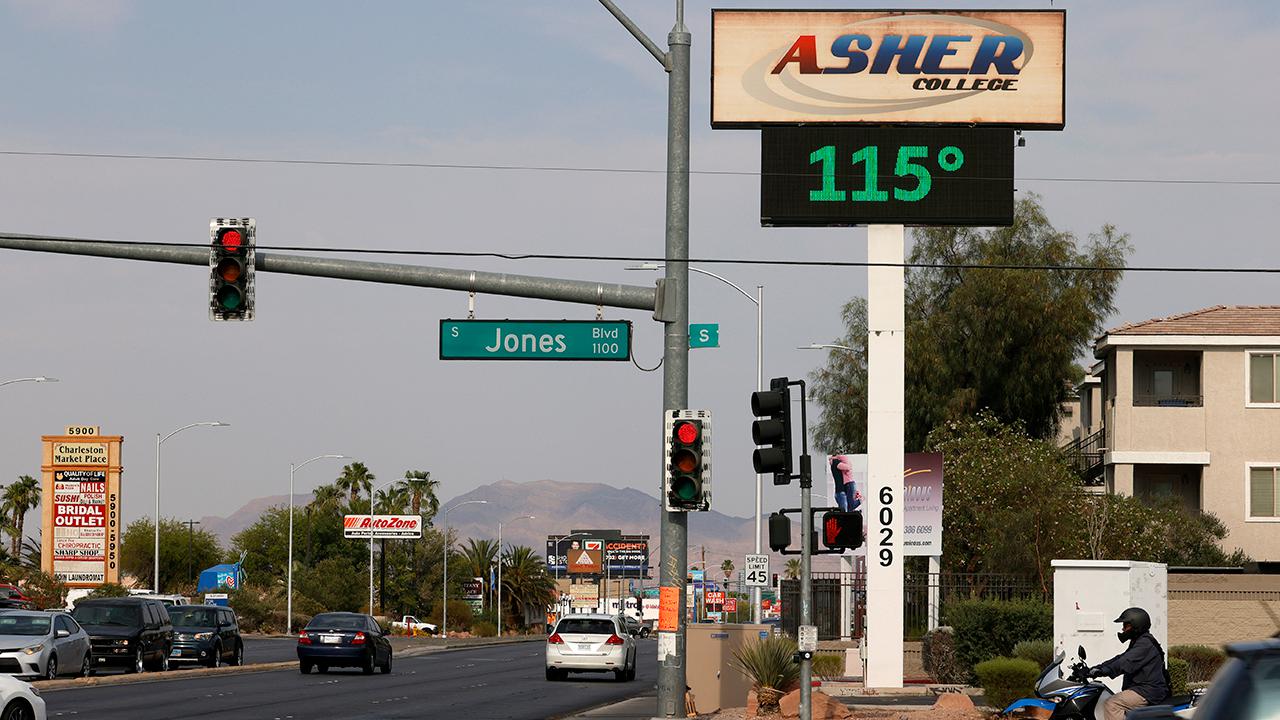 Summer isn’t even half over, and we’ve seen heat waves in the Pacific Northwest and Canada with temperatures that would be hot for Death Valley, enormous fires that have sent smoke across North America, and lethal floods of biblical proportions in Germany and China. Scientists have warned for over 50 years about increases in extreme events arising from subtle changes in average climate, but many people have been shocked by the ferocity of recent weather disasters.

A couple of things are important to understand about climate change’s role in extreme weather like this.

First, humans have pumped so much carbon dioxide and other planet-warming greenhouse gases into the atmosphere that what’s “normal” has shifted. A new study, published July 26, 2021, for example, shows how record-shattering, long-lasting heat waves – those that break records by a wide margin – are growing increasingly likely, and that the rate of global warming is connected with the increasing chances of these heat extremes.

Second, not every extreme weather event is connected to global warming.

Like so many things, temperature statistics follow a bell curve – mathematicians call these “normal distributions.” The most frequent and likely temperatures are near the average, and values farther from the average quickly become much less likely.

All else being equal, a little bit of warming shifts the bell to the right – toward higher temperatures. Even a shift of just a few degrees makes the really unlikely temperatures in the extreme “tail” of the bell happen dramatically more often.

The stream of broken temperature records in the North American West lately is a great example. Portland hit 116 degrees – 9 degrees above its record before the heat wave. That would be an extreme at the end of the tail. One study determined the heat wave would have been “virtually impossible” without human-caused climate change. Extreme heat waves that were once ridiculously improbable are on their way to becoming more commonplace, and unimaginable events are becoming possible.

The width of the bell curve is measured by its standard deviation. About two-thirds of all values fall within one standard deviation of the average. Based on historical temperature records, the heat wave in 2003 that killed more than 70,000 people in Europe was five standard deviations above the mean, so it was a 1 in 1 million event.

Without eliminating emissions from fossil fuels, studies have found that heat like that is likely to happen a few times a decade by the time today’s toddlers are retirees.

So, Is Climate Change to Blame?

There’s a basic hierarchy of the extreme events that scientific research so far has shown are most affected by human-caused climate change.

At the top of the list are extreme events like heat waves that are certain to be influenced by global warming. In these, three lines of evidence converge: observations, physics and computer model simulations that predict and explain the changes. At the bottom of the list are things that might plausibly be caused by rising levels of greenhouse gases but for which the evidence is not yet convincing. Here’s a partial list.

1. Heat waves: Studies show these are certain to increase dramatically with global warming, and indeed that’s exactly what we’re observing. 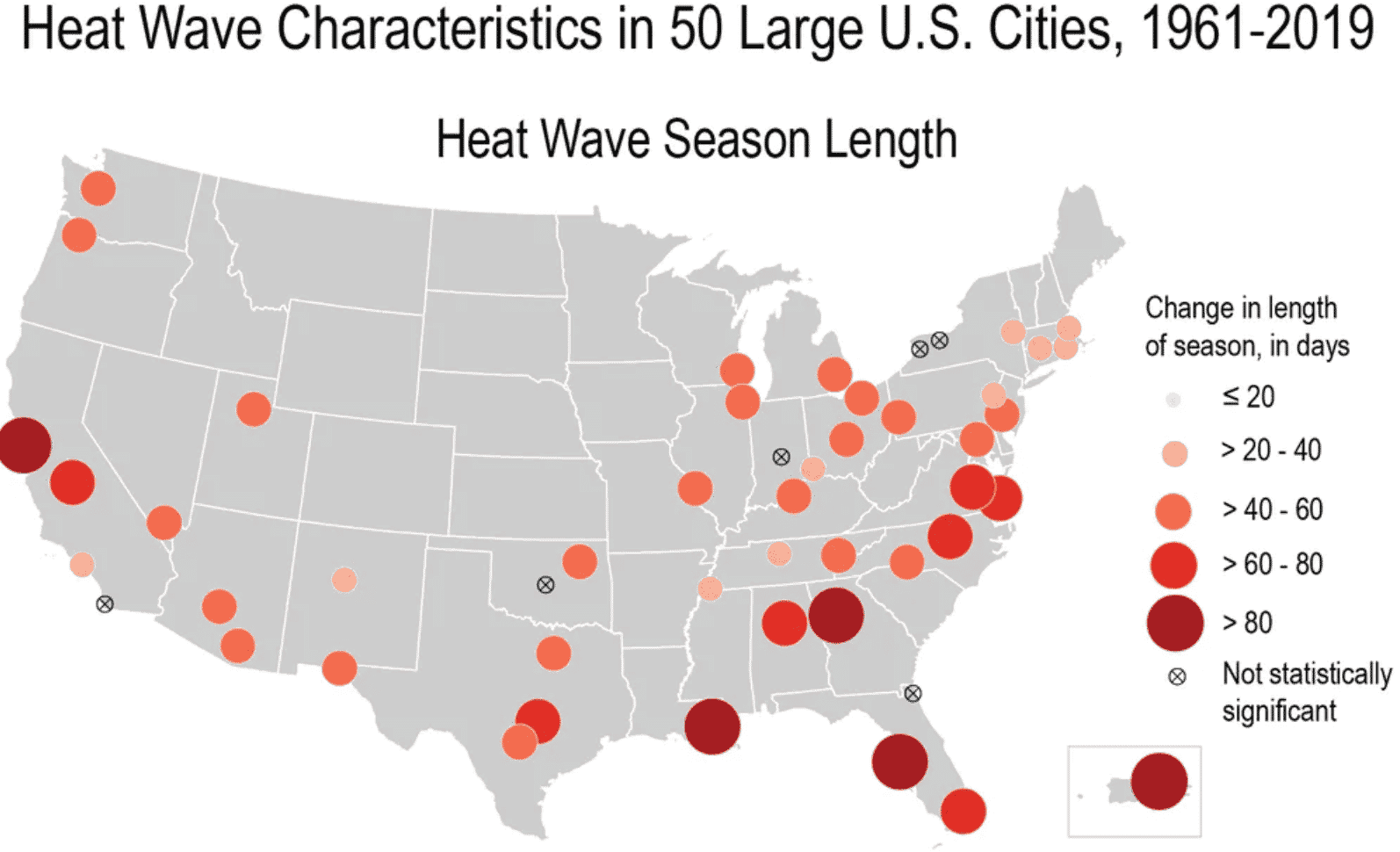 The hot season is getting a lot longer in some places. Michael Kolian / U.S. Global Change Research Program

2. Coastal flooding: Heat is causing ocean waters to expand, pushing up sea levels, and melting ice sheets around the world. Both high-tide flooding and catastrophic storm surge will become much more frequent as those events start from a higher average level because of sea level rise.

3. Drought: Warmer air evaporates more water from reservoirs, crops and forests, so drought will increase because of increased water demand, even though changes in rainfall vary and are hard to predict.

4. Wildfires: As the western U.S. and Canada are seeing, heat dries out the soils and vegetation, providing drier fuel that’s ready to burn. Forests lose more water during hotter summers, and fire seasons are getting longer.

5. Reduced spring snowpack: Snow starts accumulating later in the fall as temperatures rise, more water is lost from the snowpack during winter, and the snow melts earlier in the spring, reducing the flush of water into reservoirs that supports the economies of semiarid regions.

6. Very heavy rainfall: Warmer air can transport more water vapor. Damaging rainstorms are due to strong updrafts that cool the air and condense the vapor as rainfall. The more water is in the air during a strong updraft, the more rain can fall.

7. Hurricanes and tropical storms: These derive their energy from evaporation from the warm sea surface. As oceans warm, larger regions can spawn these storms and provide more energy. But changes in winds aloft are expected to reduce hurricane intensification, so it’s not clear that global warming will increase damage from tropical storms.

8. Extreme cold weather: Some research has attributed cold weather that dips south with the meandering of the jet stream – sometimes referred to as “polar vortex” outbreaks – to warming in the Arctic. Other studies strongly dispute that Arctic warming is likely to affect winter weather farther south, and this idea remains controversial.

9. Severe thunderstorms, hail and tornadoes: These storms are triggered by strong surface heating, so it’s plausible that they could increase in a warming world. But their development depends on the circumstances of each storm. There is not yet evidence that the frequency of tornadoes is increasing.

In the new heat wave study, Erich Fischer and colleagues at the Swiss Institute for Atmosphere and Climate Science looked at the frequency of weeklong heat waves that don’t just push the envelope of previous climate, they shatter records by huge margins. The scientists analyzed thousands of years of climate simulations to identify unprecedented heat events and found that global warming caused by coal, oil and gas was commonly associated with such events. In models, these record-shattering weeklong heat waves don’t just gradually increase with global warming but instead strike without warning.

The researchers showed that record-shattering heat is much more likely than it was a generation ago, and that these devastating events will occur much more often over the next few decades. Critically, they found that the likelihood of these unprecedented heat waves is associated with the rate of warming – and that their likelihood decreases markedly when fossil fuel emissions fall.

A Warning That Can’t Be Ignored

The catastrophic impacts of extreme weather depend at least as much on people as on climate.

The evidence is clear that the more coal, oil and gas are burned, the more the world will warm, and the more likely it will be for any given location to experience heat waves that are far outside anything they’ve experienced.

Scott Denning is a professor of Atmospheric Science at Colorado State University.

Disclosure statement: Scott Denning has received funding from NASA, NOAA, the US Department of Energy, and the National Science Foundation.