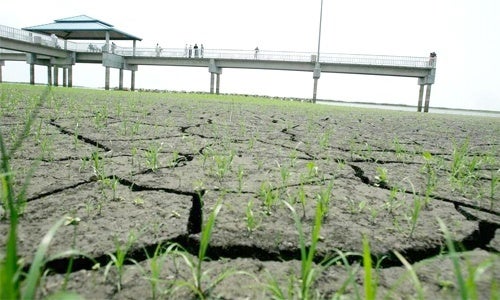 While the drought in California grabs headlines across the country, other places around the U.S. and the world are experiencing brutal droughts. It’s well known that much of the Western U.S. is in some level of a drought—parts of Nevada, Oregon, Washington, Idaho and Montana are all experiencing severe to exceptional drought. But little attention has been paid to the drought gripping South Florida. 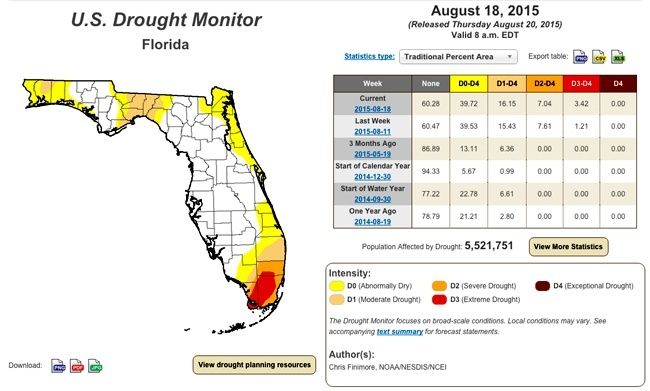 Much of South Florida is in severe to extreme drought. Photo credit: U.S. Drought Monitor

While it has not been languishing for four years like the state of California, South Florida is in the midst of a severe to extreme drought, according to the latest data from the U.S. Drought Monitor. And South Florida happens to be home to a whole lot of people—the drought there is affecting more than 5.5 million.

South Florida’s tropical savanna climate has two distinct seasons: wet and dry. The dry season is considered to be roughly from November to April and makes up for about 25 percent of yearly rainfall. That means three-quarters of South Florida’s rainfall arrives between May and October, and to date, many areas are recording 10 to 16 inches below normal with North Perry Airport recording a whopping 20 inches below normal as of Aug. 20. Rainfall that low has resulted in the driest wet season on record for North Perry along with Fort Lauderdale and Tamiami. And almost every other area in South Florida is having one of its driest wet seasons on record.

In addition to a lack of rainfall, “fresh water usage has been a big factor” in South Florida’s drought, reports The Washington Post. “Agricultural irrigation, commercial and residential needs place demands on the region’s fresh water supply, both in lakes and in the subterranean aquifers,” said The Post.

Far too much of the freshwater that is available is polluted from farm runoff. The South Florida Water Management District board applauded farmers earlier this month for reducing phosphorus pollution again this year, but environmentalists were quick to point out that due to water quality restrictions the water could not go to the southern Everglades, where the water is desperately needed.