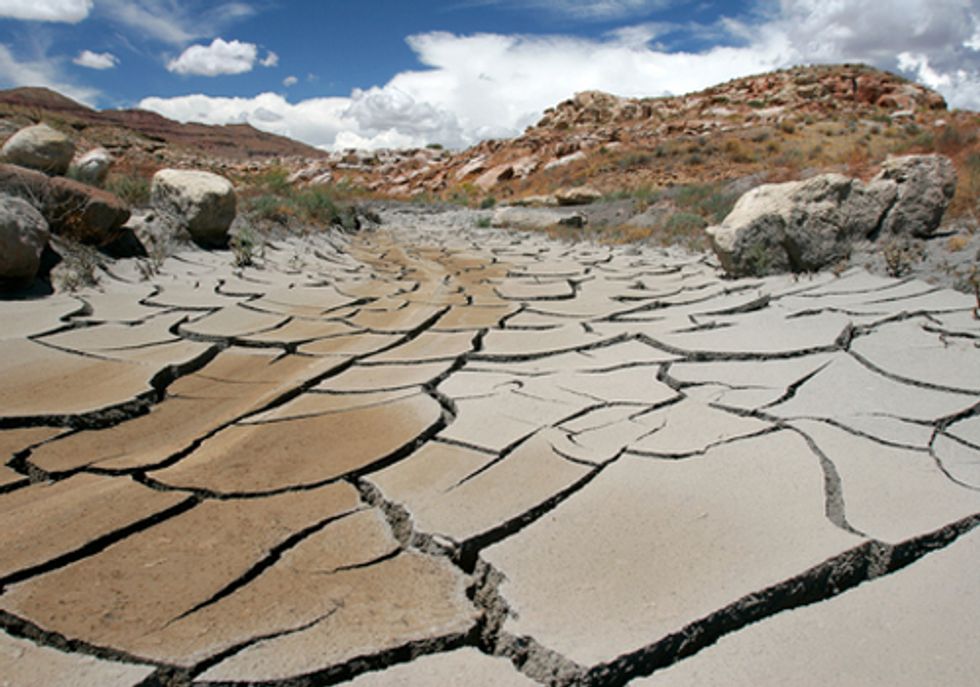 A dried river in Arizona. Photo courtesy of Shutterstock.

Findings from a new scientific study indicate a major carbon release from the extreme turn-of-the-century drought in western North America—the worst of the last millennium—with likelihood of even drier times ahead.

The study, titled Reduction in Carbon Uptake During Turn of the Century Drought in Western North America, published this week in Nature-Geoscience, was conducted by a team of researchers led by Christopher Schwalm, assistant research professor for Northern Arizona University's (NAU) School of Earth Sciences and Sustainability.

The scientists found a major drought that struck western North America in 2000 to 2004 significantly reduced carbon uptake and stressed the region’s water resources.

The study illustrates the impact of the drought as seen in reduced precipitation, decreased soil moisture, reduced river flows and lower crop yields. It also poses the question of how common such an extreme event might be in the future.

“To our surprise, the drought, which was severe with respect to recent and past conditions, is forecasted to become the wetter end of a new climatology,” Schwalm said. “And it would make the 21st century climate akin to mega-droughts of the last millennium.”

He said the severity of this widespread five-year drought, the worst of its kind over the past 800 years, inhibited carbon uptake, essentially contributing to global warming conditions.

And climate models demonstrate a continuing trend toward a warmer planet. Global circulation patterns are expected to shift in a way that would create drier conditions across western North America, expanding the region that is already chronically dry and making today’s drought conditions the new normal.

"At this point, our concerns go beyond carbon uptake,” Schwalm said. “We have to start looking at water resources, especially in parts of North America that already are dealing with water shortages.”

The study was based on analysis of data from NASA satellite remote sensing products and a suite of ground-based monitoring stations that directly measure carbon uptake and release. Data from the monitoring stations are assembled by a global community of scientists participating in FLUXNET, a network of micrometeorological tower sites that measure carbon, water and energy exchanges. The instruments help to monitor plant productivity, evapotranspiration, and carbon and water budgets.

The study was funded by a grant from the National Science Foundation.