I Committed Civil Disobedience by Blocking Oil Trains in Portland, Oregon — and Won 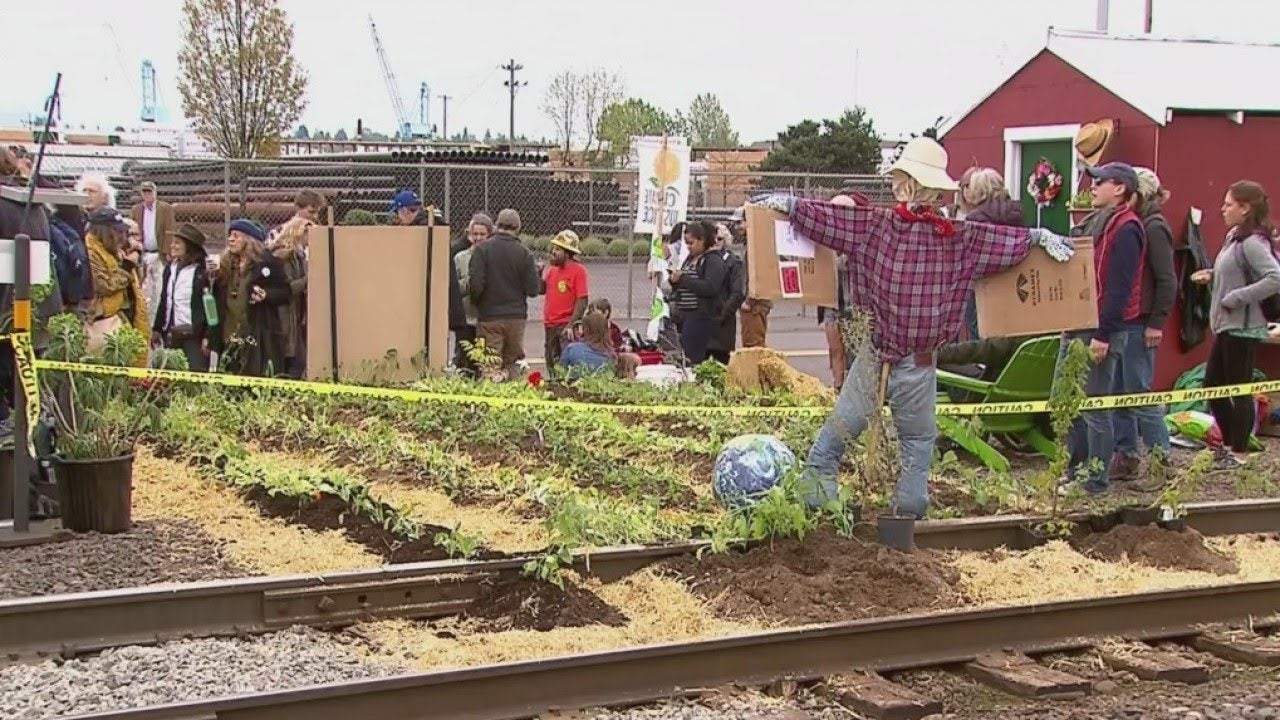 A few weeks ago, I showed the world that I am not a criminal, despite having been arrested and charged with first-degree criminal trespass. In a five to one vote, a Multnomah County, Oregon, jury refused to convict me and four fellow activists in our historic trial for blocking tar sands oil trains entering Portland.

A week later, the Multnomah County District Attorney dismissed our case. The dismissal offers an implicit admission that with consciousness of the climate crisis growing every day, prosecutors here would not be able to secure a conviction of people who engage in civil disobedience on behalf of the planet.

Here’s the background to this victory. Last April, on Easter Sunday morning, along with other members of Extinction Rebellion, I helped build a garden on the railroad tracks at the Zenith Energy Export Terminal, blocking the processing of trains carrying tar sands crude oil for export. As I sat on the tracks with my friends that day, I thought about my grandchildren’s future, a future that has been made uncertain by the existential threat of the climate crisis. Thirty-four hours later we were arrested by Portland Police and charged with criminal trespass in the second degree.

A week later, we came back and did it again. This time, the police charged us with criminal trespass in the first degree.

Five of us pled not guilty “by reason of necessity.” With the help of our legal team and the Civil Liberties Defense Center, we presented a “choice of evils” defense to a jury.

The first hint that the prosecution was going to have trouble convicting us came during the voir dire portion of jury selection. In questioning, each of the 35 prospective jurors acknowledged that climate change is real, is human-caused, and is serious. Several members of the jury pool said that they would be unable to convict anyone for civil disobedience on behalf of the planet.

Once our jury was seated, we argued that we were obliged to break the law in an effort to prevent the greater evil of climate catastrophe. The judge allowed three days of extensive testimony from the five defendants, along with expert witnesses. Jury deliberation took almost a full day, at the end of which, the jury announced it was deadlocked, and the judge declared a mistrial. Later we learned that five members of the six-person jury voted for acquittal.

Actions like ours are the only tactic that we — everyday people — have left to address the climate crisis. We have lobbied our elected officials, organized demonstrations, and supported litigation, all to no avail. Even our few wins have turned out to be short-lived.

We worked tirelessly to push the city of Portland to adopt a ban on the creation or expansion of new fossil fuel infrastructure within city limits. This organizing was victorious when, in 2016, Portland’s city council adopted the Fossil Fuel Terminal Zoning Amendments. But the fossil fuel industry has continued to challenge the law and expand in our city. And using an old construction permit, Zenith Energy flouts community sentiment and the city’s intent and has almost quadrupled its capacity, from 12 to 44 rail cars at a time.

To make things worse, much of the crude oil that Zenith processes is Alberta tar sands oil, perhaps the most dangerous and dirtiest fossil fuel on the planet. In 2018, Zenith “flipped” an old, run-down site and increased crude oil exports from a value of ,532 a year to million in 2018. Portlanders were outraged, yet city officials claimed they could not stop this expansion.

In the face of this grave injustice, we must ask ourselves, who are the real criminals here? Me — a mother, grandmother, and retired teacher, who sat on railroad tracks? Or Zenith Energy, the Texas corporation subverting our local democracy and putting our city and climate at risk?

In 2019, 9,167 rail cars came to Zenith, according to the Oregon Department of Transportation. That’s more than three times the 2,836 cars that came in 2018. With an industry standard of 90-100 oil-filled cars per train, that’s more than 90 trains a year — almost two per week. And with each train carrying as much as 70,000 barrels of oil, that amounts to 6.3 million barrels of crude oil a year. Consumption of that oil is the equivalent of 2.7 million metric tons of carbon dioxide spewing into our atmosphere, the same as 583,000-plus cars driving for over a year. And that is just from combustion, without accounting for the much larger emissions from tar sands oil or its full life cycle. To me and my co-defendants, Zenith’s contributions to the climate crisis are a crime against humanity.

If we want to ensure a future for our children and grandchildren, companies like Zenith must be stopped.

The strategy of mass civil disobedience is the most effective tactic that we can use. When all legal methods of change have been tried and proven ineffective — a mass movement of non-cooperation that shuts down business-as-usual is the only choice that we have left.

I used to tell my kids: “When you are in a hole, the best thing to do is to stop digging.” Yet, it seems that our leaders are unwilling or unable to drop the shovel. It has fallen upon us to tear that shovel from their hands.

I urge you to join us.