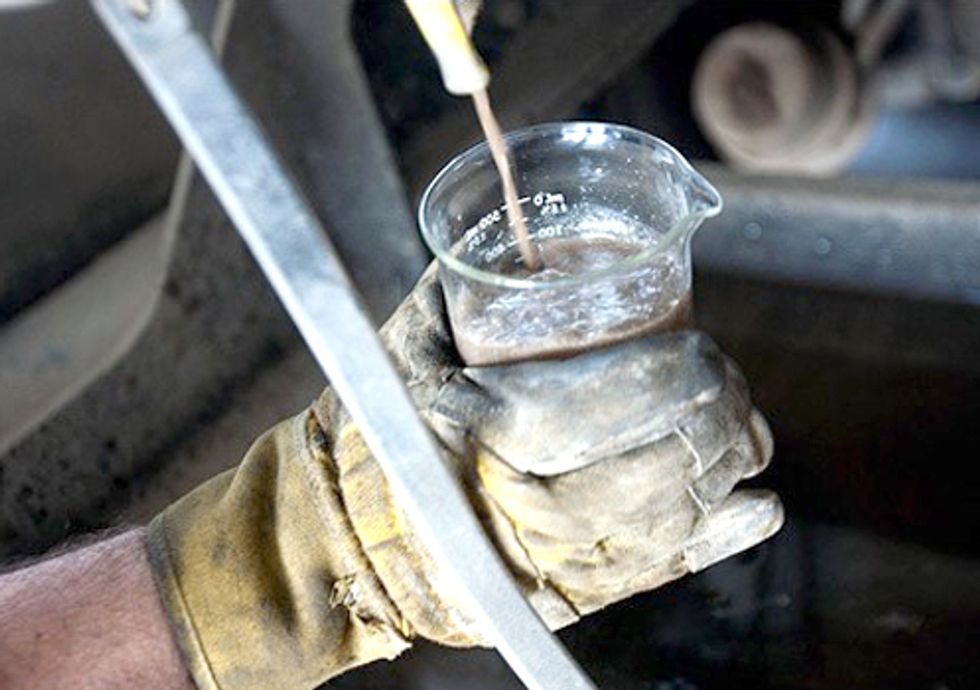 By Mackenzie Schoonmaker and Mike Dulong

Every time the gas industry fracks, the public loses. We forfeit an enormous amount of fresh water from our rivers, lakes and streams, and we get a toxic waste disposal nightmare in return.

Rather than acknowledge these losses and work toward real solutions, the gas industry consistently sidesteps these issues, and falsely claims to have fixed them.  Recently, Chesapeake Energy CEO Aubrey McClendon told us: “We heard that we were using too much water, so today we recycle 90% to 100%.” He later stated: “Then you talk about water consumption, and we start to recycle 99%.” Unfortunately, like so many of the industry’s empty promises, this story is not consistent with the reality of how much water the gas industry uses and how much waste it generates.

First, most of the chemically-laced water used for fracking (as much as 85 percent according to Pro Publica reports; other estimates range from 10 to 40 percent), does not return to the surface. Rather, it stays underground, where it can potentially migrate to and pollute fresh water supplies (another serious problem that deserves further discussion). Thus, recycling does not significantly change the amount of fresh water needed to frack a well.

In 2010, the U.S. Environmental Protection Agency (EPA) estimated that 70 to 140 billion gallons of water may be needed to fracture 35,000 wells in the U.S. each year.  This is equivalent to the total amount of water used each year in roughly 40 to 80 cities with a population of 50,000 or about 1 to 2 cities of 2.5 million people.  These huge amounts are consumed because approximately 2 to 8 million gallons of water is needed just to frack a single well, which means, assuming only 15 percent flows back, as much as 6.8 million gallons are lost with each fracture.

Significantly, even with recycling, the waste fluid that flows back will never be returned in any meaningful way to the aquifers, rivers, lakes and streams from which it was taken. The “recycled” fluid is used by the gas industry for more fracking.

Moreover, given the number of Chesapeake’s active wells versus its recycling capacity, it is unlikely that Chesapeake can ever live up to its promise of recycling 99 percent of the waste fluid that fracking generates. Chesapeake has not made public the precise percentage of waste it recycles, but last year, the NY Times reported that the overall gas industry in Pennsylvania recycled less than half its waste fluid. Chesapeake now has 216 wells active in Pennsylvania, for which it needs over a billion gallons of water to operate. Chesapeake has an “Aqua Renew” program, which claims to filter and reuse only about 10 million gallons of fluid per month in the Marcellus Shale. That amounts to the flow back from less than approximately 10 wells each month. Likewise, Chesapeake just opened its first and only liquid waste recycling facility in Ohio’s Utica Shale, which, when in full swing, recycles approximately 5 million gallons of fluid per month, less than the flowback from roughly 5 wells.

And, where recycling water does lessen the volume of waste to be disposed of, it generates an additional set of disposal headaches. The “recycling” is more like distillation and it leaves behind highly radioactive and toxic sludge or salts that can be dangerous to people and aquatic life if they get into waterways. Current industry practice is to send this radioactive sludge to landfills, where it will continue to be a toxic menace to the community long after the natural gas has dried up. Other industries would have to ship this radioactive refuse to Idaho or Washington state, at great expense, where there are some of the only landfills permitted to accept such waste. However, since this oil and gas waste is exempt from federal hazardous waste law, gas drillers take advantage of a cheap option—the local landfill. Again, the gas industry wins, and the public loses.

At any rate, contrary to McClendon’s claims, it appears most of the waste fluid is not being recycled. Right now, there are only two other options to dispose of this fluid—ship it to a wastewater treatment plant or an underground injection well. Although, in theory, both sound like viable options, the devil is in the details.

The second disposal option, underground injection wells, has revealed its own set of problems. This process, which involves injecting the wastewater into the earth under extreme pressure, has been linked to earthquakes in Ohio, Arkansas, West Virginia and Texas. An underground injection well in Youngstown, Ohio, was recently shut down for study after the area experienced a 4.0 earthquake. The earthquake problem is symptomatic of the unregulated gas industry; since gas drillers are exempt from key provisions of federal hazardous waste law, they are also exempt from the earthquake prevention rules typically applicable to underground fluid injections. To compound matters, disposing of the fracking waste from New York and Pennsylvania requires trucking it potentially long distances to underground injection wells in other states, severely increasing the risk of potentially disastrous accidents or spills.

Even worse, some states permit the extremely salty and potentially radioactive brine that is a toxic byproduct of fracking, to be spread on our roads. New York currently allows brine from conventional drilling to be spread on the road as a de-icer and dust suppressant. It has left the door open to spreading brine from high-volume fracking with more data—a practice which Pennsylvania currently allows via a general permit.

What we need now is for our governments—federal and state—to make the industry face its water and waste problems head on. EPA announced last fall that it will develop standards for sending fracking waste to wastewater treatment plants, but it does not plan to release these measures until 2014. New York State has refused to address this issue all together, and has put forth no plan for dealing with the billions of gallons of waste that will be generated if it allows high-volume fracking to move forward.

Until we start a serious conversation on this issue, the gas companies will continue to sweep billions of gallons of toxic, radioactive waste under the carpet. And we’ll be left to clean up the mess, long after they have moved on.