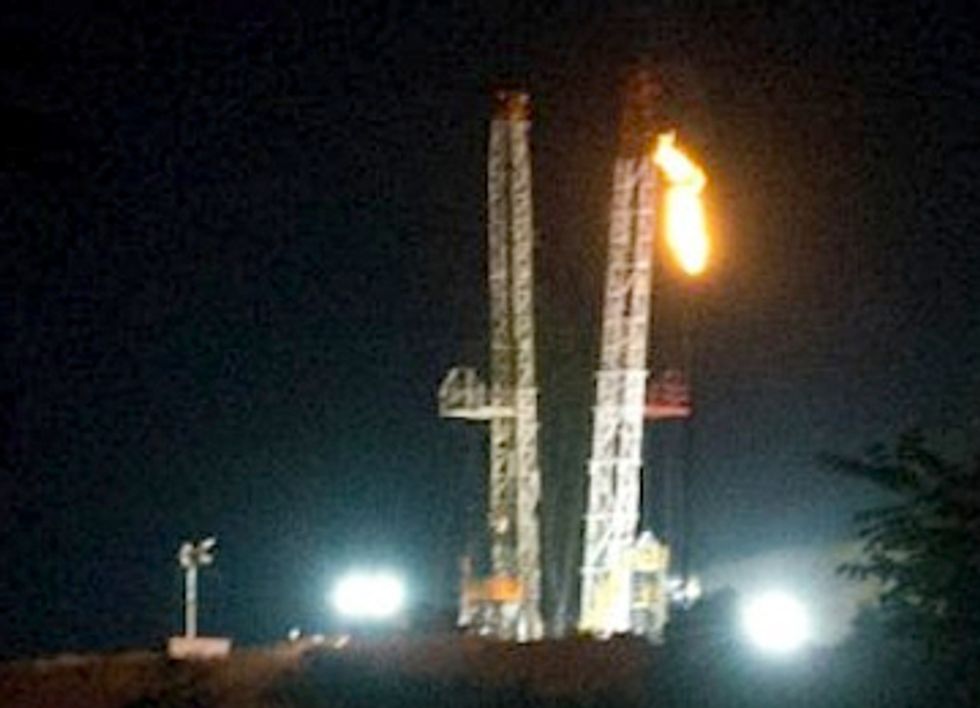 The view from the Pitcocks' yard of the well flaring gas from the well pad where the explosion occurred on July 7. Photo credit: Tara Lohan/ Meghan Nesbit

Pitcock and his wife Diane moved with their sons from the Baltimore, MD, area to rural New Milton, WV, in Doddridge County nearly a decade ago to enjoy a quiet country life.

The Pitcocks have been plagued by noise, lights, dust, emissions and truck traffic after a neighbor leased his land to a drilling company, which has erected several well pads on the land adjacent to their property. Over the last year trees have been clear cut, miles of roads built through their rural neighborhood, and drilling has begun. On Friday, July 5, I visited their home and witnessed gas being flared from a well through the night—the light illuminated their front yard from a ridge top about 2,000 feet away.

John Pitcock reported that the well continued to flare through the next day and night and another well beside it was loudly venting gas on and off. What became a nuisance turned to a real fright during the early morning hours of Sunday as John describes:

The Pitcocks were initially told (after driving off their property to find employees working nearby and emergency response officials) that they needed to evacuate, but were later told it was optional and they could remain.

Since then conflicting reports have emerged about the number of workers injured and the severity of their injuries at the well pad, which is officially called the Hinterer 2H well on the Ruddy Alt pad and is operated by Antero Resources. The West Virginia Gazette-Mail reported at least seven injured and four or five workers were flown to West Penn Burn Center in Pittsburgh.

The West Virginia Department of Environmental Protection (DEP) and the Doddridge County director of emergency services did not return phone calls as of publication. While the cause of the fire hasn’t been determined, writing for the Gazette-Mail, David Gutman explained that this is not the first safety issue that Antero has had recently:

John Pitcock says that he doesn’t think companies should be drilling in this manner in proximity to people’s homes.