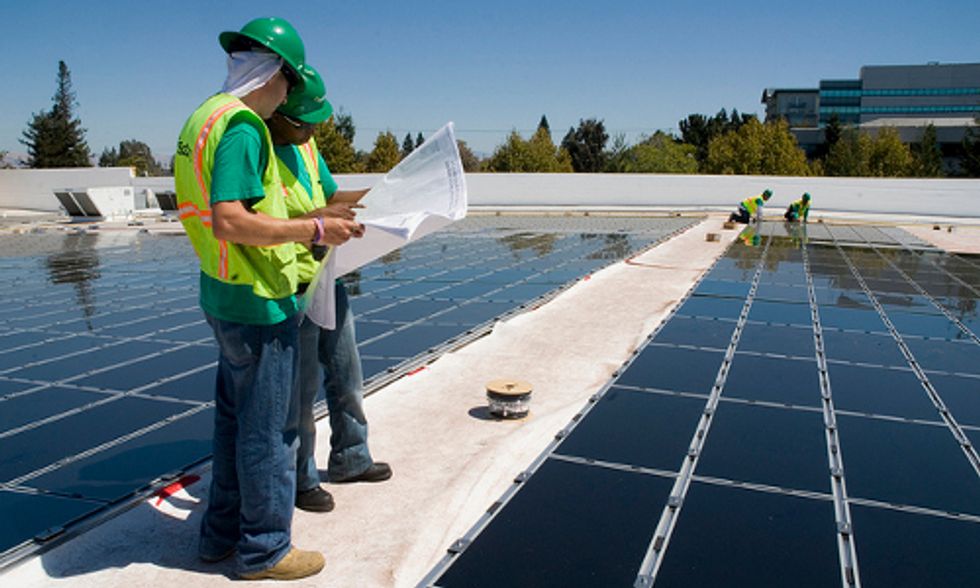 Walmart is installing solar power generating systems in several locations in California and Arizona, as seen on this Mountain View, CA store, where President Obama announced the commitments today.

Talk about the perfect Mother’s Day present for Mother Earth.

President Obama announced at the Walmart in California that 300 leading U.S. companies have taken the “solar pledge,” committing to install nearly 1 gigawatt (GW) of new solar as part of their business plans. That’s an astonishingly huge increase in the use of solar in the commercial sector.

For America’s solar energy industry, this is like getting a triple-A investment rating from Moody’s or Standard and Poor’s. Solar has become a "street-smart" investment. These companies are expanding their use of solar because it makes sense from both a business and social responsibility viewpoint. Having worked closely with both the Administration and the private sector to increase the use of clean, reliable solar nationwide, Solar Energy Industries Association applauds this exciting, new initiative and we look forward to assisting commercial businesses, homebuilders, rural coops, governmental entities and America’s financial community in bringing these new solar installations online.

This bold initiative is part of a solar boom in America which is already taking place. Today, more than 30 utility-scale, clean energy projects are under construction, putting thousands of electricians, steelworkers and laborers to work, while helping to reduce dangerous carbon emissions. These facilities, along with rooftop solar on homes, businesses and schools, will help to generate clean, abundant energy for generations to come. What’s more, innovative solar heating and cooling systems are offering American consumers, businesses and schools cost-efficient, effective options for meeting their energy needs, in addition to reducing our nation’s overall energy consumption.

Clearly, the President sees solar as a critical technology for addressing climate change, and his speech today created a direct link between our need to address climate change and the positive impact that solar can have on reducing pollution. Here’s a breakdown on the commitments announced today:

Solar offers real hope for the future. Smart public policies, like the solar Investment Tax Credit, have helped to create 143,000 American jobs in the solar industry, pumped tens of billions of dollars into the U.S. economy, spurred private sector innovation and investment, and helped to fight climate change. They’ve also helped to make solar the fastest-growing source of renewable energy in America. But there’s even more we can do as an industry. Minor changes in federal contracting and Treasury regulations would allow solar to compete as a low-cost alternative on federal buildings, saving millions of dollars for taxpayers and putting even more Americans to work. We look forward to working with the President and Congress on a critically-needed, long-term energy policy, which will help to ensure future prosperity for America.