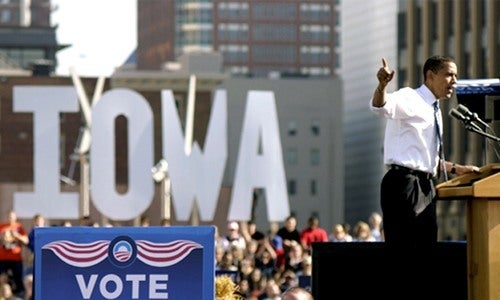 In a little under a week, Iowa caucus goers will gather in small rooms across the state and talk amongst themselves to select the next leader of the free world. With warnings of terrorist attacks around the globe and talk of a possible economic downturn amidst growing inequity, the stakes couldn’t be higher. Today’s candidates are in the final sprint to win the Iowa caucus goers votes and Hillary Clinton, Donald Trump, Marco Rubio, Jeb Bush and Bernie Sanders may want to take a look at how a one-term Senator from Illinois with little experience managed to take the prize the last time around.

It was a little more than 8 years ago that Barack Obama walked on stage in a hotel ballroom in downtown Des Moines in front of 500 Iowa farmers, environmentalists and rural political activists to make his case for why he should be the next president of the U.S.

That morning, as then Sen. Obama took the stage, his ultimate victory was a long shot. If you can even fathom thinking back to the realities of the late fall in 2007, Obama was considered a rising star in the Senate, but was still a distant third place in the polls in Iowa. On Nov. 10, 2007, when Obama walked to the podium, the media was still salivating over how Hillary Clinton would be the inevitable winner and John Edwards was most likely a lock for second place in Iowa. So much for polls and conventional wisdom.

By the time the day would end however, Obama’s stardom among Iowa Democrats would be launched into the stratosphere after he gave his now famous speech later that evening at the Jefferson Jackson Dinner, which campaign adviser David Axelrod called “the seminal event” for Obama on the ground in Iowa during the 2007 caucus.

As someone who witnessed Obama’s famous 2007 Jefferson Jackson speech, I can promise you that his speech that night in front of Iowa’s most active Democrats was what finally helped cinch my vote for him. I’d spent months following all the other candidates and working with each of their staff to promote sustainable food and agricultural policies to their campaigns and like many Iowans, I was still uncertain at that point, less than two months away from the Iowa caucus.

But my support for Obama that year finally came about because of the promises he made to Iowa farmers earlier that same day at an event that I organized called the 2007 Food and Family Farm Presidential Summit, hosted by the Iowa Farmers Union and the National Farmers Union, two progressive farm organizations that tried to provide a much needed counter balance to the political muscle of agribusiness front groups like Farm Bureau, National Corn Growers Association, National Pork Producers etc. that all pretended to work in farmers’ interests, but in reality represented the worst corporate abusers that rigged public policies against real family farmers and were slowly and inevitably working to grind them out of business forever.

Many of the farmers in the audience planted GMO crops or used chemical fertilizers and pesticides on conventional non-GMO hybrids, but they were fiercely opposed to the ever increasing consolidation in the food and agricultural sectors, which not only creates a massively unjust economic playing field for small and mid-sized family farmers, but also the growing trend of factory farms, which had sprung up across Iowa in the previous decade by the thousands and had already resulted in the loss of more than 72 percent of the state’s hog farms, which had until only very recently served as economic backbone of rural Iowa.

After barely surviving the Farm Crisis of the 1980s, these farmers were rushed headlong into the buzz saw of industrial agriculture as a result of bad public policies, that consolidated power and economic market share during the 20 years of the Bush and Clinton administrations, which mirrored the consolidation of power of corporate America, where small coffee shops, book stores and corner stores disappeared only to be replaced by Wal-Mart, the Death Star of rural America and other big box giants.

In many ways, Obama really was the first major politician to talk about the food, farm and environmental movements in a cohesive and meaningful way. He not only knew the dangers of industrial agriculture, but he wanted to chart a different path. It was clear to everyone in the room, that while Bill Clinton might have felt their pain, Obama knew exactly what caused it.

And Obama immediately had every farmer’s attention when he opened his speech with what can only be considered political manna with a pledge to be a different kind of politician from the type who made big promises during the campaign but shut them out once they got their vote—something Iowa farmers are all too familiar with.

“Because for far too long, you’ve had to listen to politicians tell you one thing out on the campaign trail and then close the door and do another thing in Washington when they make rural policy. You’re sending your message, but sometimes you can’t get through because there’s a lobbyist who’s already in line,” pledged candidate Obama.

Obama’s promise that day fell on welcome ears, especially for the farmers and environmentalists in the room who had fought against Farm Bureau and the Pork Producers for the past 15 plus years and were tired of watching elected officials from both parties abandon them when it came time to pass a law to protect Iowa’s family farmers, their drinking water and the environment.

“So when I hear other candidates say they’ll stand up to the special interests on the issues that matter to you —like CAFO’s —I’m reminded that the test of leadership isn’t what you say, it’s what you do. Voting records matter. And unlike other candidates who have changed their position on CAFO’s, I look at this issue as a matter of principle, not politics,” candidate Obama said.

Obama’s statement was a not so subtle jab at both John Edwards, who had voted with agribusiness and against a Packer Ban on livestock ownership by giant meat cartels during his one term in the U.S. Senate and Hillary Clinton, whose ties to Tyson Foods, the factory farm chicken giant from Arkansas, which were well known by all Iowa farmers and environmentalists.

But Obama really won Iowa not only because he promised a different kind of politics, but his campaign also took the time to listen to the concerns of average Iowan farmers and make them a part of his campaign platform. And for a farmer, what matters more to them than anything is making sure that as they work to grow food for other people, they can also make a living to put food on their own family’s table as well.

“For an expensive steak, a small farmer gets less than a dollar. For a loaf of bread, it’s a dime. That’s what happens when rural policy gets made in backrooms with lobbyists in Washington.

That’s what I’ll fight to change from my first day in office. And that’s what my rural agenda is all about. Leadership that finally works for rural Americans, not well-connected lobbyists.”

Obama’s lede in here couldn’t be more perfect, honing in on the economic betrayals farmers had faced in the marketplace and state capitols over and over again, setting the stage of betrayal in DC (only by his opponents of course) and then letting these farmers know what he was really ready to do if he was actually elected president.

“Here’s what I’ll do as President. I’ll immediately implement Country of Origin Labeling because Americans should know where their food comes from. And we’ll let folks know whether their food has been genetically modified because Americans should know what they’re buying. And I’ll use the bully pulpit to encourage folks to buy local because it’s better for the environment, it’s better for our farmers and it’s healthier for Americans. And we’ll stand up against conglomeration in the farm industry. That’s what I’m doing today by supporting the Packer Ban.”

Ironically, Obama received the biggest round of applause that day when he promised to honor the need for transparency in the food supply. And while the issue of Country of Origin Labeling or COOL was a hot topic at the time due to the 2007 Farm Bill fight, labeling genetically engineered food was not on any political radar at the time like it is now just 8 years later.

Today the politics of labeling GMOs is a white hot political issue, which has been pounded into a fever pitch with four ballot initiatives in the past 3 years, including California, Washington, Colorado and Oregon and the passage of three bills in Maine, Connecticut and Vermont and is currently boiling over with a major fight against biotech, chemical and America’s major food companies in Washington DC, who have for the past year been trying to pass a bill that would preempt state’s rights to label genetically engineered foods, something they already done in 64 other countries around the world.

For the most part, the White House has been mum on the issue, but I’ve been assured they’re well aware of the 1-minute clip of Obama’s 2007 campaign promise to label GMOs that I released at Food Democracy Now! in 2011 to support a Center for Food Safety petition to the Food and Drug Administration to require mandatory disclosure of GMOs in America’s food supply.

In reality, Obama’s speech that day 8 years ago and the progressive food and farming Rural Agenda that he pledged to Iowan farmers during the 2008 Iowa caucus launched the birth of the modern GMO labeling movement and catapulted the rise of the food movement during the past 7 years of his administration.

Today, I’m releasing this never before seen 14 minute video to help remind this administration of the pledges Obama made to Iowa farmers on the road to his remarkable 2008 Iowa caucus victory and in the hopes that it can inform our next president and their staff about what is really at stake in this election for America’s farmers and rural America and all our nation’s consumers no matter where they live.

Yeah, that’s right, Barack Obama promised to label GMOs in front of Iowa farmers and he won the Iowa caucus! This might be a time for other candidates to step up their game to stand for what’s good for the average American voter versus what’s good for corporate agribusiness’s bottom line. History is littered with candidates who can’t connect on the issues that really matter. I certainly hope there are some smart campaign staff talking sense to The Donald, Rubio, Cruz, Hillary and Bernie before caucus night, because Iowa voters have heard it all before and they have a pretty good sense of who might actually be able to make those campaign promises come a reality.

They say all politics is local, well there’s nothing more local than your stomach or the politics of food. Today’s politicians better realize that the food movement is coming for them, whether they realize it or not.