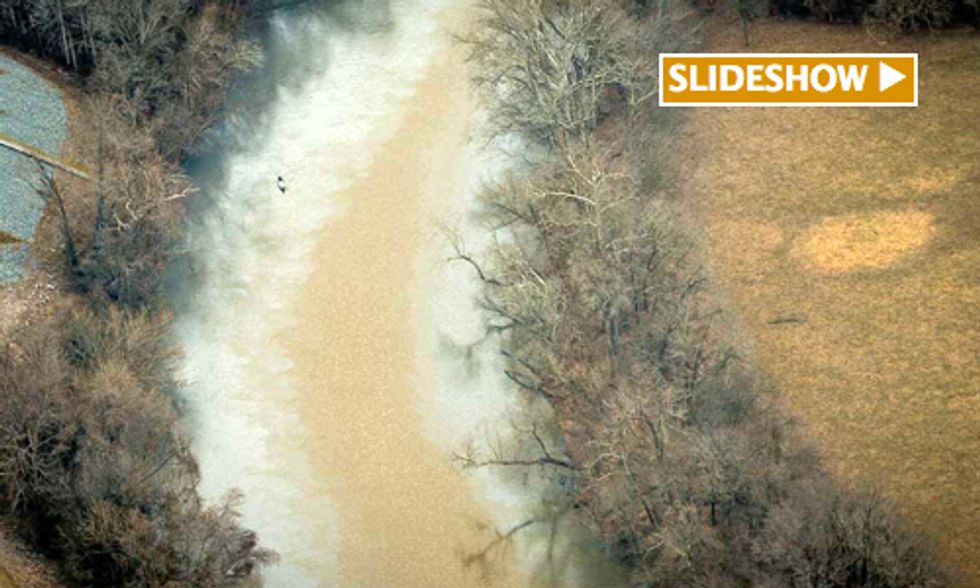 [This is the second article in a four-part series. Read part one, read part three, read part four.]

In the wake of what may be the third largest coal ash spill in U.S. history, Waterkeeper Alliance deployed a disaster response team to assess the damage and monitor remediation efforts by Duke Energy and the of North Carolina Department of Environment and Natural Resources.

The team, which included staff from Waterkeeper Alliance, Yadkin Riverkeeper and Catawba Riverkeeper, took to the air, land and water to track the situation at the spill site and downstream on the Dan River. Paddling in kayaks to the spill site, team members collected samples of water that are being analyzed for heavy metals and other pollutants found in coal ash.

The spill began the afternoon of Sunday, Feb. 2 when a stormwater pipe broke underneath the 27-acre primary pond and drained to the Dan River. Although state regulators and Duke Energy scrambled to get the spill under control on Sunday, they waited more than 24 hours before notifying the public of the spill on Monday evening. By then, an estimated 82,000 tons of coal ash and 27 million gallons of contaminated water had dumped into the Dan River, a public drinking water supply for downstream communities like Danville, VA. Tuesday late afternoon, more than 48 hours after the spill was discovered, thick, dark gray toxic coal ash sludge continued to flow out of the pipe into the river.

Toxic coal ash sludge continued to flow out of the pipe Tuesday afternoon, more than 48 hours after the spill was discovered:

Paddling in kayaks to the spill site, team members collected samples of water that are being analyzed for heavy metals and other pollutants found in coal ash:

On Tuesday afternoon, the Waterkeeper team discovered that the Dan River had turned completely gray as it mixed with the spilled coal ash waste. The pollution plume continues to move downstream into Virginia where public drinking water providers are “treating" the water drawn from the river to remove the pollutants before piping it to families and businesses. In what would appear to be a premature moment of celebration, Danville Utilities issued a press release Monday evening with the headline "Danville Utilities successfully treats ash spill into Dan River." On Tuesday evening, however, the utility had changed its tone, updating its statement and admitting that it had not even received water sample results until Tuesday evening.

As rain began to fall on Tuesday evening in the area of the spill, Waterkeeper's aerial and marine investigations discovered that Duke has still not constructed any containment systems to stop more ash from entering the river. Duke initially reported the spill volumes of 50,000 to 82,000 tons and up to 27 million gallons.

After Waterkeepers initiated enforcement actions for illegal coal ash water pollution at two Duke Energy coal plants in North Carolina last year, the state filed lawsuits accusing Duke of illegal pollution discharges from leaks in its coal ash ponds at all 14 of its coal-fired power plants in the state of North Carolina. This includes Duke's Dan River Steam Station in Eden, NC, about 30 miles north of Greensboro. Duke stopped generating electricity at the coal plant in 2012, however the ash remains impounded at the site.

While Duke continues to drag its feet and the state of North Carolina declines to require meaningful action, utilities in South Carolina have settled enforcement actions by Waterkeepers to clean up these dangerous ponds. “Why should South Carolinians receive better water protection than North Carolinians?" asked Catawba Riverkeeper Sam Perkins.

Water samples taken from the Dan River are at the lab. Check back with EcoWatch as Waterkeeper Alliance provides the results of those tests.