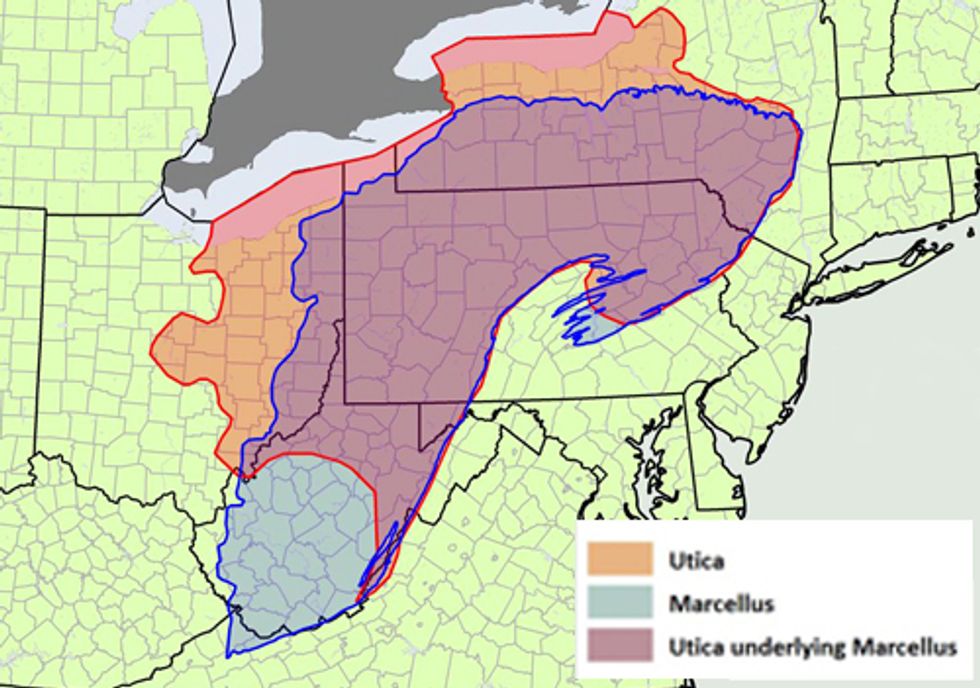 Ohio is the latest state hit by fracking mania. The process, which requires pushing millions of gallons of water, sand and industrial chemicals into shale wells to fracture rock and push out oil and gas, took off after the discovery of massive natural gas deposits in the Utica shale underlying eastern Ohio last July.

Governor John Kasich sent the message that Ohio was open for business, writing to energy company CEOs around the country, inviting them to partner with the state to make fracking, or hydraulic fracturing, a major component of his economic plan. Until last year, there were just a few wells operating in Ohio. There are now 40, and the governor’s spokesperson said next year there could be five times as many.

Kasich says environmental protections and regulations are important to him, but the free-for-all so far has meant people and the environment have suffered. Not only has the process been linked to earthquakes and water contamination in the state, but the industry’s deceptive leasing practices are increasingly causing alarm among Ohioans.

Early last October, Cunningham Energy, a West Virginia-based oil and gas producer, hosted a leasing open house at Ohio University, and More Welch, an Athens county resident, went to inquire about what it would mean to sell his mineral rights. Cunningham representative Drake Stevens permitted Welch to record the conversation, which was later provided to EcoWatch, an environmental media non-profit. The audio of the interaction, and the transcription of the conversation, reveals Cunningham representatives misleading Welch about the chemicals used in the technique and the terms of the lease, and quoting him a vastly under-market land price.

When Welch asks whether the company uses chemicals in the process, Stevens replies, “We don’t put any chemicals down in the ground. We just use regular, fresh water.” Another representative who identifies himself merely as John and says he does the negotiating, later backtracks and asserts that they use "sand and water with the household chemicals” like “Dawn, uh, dishwashing detergent.”

As he walks through the lease, Stevens implies to Welch that the landowner has a choice as to whether to renew the lease after the initial five-year term. “I believe if you don’t want to have the option to release we can just do a standard five-year lease,” Stevens says. The actual lease provided to Welch states the opposite. It stipulates that renewing the lease is Cunningham’s prerogative, that the landowner has no say in it.

Finally, when Welch asks what the company will pay per acre, Drake quotes him $200, dramatically less than market value, which is between $2,500 and $3,500 an acre, according to Russell Chamberlain, a real estate broker and owner of Athens Real Estate Company in Athens, Ohio. Cunningham Energy says the price per acre it offers depends on location and varies from $1 to $2,500.

When asked to respond to the contents of Welch’s audio, Joe Blackhurst, a land supervisor at Cunningham, who spoke with Welch at the open house, and whose name is on the lease provided to him, said, “I don’t believe our reps knew they were being recorded, nor did they give permission to be recorded.” In the recording Stevens does give Welch explicit permission to tape the conversation. Blackhurst went on to say, “Besides, what they [the Cunningham representatives] said is true. The chemicals we use are commonly found in common household cleaners under your cabinet.”

The mix of chemicals found in Dawn differs from those used in fracking fluid. Though only a small fraction of the liquid is composed of chemicals, when millions of gallons of water are used, it still means hundreds of gallons of chemicals are blasted into the ground, according to a report on the fracking technique by the New York City Department of Environmental Protection.

Democratic State Rep. Bob Hagan, of Youngstown, who reviewed Welch’s recording, responded to these wily industry practices. “There’s no difference between snake oil and shale oil salesmen,” he says. “This is absolutely one of the biggest rip-offs I’ve ever seen.” Hagan says these deceptive tactics, if not reigned in, bode ill for Ohio’s future. “It speaks even more of what is coming when people are taken advantage of like this.”

The trampling of Ohio landowner rights, along with public outrage over sparse environmental and health protections, has spurred a grassroots resistance movement in the area. A recent Quinnipiac poll found that 72 percent of Ohioans want to halt fracking until its impacts are further studied. The national Occupy movement has lent its support to direct action movements in many communities.

Public opposition has spurred bills that are currently stalled in the Republican-controlled State House and Senate, as well as public pronouncements by both the attorney general and the governor.

Hagan and other Democrats in the state legislature have introduced a spate of bills that would require disclosure of chemicals used in the process, and put a moratorium on fracking and underground wastewater disposal injection wells until the U.S. Environmental Protection Agency concludes a study on its effects on drinking water. Republican obstructionism, Hagan says, means the bills are stonewalled at the committee level.

However, just last week, Republican Attorney General Mike DeWine made a statement calling for the creation of an agency to protect and inform landowners of their rights in dealings with lease agreements for drilling, as well as tougher penalties on polluters and transparency with regards to chemicals used in the extraction technique. He said he would leave it up to state lawmakers to make the legal changes though.

In his State of the State this month, Republican Gov. Kasich reiterated his support for the industry, but also expressed a commitment to push for tough regulations on drilling. He was interrupted by protesters shouting “Mic check!” and “John Kasich, you’re selling out Ohio!” His spokesman, Rob Nichols, says the governor has not yet outlined specific policy plans.

Industry resistance and lobbying are fierce. Hagan accuses his colleagues of being “shills for the industry.” Common Cause, a watchdog group, found that in the last 10 years, the industry has spent $747 million lobbying lawmakers and making campaign gifts. Kasich received about $214,000 from the industry.

Hagan says he hopes Republicans in the state legislature will soften and back laws curbing the industry soon “because there’s a lot of safety issues at stake if they don’t do it right. Water could be contaminated, the environment hurt and people could really suffer.”

Welch agrees. “This industry is performing their job without any integrity.”

Erika Eichelberger works for The Nation Institute and is a freelance journalist. Follow Erika on Twitter at @erika_eee.