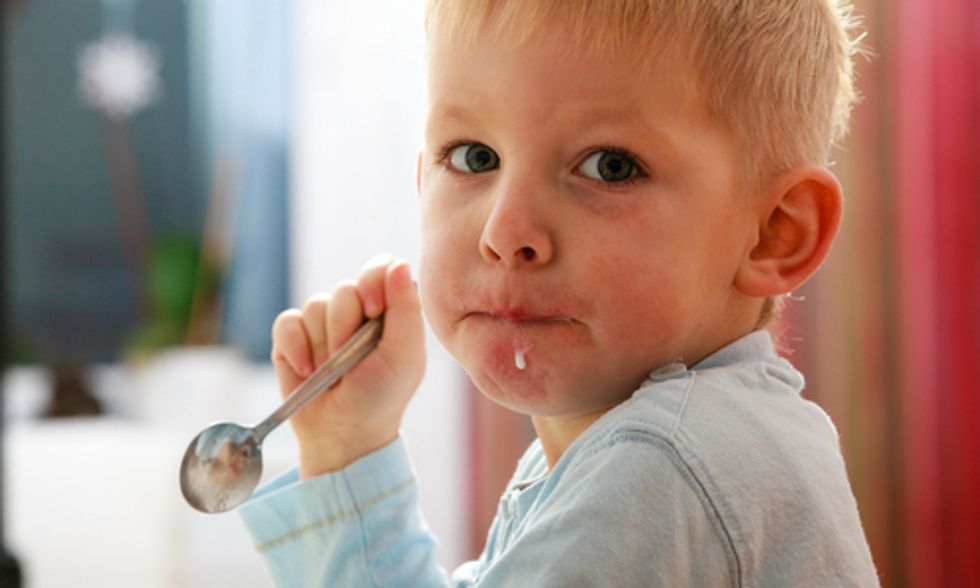 Nearly half of American kids age eight and younger consume potentially harmful amounts of vitamin A, zinc and niacin because of excessive food fortification, outdated nutritional labeling rules and misleading marketing tactics used by food manufacturers, according to a new report released by the Environmental Working Group (EWG).

The Daily Values for most vitamins and minerals date back to 1968 and were calculated for adults, not children.
Photo courtesy of Shutterstock

“Heavily fortified foods may sound like a good thing, but it when it comes to children and pregnant women, excessive exposure to high nutrient levels could actually cause short or long-term health problems,” said Renee Sharp, EWG’s research director and co-author of the report.  “Manufacturers use vitamin and mineral fortification to sell their products, adding amounts in excess of what people need and more than might be prudent for young children to consume.”

High doses of vitamin A can cause toxic symptoms and lead to liver damage, skeletal abnormalities and hair loss. Excessive levels of zinc can impair copper absorption, negatively affect red and white blood cells and impair immune function. During pregnancy, taking too much vitamin A can result in developmental abnormalities in the fetus. Older adults with high vitamin A intake have been known to suffer from osteoporosis and hip fractures.

EWG researchers based the analysis on data from the Nutrition Facts labels gathered by FoodEssentials, a company that compiles information on supermarket foods.

The report concludes that the federal nutrition labeling system, used on the vast majority of food products, relies on obsolete dietary Daily Values. The Daily Values for most vitamins and minerals date back to 1968 and were calculated for adults, not children. As a result, some breakfast cereals contain added nutrients in amounts higher than have been deemed safe for children by the Institute of Medicine, a branch of the National Academy of Sciences.

Compounding the problem, marketing claims on food packages, such as “added vitamins,” can induce parents to buy products because they seem healthier, even though they may not be.

“In other words, when a parent picks up a box of cereal and sees that one serving provides 50 percent of the Daily Value for vitamin A, he or she may think that it provides 50 percent of a child’s recommended intake,” said Olga Naidenko, Ph.D, an EWG research consultant and co-author of the report. “But he or she would most likely be wrong, since the Daily Values are based on an adult’s dietary needs.”

Graph courtesy of EWG's report,
How Much Is Too Much?

“The marketing of nutrient fortification suggests that getting ‘more’ nutrients equals a ‘more nutritious’ food option, yet from a health standpoint we know that to be false,” said Ashley Koff, R.D., a registered dietitian and former advertising executive for kid’s cereals and snack bars. “Research consistently shows that the nutrient amounts and types found in whole foods provide optimal nutrition as well as least risk. We owe it to parents and kids to make it easiest to choose better quality foods, which in this case means adopting the action steps outlined by EWG.”

The U.S. Food and Drug Administration (FDA) is currently accepting comments on proposed changes to the Nutrition Facts labels. EWG believes some of the changes would be a step in the right direction, but are still insufficient to protect children from consuming excessive amounts of fortified nutrients. EWG calls on the FDA to require that the nutrition labels on products marketed to children display percent Daily Values specific to each age group, such as one-to-three-year-olds and four-to-eight-year-olds.

In addition, EWG urges the FDA to:

Until the FDA takes these steps, EWG recommends that parents give their children products with no more than 20-to-25 percent of the adult Daily Value for vitamin A, zinc and niacin in a single serving. In addition, parents should monitor their children’s intake of fortified foods, especially if they give their children a daily multivitamin pill. EWG also recommends that pregnant women and older adults watch their intake of products fortified with vitamin A, especially if they take a daily vitamin pill.