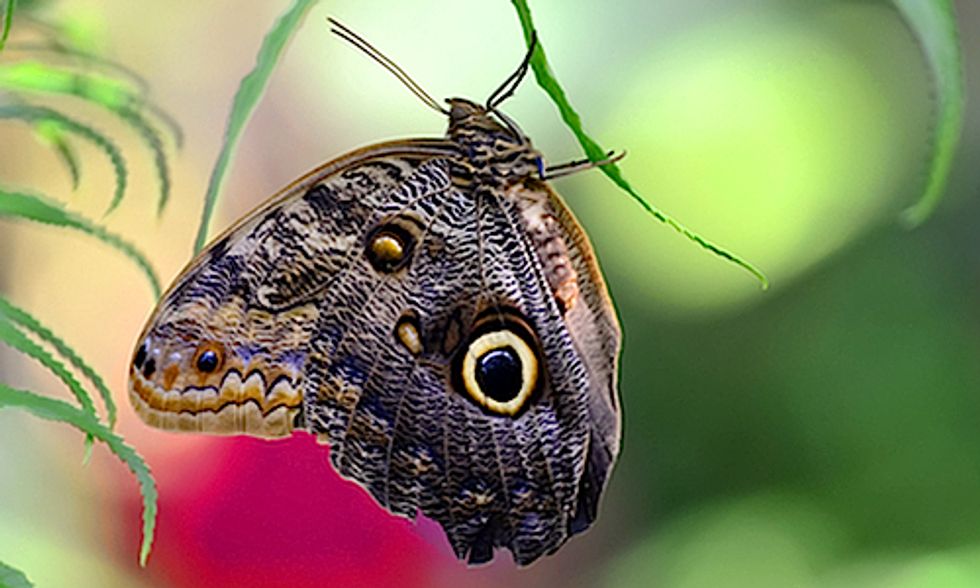 A new study of the colorful “eyespots” on the wings of some butterfly species is helping to address fundamental questions about evolution that are conceptually similar to the quandary Aristotle wrestled with about 330 B.C.—“which came first, the chicken or the egg?"

After consideration, Aristotle decided that both the egg and the chicken had always existed. That was not the right answer. The new Oregon State University research is providing a little more detail.

Butterfly "eyespots" are what scientists call “serial homologues,” or patterns in nature that are repetitive.
Photo courtesy of Shutterstock

The study, published yesterday in Proceedings of the Royal Society B, actually attempts to explain the existence of what scientists call “serial homologues,” or patterns in nature that are repetitive, serve a function and are so important they are often retained through millions of years and across vast numbers of species.

Repeated vertebra that form a spinal column, rows of teeth and groups of eyespots on butterfly wings are all examples of serial homologues. Researchers have tracked the similarities and changes of these serial features through much time and many species, but it’s remained a question about how they originally evolved.

Put another way, it’s easier to see how one breed of chicken evolved into a different breed of chicken, rather than where chickens—or their eggs —came from to begin with.

Butterfly wings are helping to answer that question. These eyespots, common to the butterfly family Nymphalidae, now serve many butterflies in dual roles of both predator avoidance and mate identification. One theory of their origin is that they evolved from simpler, single spots; another theory is that they evolved from a “band” of color which later separated into spots.

“What we basically conclude is that neither of the existing theories about butterfly eyespots is correct,” said Jeffrey Oliver, a postdoctoral scholar in the Department of Integrative Biology of the OSU College of Science. “The evidence suggests that a few eyespots evolved as a group at about the same time, but behaved somewhat as individual entities.”

Having appeared as a result of some genetic mutation, however, the eyespots then had the capability to move, acquire a function that had evolutionary value, and because of that value were retained by future generations of butterflies. And at all times, they retained the biological capacity for positional awareness—the eyespots formed in the same place until a new mutation came along.

The "eyespots" on this squinting bush brown butterfly, and other species like it, are helping to answer basic questions about evolution. Photo credit: Oregon University/ Flickr

“At first, it appears the eyespots helped this group of butterflies with one of the most basic aspects of survival value, which is avoiding predators,” Oliver said.

On the side of the wing that predators saw when the wings were closed, the eyespots could have served as camouflage from a distance, and up close almost a “bulls-eye” for a predator to see and attack. But this directed the attack toward the tips of less-important wings, and not the more vulnerable head or body of the insect.

“If you take this same concept and apply it to other important features like vertebra and a spinal column, it suggests that some small number of bones would form through mutation, and eventually move, join and be perpetuated as they acquired a function with survival value,” Oliver said.

“There would be a biological position in which they were supposed to form, and that would be retained,” Oliver said. “And over time, the vertebra might expand in number, and acquire other functions that had nothing to do with their original function, but which still had value.”

The evolution of life has never been simple, as Aristotle and the other early philosophers found out. But one bone or butterfly eyespot at a time, the pieces continue to come together.

Is This Moth Beating Climate Change?