EVENT: Fracking Protest at Ohio Gov. Kasich’s State of the State on Feb. 7 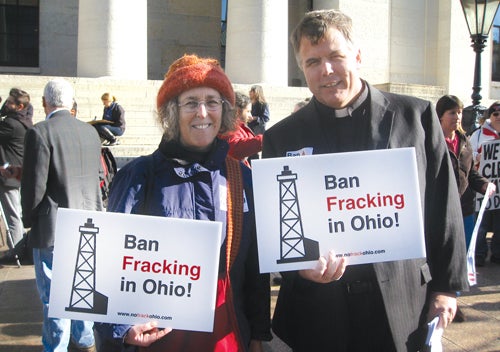 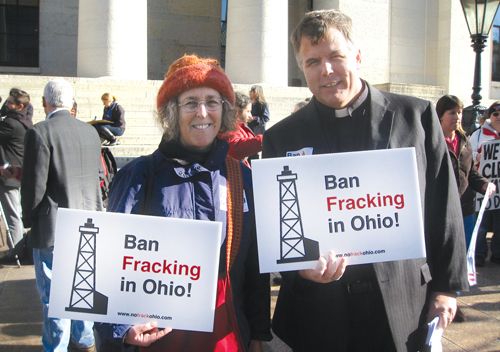 On Feb. 7, from 10 a.m. to 2 p.m., in Steubenville, Ohio, join Ohioans as they rally against the lack of regulation on the fracking industry, and Gov. John Kasich’s open door policy of natural gas extraction and fracking wastewater injection wells.

Ohio is home to more than 180 injection wells and receives nearly 50 percent of its fracking wastewater, that gets high-pressure injected 9,000 feet below the earth’s surface, from Pennsylvania, New York and other Northeastern states.

Ohioans are concerned for their health and safety as 11 earthquakes have riddled the Youngstown, Ohio region since March 2011, with a 4.0 magnitude hitting the area on New Year’s Eve. Experts have confirmed a connection between the fracking wastewater injection wells and seismic activity.

Ohio policy makers have been trying to push through legislation—SB 213 and HB 345—that would halt drilling operations for oil and gas extraction, and wastewater disposal injection wells until the U.S. Environmental Protection Agency finishes a study examining whether there is a link between fracking drill sites and contaminated drinking water, but are being stonewalled without these bills being heard in committee.

Attend Tuesday’s rally and speak out against the environmentally risky and not adequately regulated fracking industry. We must demand that the best interests of the people are represented with full transparency and full disclosure.

In addition to protesting fracking in Ohio, the rally will address the following:

Kasich isn’t standing up for us and someone needs to be fighting for our future and our communities.

We are at a make or break moment in Ohio. While our citizens continue to struggle, Kasich is giving away the state to his biggest campaign contributors.

Education. Environment. Voting Rights. Workers’ Rights. Attack after attack—Kasich and his allies are working for their corporate special interests, continuing to ignore the will of the people.

After the beating Kasich took on Issue 2, he knows the people are against him. So instead of having the State of the State at the Statehouse in Columbus, Kasich is breaking 200 years of tradition and running away to a small venue in hopes that no one will make the effort to travel there.

On Feb. 7, we will prove him wrong.  Citizens from across Ohio are going to come together and protest Kasich’s fire-sale of Ohio to his corporate friends.  We will show him that the 99% won’t sit back while he rewards his 1% campaign contributors.

Kasich has the wrong vision for Ohio. It’s time for Kasich and the rest of the politicians to do the right thing. The days of rewarding campaign contributors with Ohio’s tax dollars are over.

To RSVP to ride a bus to the rally, click here.

YOUNGSTOWN:
The bus is leaving from the First Unitarian Universalist Church of Youngstown, 1105 Elm St., Youngstown, Ohio 44505. Arrive by 9 a.m.