Even Without Exemption from the Halliburton Loophole, It's Still Not Regulated 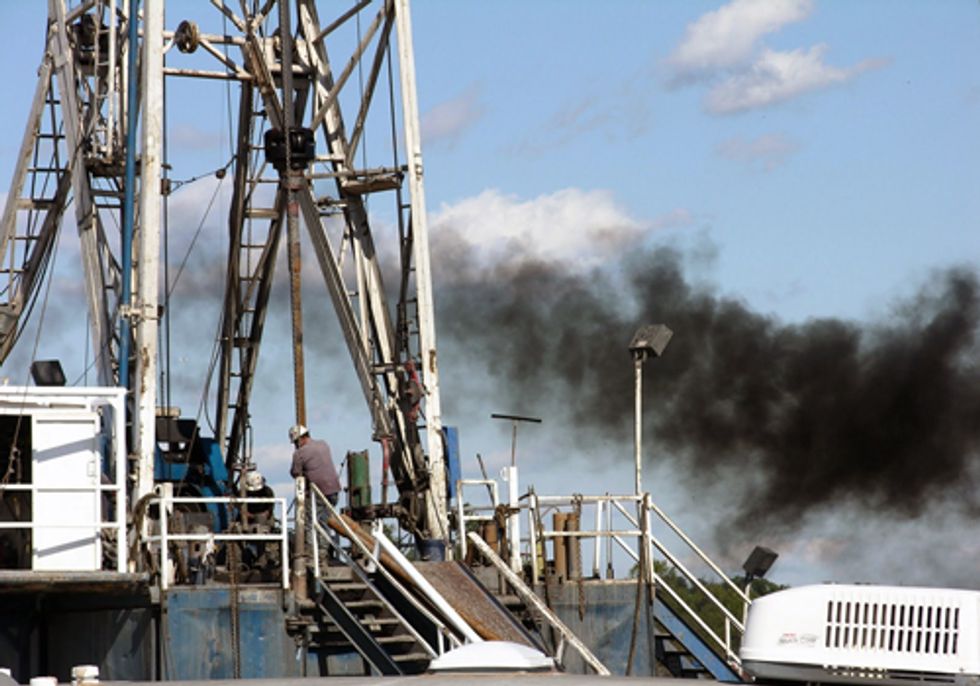 SkyTruth has concluded that diesel fuels continue to be used in hydraulic fracturing despite known health hazards and in violation of the Safe Drinking Water Act (SDWA). Analyzing a database of voluntary industry disclosures, we found that kerosene and diesel fuels #1 and #2 were used on 448 separate occasions in 12 states between January 2011 and August 2012.

When Congress passed the Energy Policy Act of 2005, it included the now-infamous "Halliburton Loophole," a controversial clause that excluded nearly everything used in fracking from being regulated by the U.S. Environmental Protection Agency (EPA). However, in spite of Congress exempting an entire Pandora's Box of chemicals and additives to be injected at high-pressure into the ground, diesel fuels remained off-limits, as seen in Section 322 of the Act:

Naturally, with all of the toxic chemicals being allowed by this exemption, one has to wonder what is so bad about diesel fuels to explicitly exclude them from this otherwise blank check? The reason is the toxicity of the volatile aromatic compounds benzene, toluene, ethylbenzene and xylene (also known as BTEX), which are known to the State of Maryland and many other agencies to cause respiratory problems from acute exposure (usually in occupational settings), in the long term to have toxic effects on the kidney, liver and blood, and benzene specifically has been classified by the U.S. EPA as a carcinogen. Not only do these health hazards raise concern about injection through groundwater supplies to shale layers deep beneath the earth, but also air transmission through flaring and fugitive emissions.

Now, when we searched our database for diesel fuels, we used the U.S. EPA's own draft designation for regulating diesel fuels, a list of six unique types of petroleum distillates that industry would have to seek a permit for to use in future fracking. Kerosene, (Chemical Abstract Service [CAS] # 8008-20-6) was the most used, a total of 278 times, although only four reports explain its purpose. Three reports in Alaska identified its purpose as a freeze inhibitor, one  in Texas listed its purpose as a corrosion inhibitor, but all the rest listed no explanation for its use.

We wondered why kerosene was identified by the U.S. EPA as a diesel fuel, so I found a paper identifying kerosene as a hydrocarbon chain with 8-15 carbon atoms, well within the 8-21 carbon atom chain that identifies diesel fuel in general. That particular paper was written to determine how petroleum distillate contamination in groundwater could be detected. Given that the authors found total BTEX values from kerosene contaminated water were even higher (2440 µg/l) than than that of diesel fuel (2140 µg/l) and fuel oil (1400 µg/l), I believe it fully deserves its place on our list as a petroleum distillate too dangerous to frack with.

Back to our analysis, diesel fuel #2 (CAS # 68476-34-6) was in second place, used 166 times across 11 states. This time  a wide range of uses were listed, mainly with some reference to acting as a gelling agent. The final diesel fuel we identified in our database was diesel fuel #1, which only appeared four times with no defined purpose.

However, this is not the first time fracking with diesel fuel has been brought up as an issue. In January of 2011, three legislators from the House of Representatives sent a letter to Lisa Jackson, administrator of the U.S. EPA, regarding their investigation on diesel fuels' use in fracking between 2005 and 2009. Representatives Henry A. Waxman, Edward J. Markey and Diana DeGette found that while the public and legislature had been led to believe that this practice had ceased even before the passage of the Energy Policy Act, "oil and gas service companies injected 32.2 million gallons of diesel fuel or hydraulic fracturing fluids containing diesel fuel in wells in 19 states."

The representatives' report did not state how many separate incidents they documented, only the volume, and while our database does not reliably calculate weight (due to limitations in the data source), we are certain that diesel fuels are still being used in fracking.

However, despite wide-spread assumption that industry had stopped using it in 2005 (on account of no permits being issued), there is another actor who bears responsibility for this continued disregard of the law: the U.S. EPA.

Note that earlier we said our analysis was conducted based on the fuels identified for regulation and permitting by the U.S. EPA's draft guidelines on this issue. The act was signed into law by President George W. Bush on Aug. 8, 2005, and the draft was only published  to comment in May of 2012. Industry has not sought or received permits for using diesel fuel in fracking, in compliance with the Safe Drinking Water Act of 1974, because the U.S. EPA does not yet have the framework to process such requests.

The frequency of diesel fuels' use in fracking, according to voluntary industry reports, appears to be on the overall decline. However, this information is not complete, as reports are not timely (check back soon for more on this subject), and reporting on this same issue by Energy and Environment Reporter Mike Sorgahan found that companies can go back and modify reports. We intend to keep a close eye on this issue in the coming months as the record is filled out.

Nevertheless, the ongoing disregard for the Safe Drinking Water Act is unacceptable, and must be addressed as soon as possible by both industry and our government regulators. The list of toxic chemicals exempted by the Halliburton Loophole is staggering, but to find that the one item still restricted is nonetheless being used without regulation or consequence is unacceptable.

Furthermore, we believe that access to the data which we used to conduct this analysis is far too complicated and legally restricted to serve the purpose of full disclosure. We will be writing more in the near future about the challenges we have encountered to even reach the point were we can conduct analyses of industry activity and point out these glaring problems.

Read more about SkyTruth's analysis on fracking: PART I: What 20 Months of Water Consumption for Fracking in the U.S. Looks Like and PART II: Underwater Park—A Visualization of 20 Months of Frackwater in NYC.